Jokes and Riddles: A Reflection and a Review 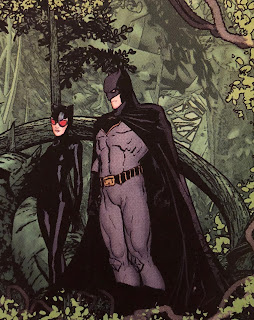 I think I have had an interesting relationship with Batman comics over a lifetime of comic book reading. Sometimes I really love the comics and sometimes I just can’t be bothered. Perhaps this is a result of Batman being such a great, malleable character. Any creative team can come into the Batman comics and have their version of the Bat. Even with differing variations and alternate takes on the character in TV, films, and animation, comics probably vary the character the most.

Think about it. To Frank Miller, Batman is more often a terrorist or freedom fighter. He’s an uncompromising man fighting a war. Grant Morrison approached him as a man of adventure, then a man in the midst of a mid-life crisis, and finally as a man setting up crime fighting franchises around the world. Jeph Loeb’s Batman had trust issues because everyone he got close to ended up betraying him. He was marked by his failures. Scott Snyder’s New52 Batman seemed odd to me, but I think it was because at the time DC wanted to eat its cake and have it too by having a Batman with history (hello four Robins) and who was also supposed to be young enough to still make mistakes because he had been Batman for only about a decade. You get the picture. In the film The Dark Knight, Batman says he can be whatever Gotham needs him to be. I think he can be whatever the writer and artist want him to be as well. 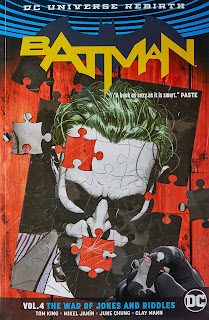 I can rattle off multiple Batman stories I’ve enjoyed over the years. I enjoyed Batman Year One, Batman Year 100, Batman The Killing Joke, Batman Gotham By Gaslight, The Long Halloween, The Dark Knight Returns, Batman: Knightfall, Batman: KnightsEnd, and many others. The trick is, except for a couple of exceptions, I prefer the non-continuity stories. In fact, the main thing I like about in-continuity Batman has always been the Bat-family of characters: Oracle, Nightwing, Robin (Tim Drake), Alfred, Batwoman, Spoiler, Cassie Cain, etc. This is why since DC’s Rebirth line began, I’ve adored Detective Comics for showcasing those secondary, and quite frankly, more interesting characters.


Not too long ago I was in Cosmic Comix (the best comic shop ever), and we were talking about Batman. The employees lavished all kinds of praise on Tom King’s current run on the Batman comic. King’s name is starting to develop quite the following with his work in comics in general recently. He might be mainstream superheroes’ new golden boy. I tried to remember why I wasn’t reading it and then I did: I tried, but the superheroes of Gotham and Gotham Girl annoyed me. So I abandoned it almost immediately.

“It got way better,” David told me.

“Where should I start?” I was tentative to try it again. King had developed a fanbase and I had pretty much stayed away from all of his work up until that point.

“Start with Volume 4,” they told me. “The War of Jokes and Riddles”. Start there.

I did, and so here we are. Mild Spoilers to follow. You’ve been warned. 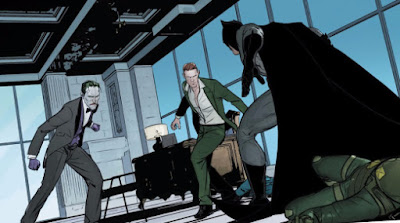 “The War of Jokes and Riddles” chronicles a gang war between the Riddler and the Joker following an altercation where the Joker left the Riddler for dead. This event happened early in Batman’s career and he is telling this story to Selina Kyle one night while they are in bed together. Bruce has a confession to make, a sin to share, and one that he claims none of the other Bat-family members know about.

As Batman relates the story to Selina, readers discover that many of the Batman’s Rogue’s Gallery took sides in this gang war with the citizens of Gotham and the police caught in the crossfire. Tensions escalate culminating in a final showdown of sorts where Batman’s “sin” is revealed.

I genuinely liked this story. I may have even loved it. I do think it is one of the strongest Batman stories I have read in a very long time. I like Batman’s “voice” and I like that he’s a bit more complicated here than in some other versions of the character. His “sin” isn’t as big a deal as he makes it out to be given the outcome, but it shows that he was driven to a breaking point and he carries enormous guilt about it. He has enough guilt that he shares the story with Selina, a woman he wants to marry. (I rather like this idea.) I find Batman's internal struggles, his desire to share his life with Selina, and the obstacles he goes through to make him a much more relatable character than I'm used to reading. I dig it. 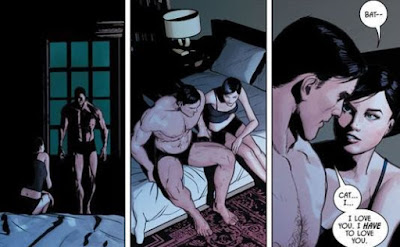 The art chores are primarily handled by Mikel Janín and Clay Mann. Both complement each other well, though they have differing styles. The scenes between Bruce and Selina are extremely sexy in a non-graphic way through Janín. Mann’s art is very expressive, and his grumpy Joker is wonderful to behold. 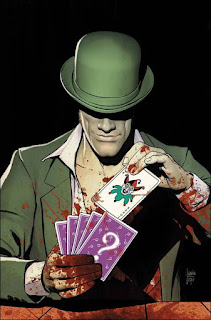 The story is extremely engaging and won’t leave readers disappointed. There are a number of nonsensical ideas that King puts into the book that he somehow manages to sell and make work for the good of the story. Ideas like Deadshot and Deathstroke’s four-day standoff and Bruce Wayne’s dinner for Riddler and Joker to try and workout a ceasefire among them. Still, even as crazy as those ideas are, King gets readers to buy into them. I also really love his unique version of the Joker. Part of the problem in the story is that the Joker can’t seem to find anything funny anymore and he’s a violent, grumpy, shadow of himself.

The Riddler is the most difficult for me to enjoy. King’s Riddler is cool, suave, dashing, and a villain to the core. He kills, he maims, he even has a child poisoned to further his agenda, and I’m not sure if I’ve made peace with this version of the character. Not yet.

Hell, a handful of years ago, Paul Dini introduced Riddler as an anti-hero detective in Gotham trying to show up Batman. I kind of liked that version. He wasn't a saint by any stretch of the imagination, but I liked how the need to solve riddles drove him to do good. 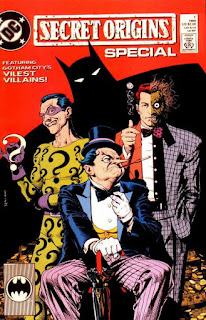 Decades ago, Neil Gaiman wrote a brilliant Riddler story in a Secret Origins Special. In the story, a newsman who is trying to claim that it is Batman who has made the criminals victims, interviews the Riddler. Riddler tells of how much fun it used to be, matching wits with Batman, sending Riddles to the police, being chased, arrested, and breaking out to do it all again. But he says it isn’t fun anymore, because no one used to get hurt, it was all just a game, and now the other villains don’t play the game anymore. This version of the character was sad because the Joker was killing people now. It is wonderful because the short tale speaks to a more innocent time in the comics, almost like a trip down memory lane, to when the villains robbed banks, not killed, tortured, poisoned, or anything else we see villains do in the modern era of comics. It is as if the 60’s Batman TV show version of the Riddler has come to a modern Gotham City and this version of it broke his heart.

So you see, the Riddler of King’s Batman comics is that kind of villain now. And as much as it works for the story, I’m not sure I like this version of the character. Maybe time will change that. I think my problems with it are my hang-ups, after all.
Ultimately, I’m going to have to read the other volumes now. I have to see how the Selina/Bruce relationship plays out. I want to know what other outrageous things King makes work in his Batman stories. I want to know more about King’s version of Batman.

He’s got me hooked.

Give this volume a try.

I think it’ll hook you too.