Since we had to clean up the house for the graduation party last Sunday, I had the opportunity to finish rearranging some of my shelves in our study.  I thought I'd share some of the displays with you just for fun, highlighting some key features or items.  As much as I love to have all the HC trade dresses match, I've realized the benefit of mixing things up with a combination of books, toys, collectibles, etc.  My main problem (other than not enough shelf space) is that I like too many things, not just the quantity, but the diversity.  While some may be satisfied with collecting a single character, such as Batman or Spider-Man, I like just about everything. "Reading from top to bottom [mostly]...Lisa...Carol...Fremont."

I've had to split this up, since there is a limit of the number of pictures I can upload, apparently. 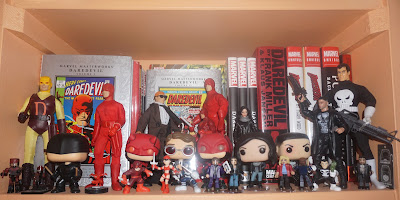 Daredevil has superseded Spider-Man as my favorite hero these days.  I like to be able to showcase some of the covers of my hardcovers.  The Marvel Netflix shows have been really good and I just finished the Punisher one (better than any comic he's ever been in).  I'm a big fan of POP figures and the different scales of minimates, POPs, Super Hero Squad, etc allows everything to be seen. 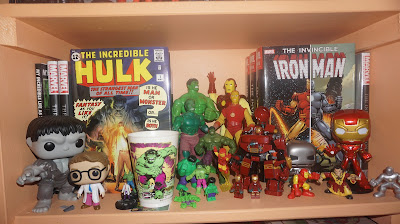 The MEGO Hulk and Iron Man (with nose) I've had since I was little.  The 1977 7-11 Slurpee cup with Herb Trimpe art was a recent FCBD purchase for only $5.  The Grey Hulk/Banner POP set came from the Marvel Collector Corps box series -- the last cool one before they went lame and then went defunct. 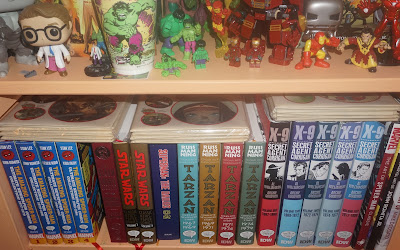 All my newspaper strip HCs, except for Prince Valiant, which are in the bedroom.  One more Star Wars HC to go (best Star Wars comic EVER by Archie Goodwin & Al Williamson).  On top is the Wednesday Comics series from DC. 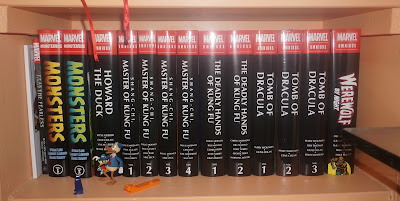 My son's graphic novel is on the side.  The only volume I've read completely is Howard the Duck, which still reads well today.  The figure came from Toy Biz and was packaged with a Silver Surfer for some odd reason.

Email ThisBlogThis!Share to TwitterShare to FacebookShare to Pinterest
Labels: Collections