The story of a genetically engineered warrior and her growing disillusion is the anchor to the story and makes it well worth the read in and of itself.  Forever Carlyle, in the 5 years of the publication of the story so far, has grown from a tool of her Family by interactions with others also bred as warriors for their Families and her own investigations.  Though still a warrior for her Family, she knows how and what she is but has yet to determine her place in the world.

I've posted about this book previously, but the times require mentioning it again.  Greg Rucka and Michael Lark's master work, which started long prior to the regime seizing power, has proved prescient. 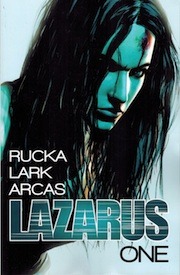 Where Rucka and Lark have excelled is creating the world in which Forever exists.  Taking the corporate control of our world to a logical but not implausible extreme, they posit that corporations controlled by Families have taken control of the world and carved it into fiefdoms reminiscent of feudal Europe.  Governments no longer exist.  Administrative functions of government exist but are subservient to whatever family controls the territory.  Those who provide useful service to a Family are Serfs. These are "skilled" workers or police/military.  They have a modicum of economic security, though are always less than Family and in danger of losing everything they have at the whim or disastrous decision of Family.  The vast majority of the world's population is Waste.  Low skilled and simply unneeded by Family to protect and promote Family interests, they eek out an existence and hope to develop, in some way, skills that the Family might consider useful.


Like feudal Europe and life in our own regime, competence is subservient to sucking up.  Skills can get a person from Waste to Serf, but everything else is subject to someone above being stroked.  No civil service or even a lame ass human resources.  Who you know is how you go.  And that's at the better operated Family of Carlyle.  Other Families are even more capricious and wont to simply kill those of lesser value.

Rucka and Lark have grown the world of their story from a focus on Forever.  Even the earliest issues of the book contained large amounts of back matter that expanded on the world and expounded on Rucka's sources and influences in our own world in creating this world.  An entire series, X+66, was devoted to the stories of other characters in the Lazarus world, and there have been at least 3 Sourcebook books that go into detail on the workings and world of an entire Family.


In North America, the continent is controlled by 2 warring families, Carlyle and Houck.  In the beginning of the story the warring is cold, jockeying for position within the umbrella of Family influence in parts of the world, but before long there's direct combat that pits all the Families for or against one another based on alliance with either Carlyle or Houck.


Interestingly, both family heads are men who are preternaturally old.  Carlyle has extended his lifespan through genetics.  Houck has done the same through drugs.  Each has devolved his outlook to his Family so that Carlyle's warrior, or Lazarus, is a creation of genetics while Houck uses a drug fueled army as his primary means of war.  Not that Carlyle doesn't have an army.  It has a very well trained army, including an elite corps that works with its Lazarus.


The research that has gone into creating this world has resulted in a fantastically detailed depiction of a technologically advanced feudal world that mirrors the ever increasing power of corporations in our own world.  The fact that we're now subject to the whims of a failed businessperson and celebrity game show host is right in keeping with how the Lazarus world is at war because old white men had to assuage their egos by creating enemies and killing them.  In many ways it's depressing to read Lazarus, but as a cautionary tale it's extremely effective.  It's always been a good time to read Lazarus, but there's no better time than now.