HOW COMICS WORK by Dave Gibbons and Tim Pilcher -- A Review 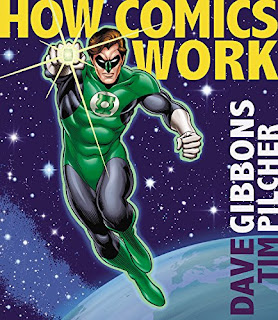 Sometimes writing for this blog can be like Mission Impossible.  Jim will forward an e-mail he's received inviting anyone of us to review something by somebody.  You know "your assignment, if you choose to accept it" type of thing. There is no pressure and it's totally on us as to whether we participate -- he just throws out the contact information.  I've rarely (if ever) taken the gig.  I mean, this reinvigorated blogging exercise is just for fun, an extracurricular activity to our already busy lives and National Debt sized comic book reading backlog.  It would have to be something really special for me to commit to completely reading and reviewing the product. This time, it was a no-brainer for me to accept, like a "must-have" impulse purchase (such as the $10 Space: 1999 Eagle seen in one of my recent "Shelf Expressions" posts), and I responded immediately (beating out Lee).  Boy, am I glad I did.  Not only was the experience thoroughly enjoyable, but it had an unexpected side-effect...it ENHANCED my comic book reading!!!

[See the rest of the review after the break]

At 192 pages, this book is a remarkably quick read.  It really depends on how "deep" you want to get into the material.  Dave and Tim use just the right amount of words with the examples to convey the concepts.  The book consists of seven chapters: Scriptwriting, Visual Groundwork, Sequential Storytelling, Lettering, Coloring, Design, and Exercises.  The picture below shows the full table of contents, including all the sub-headings within each chapter.  The "Early Influences" discussions are a welcome inclusion, since everyone is inspired by someone.  I also enjoyed the spotlight discussions that focus on a particular creator that is an expert in a particular category.  To further round-out the "praise-for-others" is a detailed Bibliography and Further Reading section. I found the Lettering and Coloring sections especially informative as I'd never read about them in such detail before.  I had purchased an Ames lettering guide after I bought The Official Marvel Comics Try-Out Book in 1983, but I never knew how to use it! I've always appreciated comic pacing on an instinctual level, but reading how text choices and panel grids helped set the speed of the story was eye-opening to me.  I just hadn't given it much thought before.  I caught up on about 9 months worth of John Byrne's Star Trek: New Visions photoplays after reading up on word balloon placements and I could really see how well things flowed together.

There are so many practical tips included in this book.  The rule of thirds is a common art term, but I liked how Dave focuses on the hot spots to guide the readers eye.  His advice to keep the thumbnails quick so as not to invest too much time that might later need to be redrawn was great. I wish the Exercises chapter had been longer, but the ones included are simple enough to inspire anyone to try them, and I can envision how useful they would be. I even want to try the adaptation one myself. (I'm also planning on encouraging my daughter Charlotte to read the book and try the exercises before our Artist Alley (Who's Mannz table) appearance at the Baltimore Comic-Con in September.) The book itself is it's own example of great graphic design.

I grew up reading the classic How to Draw Comics the Marvel Way by Stan Lee and John Buscema.  This book could have been easily titled "How to Create Comics the Dave Gibbons Way" but wisely they chose the more generic/universal title, How Comics Work.  While the book showcases Dave's masterful work, it's meant as a primer to develop your own spin on the concepts presented.  It teaches you the in-depth language of comics, which allows you to go beyond simple entertainment to the appreciation of the skill and intention behind every aspect.  It elevated my comic reading experience.

Honestly, I've been a lazy reader.  Not that you should have to study a comic to enjoy it, it's got to work on that "entertainment" level and in fact as this book illustrates the best comics achieve that by utilizing the concepts so well that you don't even notice them.  However, you might be surprised at the wealth of  pleasure you get when you examine the master painter's brushstrokes.

While I, unfortunately, no longer have Dave's Watchmen comics to reread, I do have his Green Lantern issues from the mid-80s and I'm anxious to read them again with "new eyes".  I also want to reread his Kamandi strip drawn by Ryan Sook from Wednesday Comics and his World's Finest mini-series drawn by Steve Rude.

A huge THANK YOU to Lydia Anderson of Wellfleet Press, an imprint of Quarto Publishing Group, for sending me my own physical copy of the book and for giving me the opportunity to review it.