My reading of comics is somewhat sporadic. I have a ton of new comics to read, old collections I want to re-read, regular books and various news articles. What this means is that it is often that I’m reading something which is old news in the comic book world. Still I finished three series recently that deserve mention. Doctor Star by Jeff Lemire and Max Firuma, Grass Kings by Matt Kindt and Tyler Jenkins and Harrow County by Cullen Bunn and Tyler Crook. All were complete stories with a beginning, middle and an end. In addition to that I also don’t want my column to miss out mentioning the death of Steve Ditko. So let’s take them one at a time. 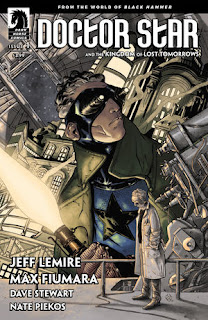 First off is Doctor Star. Jeff Lemire and Dean Ormistad have created what is an analogous version of the DCU with Black Hammer. From that series Jeff has spun off some mini-series and one was Doctor Star. Written by Jeff Lemire and brought to life by artist Max Fiumara and colorist Dave Stewart. It is a story about making choices, being heroic, being a father and being a husband. Jeff pays homage to the DC Starman series by naming Doctor Star James Robinson. It is a story that interlaces adventure and heroics with Greek tragedy.  The story is one that draws on the familiarity of knowing DC super heroes but ultimately, I believe can be read without any prior knowledge. It is more of an Easter egg type thing as it adds to the enjoyment if you know it, but you are not missing anything if you do not know it.  The choices our hero makes are done for good and altruistic reasons. As a hero and with the instinct to help others you would find it hard to blame him. Sadly, those choices cause untold pain and heartbreak to his family. The ending is both sad and wonderfully touching. If I was the type to tear up, this story would have made me do it. I’m being purposely vague about details because I want to encourage any reader to go out and buy this book or I’m sure a forthcoming trade. 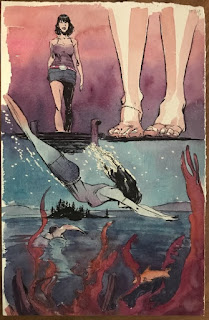 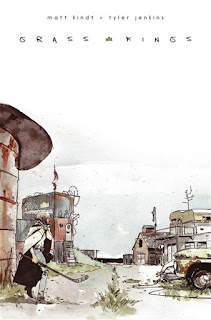 Second up is Grass Kings by Matt Kindt and Tyler Jenkins. The story is about a group of people who have decided to live off the grid. Inside of this setting Matt has built a story about the loss of a child and wrapped it up in a fantastically well-done murder mystery. What is so surprising about the series is that I never even felt like it was a murder mystery the whole time because the character development was so well done that I got wrapped up in knowing the players.  You really don’t need to know anything else about the story other then it is a complete story. It does leave room for future stories about the Kingdom. Matt is at the top of his game the last few years and basically if Matt is writing it, I’m at least trying it. I’d be greatly remiss if I failed to mention the art. Tyler Jenkins painted art is gorgeous. It takes Matt’s story to a whole new level and fits the story to a “T”. I loved the work so much I purchased a page from the series (seen here). The best part about this page it is absolutely the page I wanted. 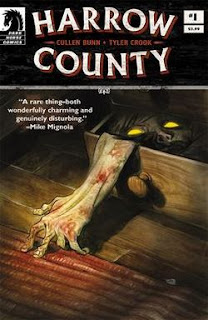 Third is Harrow County by Cullen Bunn and Tyler Crook. Now Cullen is a writer who I am beginning to enjoy more and more but only his independent work. Cullen and Tyler tell a story over 30 plus issues of a young girl who discovers she is a witch and how she handles her origins and everything about Harrow County. I loved the ending as it wrapped up everything in great fashion. Over the course of the story we meet many “Haints”, supernatural creators of all shapes and sizes. We meet Emmy, the main character, family, friends and extended family. You often wonder if she will make it out alive and in one way she ---- no, no spoilers. I will add that the skinless boy was one of my favorite characters in the series. Highly recommended, seek out the trade paperbacks and buy Volume 1, if you like that you will love the rest.
All three of these writers are gentleman who have been in the industry for a decent amount of time. All 3 have held jobs or still hold jobs at the big two, but all 3 shine the brightest with their creator owned work. For me the prospect of stories having a begging middle and an end is a major plus.  At this point in time I would say Jeff, Matt and Cullen are 3 of the top writers in comic books, with Tom King as another great story teller. 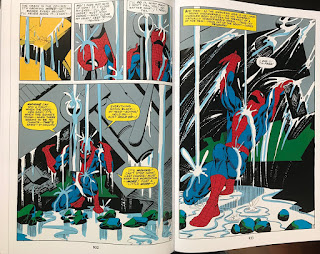 Finally, a quick tribute to the man, the myth, the legend Steve Ditko who died recently, reportedly alone as that was how he lived most of the last few decades of his life. Best known for Spider-Man and Doctor Strange, but the litany of characters he created include The Question, Mr. A, Static, Hawk & Dove, the Creeper and many more. That doesn’t include all the villains he created. Steve was a follower of the Objectivism Philosophy of Ayn Rand, which helps explain his very black and white view of many situations. Still he was the writer and artist for perhaps one of the best comic book stories every done, Amazing Spider-Man #31-33, the original run. The two-page spread shown here are images forever locked in my memory. The life lesson I took from that book as a young child was you must do the right thing no matter the personal cost. I have tried to live up to that ideal most of my life and have fallen short, but I have also often achieved that goal. My personal philosophy has been better to die with my principals then to live with them compromised. Steve’s future work is often over looked and criticized by many.  Personally, as I read more of his writings and his later books he raises interesting questions and things worth pondering. Whether one agrees or disagrees his viewpoints are at least worth considering.  Steve Ditko was a one of kind talent whose work will live on achieving him some level of immortality. 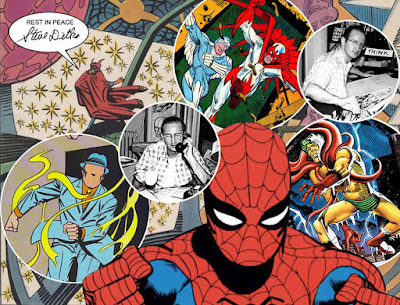