This week I wanted to talk about something a little different from our normal topics.  Don't get me wrong, I'm still going to talk about sequential art but it's not American sequential art.  This week I read Erased volumes 1-4 by Kei Sanbe.  Why? The first reason is because the four volumes are the complete series.  I knew up front that I was going to get a story with a beginning, middle, and more importantly an ending.  Far to many series don't have any type of ending and it wears me out.  The second reason is that Yen Press collected the story in four oversized (for manga reprints) hardcovers.  I'm a sucker for deluxe collections so this was an easy buy for me. 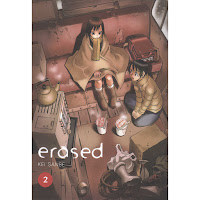 The story revolves around Satoru, a struggling manga artist who is emotionally lost and can't seem to find anything to fill the voids in his life.   To complicate things, he periodically has "revivals" which cause him to go back in time 3-5 minutes to avert some accident.  An early incident has him reviving back 5 minutes to prevent a young boy from being hit by a car.  During one such event, he encounters the serial killer who terrorized his town as a child.  In order to prevent the killer from murdering his friends, Satoru travels back to his days in elementary school in an attempt to stop the murderous spree before it ever starts!

The story is a simple riff on "if you could do it again what would you do differently?" with the added twist of a serial killer.  The events of the past are the driving force for the two-thirds of the story.   It's a masterfully executed game of cat and mouse between our hero, now a 10 year old boy, and the unknown serial killer with periodic forays into the present to see how or if things are changing.  This part of the story quickly sucks you in and the pages fly by.  The last third is all set in the present day after our hero discovers the killers identity.  While entertaining it's not nearly as exciting as the first part and it becomes a little bit of a slog to the ending.

It's not quite fair or accurate to say the last third is a slog because, to be honest, I'm a lazy reader.  There's an aspect to the series in which Sanbe explored the emotional voids in the various characters lives.  Each of the main characters was damaged in some way and had trouble connecting with others and/or finding meaning in their own lives.  While, I really enjoyed the cat-mouse aspects of the book, I just "read" the emotionally insightful stuff.  The last third really brings the emotional conclusion to the story.  Our hero grows (bleh) and his growth makes other people better (double bleh).

Don't get me wrong, I recognized it and realized it was being executed brilliantly but it's not my cup of tea.  So, yes, there's some interesting emotional explorations in the book that I shouldn't really comment on.

Overall, this is a highly enjoyable series and if you're willing to analyze the emotional stuff it's even better than that!