written and illustrated by Drew Brockington

Recommended age: All ages!!! Best for reading with your kid(s) or independent readers up to middle school 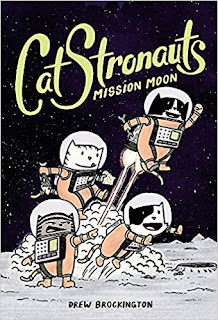 As a space geek I am always attempting to show my son how the awesomeness of everything space. This means I have dragged him to the Smithsonian Air and Space Museum twice in the 5 years he’s been around (we do not live near DC), taken him to a local Planetarium, made him watch Apollo 13 with me, gone with him to the Kennedy Space Center (I tear up every time I see space shuttle Atlantis), and generally geeked out on all things space. Finally, I was gratified to hear he told his teacher he wants to build rockets when he grows up – previous future jobs have included Batman, the Doctor, and Lego builder.

In all seriousness I don’t actually care what he does when he grows up as long as her sticks with the morals he’s learned from Star Trek TNG and comic books. Oh, and as long as he can generally support himself because I don’t want him living in the basement when he’s 35 or whatever. Still, I was pretty excited that he’s been on a rocket building career kick the past month or so and I found this great all ages comic book, CatStronauts, to work with his interests. 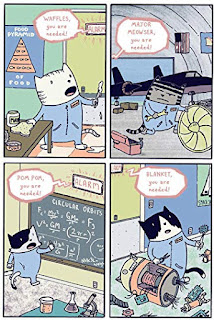 This book was a lot of fun. The art is appealing and accessible. My son easily followed the plot and really liked the various characters (especially Waffles, the pilot, and Blanket, the robotics expert). The book had easy to understand jokes for a young kid and was still entertaining for me to read – because it let me geek out on space stuff! My son has even quoted the story and told other people about it so I know he really enjoyed it.

The characters are cute. Waffles is always hungry leading to some mischief and Blanket is building a robot during training without permission. Major Meowser is a pretty straight forward mission commander, and Pom Pom doesn't get much of a chance to shine in this book but I hope the characters will become more developed in the other stories.

I loved the premise of the story as well. The cats have to return to the moon to build a device that will help provide energy to the Earth so all the power doesn’t go out forever. All the mission training the CatStronauts go through was decently researched. The launch and trip to the moon (and back) were based on fairly accurate information from the Apollo missions. Basically, I was super excited to have such a fun and kid friendly way to teach Henry about the moon missions.

The story also includes problems with the mission somewhat reminiscent of the Apollo 13 mission (along with problem solving strategies). My son's favorite page is below. For whatever reason Waffles saying "prepare for lunch" cracked him up over a few days. 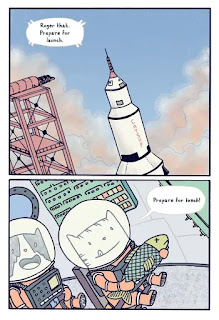 Not a whole heck of a lot!

My only complaint is none of the astronaut characters appear to be lady cats. However, the head of mission control is a lady cat so that's cool. Also, you can only tell because the ladies have visible eyelashes so who knows, maybe I'm mistaken and Pom Pom the mission specialist is a lady cat. It's a minor quibble.

Beyond that, it’s not really a book most adults would enjoy reading more than once unless they want some very light reading. However, if you want a fun, entertaining, and even somewhat educational book to read with your kid(s) -or a book for maybe up to middle school for an independent reader – this is an exceptional choice. We will definitely be purchasing other books in this series. The next one up is about the CatStronauts going to Mars - I am super excited!