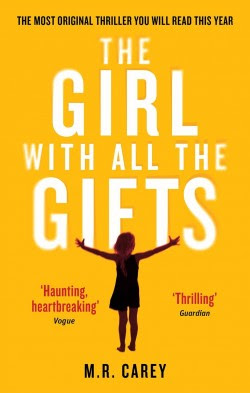 And for something different this week... a book review.  A book WITH NO PICTURES!!! I know, I know that goes against the principles of ComicsAnd... but bear with me because it'll all make sense.

Anyway, over the past couple of weeks (I'm a really slow reader) I read The Girl With All The Gifts by M. R. Carey and then I watched the movie! Why did I finally read a book after all these years?  Well, would it help if I told you it was written by M. R. Carey?  Probably not but M.R. is actually Mike Carey of Lucifer and Unwritten fame.  Since I loved both of those series I was willing to take a chance on his prose.

The setting is standard zombie apocalypse fare with a plague having wiped out most of civilization and the survivors struggling to well... survive against hoards of zombies and other random bad types.  The story revolves around Melanie, a little girl who has a zombie metabolism and appetite but still has her ability to reason.  She, and other children like her, are kept in a prison where they are being studied in hopes that they might possess a cure for the other zombies.  In an obvious turn of events, the prison is invaded by outside forces, and Melanie and several of her keepers must travel across England to a safe haven.

The book, as expected, is well written but not without it's flaws.  The prison scenes with the zombie children was very entertaining and added new wrinkles to the genre.  Unfortunately, once outside the prison there were many events which are zombie movie cliches.  They were well executed but cliches none the less.

And, it's the ending which makes this book special.  Carey leads the reader down a merry path and at the last minute executes a heck of twist that is both logical and completely satisfying.  It's something new and different enough in the zombie genre to overcome the ordinary portions of the book. 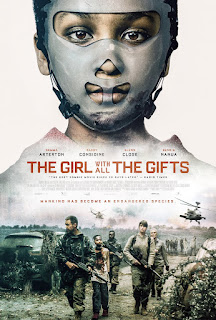 I enjoyed the book so much that I decided to watch the movie!  The movie is a low-ish budget indie style film which is fine.  It hits all the main points of the book except for the ending.  Sadly changing the ending isn't as simple as "and now everyone is happy" or something studios do to make movie palatable for mass consumption.

I'm sure there are plenty of spoilers on the web but I'm not going to do it here.  Simply put, in the book an action is taken based upon certain facts.  In the movie, the facts are changed so when the decision is made the characters motivation is completely changed.  The altruistic decision made for the better of everyone is suddenly twisted into a much more selfish thing.  The ending of the movie left me cold and slightly disgusted because the change was so drastic.  You can see the trailer HERE.

Outside of the ending, the movie was fine.  It wasn't so bad that I can't recommend it but if you have a Sunday afternoon to waste then it's perfect.  In fact, if you haven't read the book it's probably pretty darn good.  But, I can't get past the ending so it was disappointing to me.