Okay, this might fall into the category of TMI (too much information), but I’m going to show you a shocking picture. 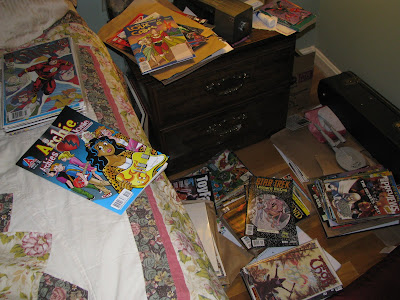 I know. Disgusting isn’t it? That, my dear readers, is my nightstand. Nearly all comic fans have one (I suspect), especially if you like to read something before going to sleep. Whether it’s a comfy chair, a room with indoor plumbing, or your warm bed (or all of the above), we all have our favorite places to read our comics. Usually right before bed is the best time for me, after the dishes are washed, the kids are tucked in bed, and my wife and I have watched a TV show on DVD. (We recently watched the last three episodes of the 1990-91 Flash series and are working on season three of the Incredible Hulk, while we wait for the next Doctor Who disc to be available at the library.) Since, I often get up very early for work, I’m lucky if I get a few pages read before I start to nod off. So, my progress on books is often pretty pathetic – hence, the mess.

Well, actually this blog is partly to blame as well as some of these piles are directly related to recent posts or planned posts for the future. The picture is a bit dark, but on the floor there is the John Byrne Fantastic Four run (around 60 issues). I was trying to find that birthday cake image – it was in issue #271 (I guess no one wanted a no-prize). The zero issue of the Flash (and the pile beneath it) on the bed is just one-fourth of another idea I’m working on. The white backing board (near the Toy Fare) was deliberately turned over to obscure the series title, but it’s related to the anticipated post for next week, which should relate nicely with the special four-part series that Comics And has beginning on Monday.

There are several hard covers scattered about as well (none of which are readily visible). On the nightstand itself is the Spider-man Newspaper strips HC, which I haven’t read in months. Beside the nightstand is both the new and older edition (borrowed from Jim) of Prince Valiant’s first adventures. I’ve been reading that to two of my daughters (along with The Hobbit), but it’s been a few weeks since we had time. There are also two volumes of Robert E. Howard’s Conan stories (1 and 3) that I got earlier this year – both unread. Finally, I’ve got the two Iron Man Omnibuses somewhere down there. Unfortunately, the new sequel didn’t really inspire me to read more Iron Man comics like the first movie did.

Three of the most memorable new comics I read this week can also be seen: Archie #609, Love and Capes #13, and Star Trek: Leonard McCoy, Frontier Doctor #1. My local store offered two free comics (priced $4.99 or less) to subscribers who cleaned out their box this week. So, I went against my IDW floppy ban (because I love their trades so much) and picked up issues one and two of “McCoy” (I really liked it). It was a great promotion – I told the owner that it made up for the disappointing books I got last week (Avengers and Legion of Super-Heroes). Love and Capes should probably get a post on it’s own – it was TERRIFIC! Zahler thinks of everything. Mark (the Crusader) and Abby are vacationing in Hawaii, sunning on the beach, but given his super powers, he really doesn’t tan that much. So, Mark has to fly up directly in front of the sun to get a good dose of UV rays that can actually brown him a bit.

Another reason for some of those “brown-bagged” bundles is my wife’s recent knee surgery. The surgery was supposed to last three hours, so I packed (over-packed more like it – just like I do when I go on vacation) a whole slew of comics to read. However when we got there, they had moved up the surgery time (without telling us), so she was prepped more quickly than we expected. The whole thing was over so fast that I only got an issue and a half read (after the daily Bible reading). I was really looking forward to catching up on my reading that morning!

Lately I spend more time writing about comics (or thinking about what to write) then reading them, so I hope you’ll forgive this “lighter” post, but I’m going to take some time to catch up over the long holiday weekend (on reading and cleaning!)

What does your nightstand look like?
Posted by Matthew at Saturday, May 29, 2010