The Walking (and Flying and Swimming) Dead-ish

Not exactly traversing new ground here, but with the finish of Blackest Night I re-read the 8 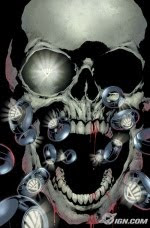 issue series to see what I thought. When the singles were coming out I read them at the same time as the Green Lantern and Green Lantern Corps issues that were also part of the story. This time I wanted to see how the series holds up on its own as a stand alone story.
Truthfully, not so well. It starts out alright with the commemoration of various dead heroes and villains that lays the groundwork for all the dead to return later in the issue. It could use a little tightening on the editing. Though I'd really like to know what a naval cavity is, I think Damage is referring to his nasal cavity. Also, maybe I missed something, but the Freedom Fighters appeared quite alive at the beginning, and the next time I saw them they were dead and fighting the living. Still, it takes off quickly with the dead returning and the fighting starting. The problem is that after that it's all fighting and not much coherent plot. 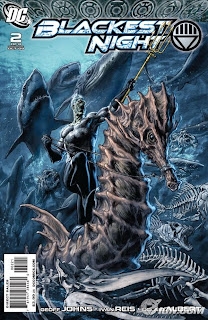 I think the problem is that too much of the plot is in Green Lantern and Green Lantern Corps. Just glancing through Blackest Night again, the first 4 issues feel like ancillary stories. Other than a bit in the first issue or so, there's little Green Lantern, Hal Jordan or otherwise. In fact, it's mostly Barry Allen or Ray Palmer, two more of the vaunted returned heroes who'd given up their mantle, one way or another. They and other Earth bound heroes are just running around, trying not to be killed by the Black Lanterns, but not progressing the story of what's going on in a broader context. Nekron, the force behind all the Blackest Night deus ex machina, doesn't even show up until the end of the fourth issue.
Glaringly, the fifth issue starts with the rainbow corps consisting of one representative from each of the ROYGBIV color rings. How they came to be together was something that occurred in 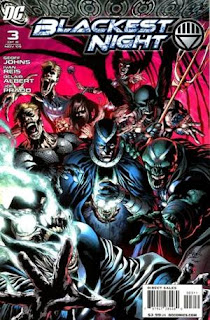 Green Lantern and Green Lantern Corps, so if you're just reading Blackest Night, you have no idea what's going on. That's not a good thing. Similarly, John Stewart shows up with the rest of the Green Lantern Corps midway through the sixth issue, again without any explanation within Blackest Night.
What is a good thing is the direct confrontation with Nekron that begins at that point. I also liked the Black Rings taking over all the heroes who had been dead but were now alive, except Hal Jordan and Barry Allen. One might think that's Geoff Johns playing favorites with the two characters he's particularly guiding these days, but at least it's consistent with the story.
Then there's the somewhat controversial aspect where each color ring replicated itself from its primary standard bearer's ring and sought out another representative to double the forces of the rainbow. Some have complained about the Atom being the representative of Compassion due to his activities in the JLA, but within this story it appears consistent with how he's been represented. What I 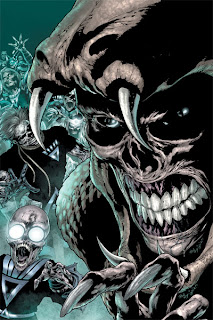 find more troubling, plot wise, is that Wonder Woman, who's one of the Black Ring wielders at this point, is retrieved from those ranks by a Violet Ring of Love. That seems like a glaring problem for the plot. If one of the other color rings is on the finger of one of the dead or formerly dead and severs the connection of the Black Ring, why not replicate as many rings as necessary to take out all the dead and formerly dead with other color rings? The same thing happens later when Black Lantern Superman is severed from the Black Ring connection by the White Ring, but that I can justify to myself because the White Ring is supposed to be different from the colored rings.

That a Guardian becomes a Green Lantern is also more than a little flimsy in logic. First off, the Guardians are powerful enough to handle a Green Lantern without a ring, so there seems little need for one to wield a ring on top of that. Second, there are already 4 Earth originating Green Lanterns and a plethora of others from other planets running around at this point. What's the need for a Guardian to be one too? If none of the other Green Lanterns were near enough, why not have the ring seek out a new wearer al 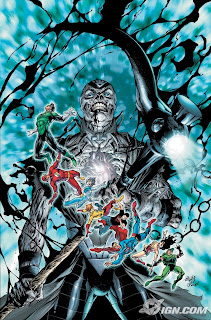 together, thus having 2 Green Lanterns and a Guardian representing Will? Not nearly as much of a problem as the Violet Ring severing the ties of the Black Ring to Wonder Woman, but still less than ideal plotting.
I can't say as I get the resolution, either. The white light force hidden on Earth is brought out. Sinestro has it inhabit him, which doesn't work out when he tries to kill Nekron. An all white light corps shows up, composed of Hal Jordan, Superman, Wonder Woman and some others, but I don't know what the point is there. They're no more effective than the white light Sinestro at fighting Nekron directly. Nekron's not defeated until his connection with Black Hand, his tether to this universe, is severed. Oh, and the Anti-Monitor was the power source of the Black Lantern and ends up back alive in the end, though banished back to his universe. That alone is highly disappointing in this story. It's like we're full circle back to the pre-Crisis on Infinite Earths DCU. We'd already gone that route with the recreation of 52 parallel universes and a baffling number of origins and re-boots to various characters, all attempted to maintain a coherent continuity, but the revival of the Anti-Monitor just seems to put the nail in the coffin.
Of more chatter that I've seen is the revival of a few of the dead, who are now at 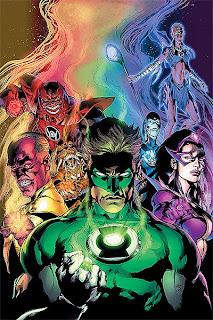 the center of Brightest Day, I guess. I'm not reading that, so I only know what I get second and third hand. With the little bit that's presented at the end of Blackest Night, the Hawks as a loving couple seems to be yet another reversal of the DCU to its pre-Crisis status. The only thing new and interesting out of these revivals, in this limited first glance, is a living Boston Brand, no longer Deadman.
Like a lot of these event stories, there's so much going on and so many characters involved, even with a re-reading I lose track of what's going on with who. And in this case, the visual isn't helping. Not Ivan Reiss's pencils. Those are excellent. No, my problem is with the way the Black Lanterns are depicted. There's some hint of the dead person's original costume or hairstyle, but mostly they all look like zombies clad in black. Not being a total DC drone or anything, I don't know who a large number of these Black Lanterns are unless a name is mentioned, which isn't often. The Black Lanterns are just one mass of confusion to me most of the time.
At the heart of the m 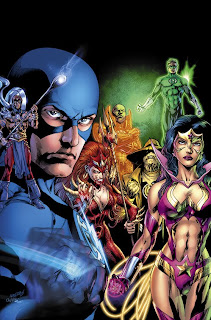 atter this is no story for anyone who just wants to pick up and read a good story. It's a fan's reading material, and the deeper into fandom the better for understanding. That alone makes it a failure to me, sales or no. I had skipped the weekly issues of 52 but read the story in trades. I could understand what was going on there without reading any tangential titles. In fact, 52 was almost entirely free of ties to other books, which is what any limited series should be, in my opinion. Crossovers amongst ongoing titles I can live with, but a limited series should be a self contained story. This isn't. Worse yet, even a crossover wouldn't have helped the casual reader. There's no way someone who hasn't been reading DC comics for years would have any idea who the Anti-Monitor is. Considering that he's the power source for the Black Lantern, that's a pretty major piece of information that's missing.
I'm not going to complain, as some others have, about the emotional spectrum that the colored rings are supposed to reprsent. Yeah, will is not an emotion, but it's close enough in the world of comic book super hero logic. Perhaps if Johns had reached back to the early days of the Hal Jordan Green Lantern when the wielder of the ring was chosen for fearlessness, it would have fit a little better, particularly if it's described as bravery. Whatever. Not that big of a deal. 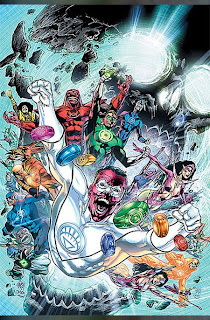 In reading this entire blockbuster story, the only time I was moved was when Gen, Jason Rusch Firestorm's other half, as well as his girlfriend, was killed by Black Lantern Firestorm Ronny Raymond. Rusch's impotence in saving Gen, as well as the gruesome method of demise, really had me feeling for both Rusch and Gen. The rest of it feels like the usual superhero stuff that has no lasting consequence. Ironically, I'd now like to read more stories of the Gen and Jason Firestorm. Seems like there would have been a lot of good story potential there. How do they deal with the intimacy issues? That alone has years of storytelling potential. The only hope that I have out of it is that I strongly doubt she'll stay dead. I certainly hope no one believes the proposition that this story represents the end of reviving the dead in the DCU. If so, I have a bridge I'd like to sell you.
In the end, I'm back on the side of not buying single issues of event stories. It's just not worth it. If there's something there worth my time, it'll soon be a trade and I'll get it that way.
Posted by Thomm at Sunday, May 23, 2010