Jim: I’m happy to say that I’m not ordering a single hard cover from DC this month. I’m trying to slow down that side of my collection and actually read more of my hard covers. Also I was trying to stop getting Action Figures and was going to finish out with the Blackest Night series and they have two sets in this month solicitations – ouch!
Lee: You may be happy but all it means is that Gwen gets shorted a book, or two, or three!
Gwen: I have plenty to read, believe me. 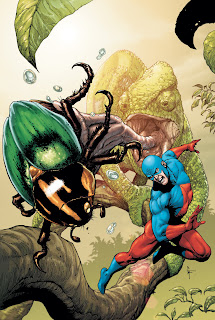 BRIGHTEST DAY: THE ATOM SPECIAL #1
On sale JULY 7
32 pg, FC, $2.99 US
Written by JEFF LEMIRE
Art by MAHMUD ASRAR & WALDEN WONG
Cover by GARY FRANK
Discover all-new allies, enemies and adventure as The Atom leaps from the pages of BRIGHTEST DAY into this one-shot special! Rising stars Jeff Lemire (SWEET TOOTH) and Mahmud Asrar (Avengers: The Initiative) update the Atom’s origin and kick off the tiny titan’s next major story, which continues this month in ADVENTURE COMICS #516 (see page 87). If you thought you knew Ray Palmer, then think again! The smallest hero in the DCU is about to become one of its biggest, and the excitement starts right here!

Jim: I like seeing Lemire doing super hero work, but why do we have to go to the Silver Age Atom, Ray Palmer’s story has been told a thousand times by now. I wonder if Jeff will do a little retro-con and make Ray a hockey player?
Lee: I like Lemire’s writing but I’ve never liked the Atom as a character. Somehow being small just seemed dumb to me. I’ll wait until you tell me it’s great.
Gwen: Eh, it's hard to get excited about this. Ray Palmer is old news and the Atom has never been the strongest stand alone character. 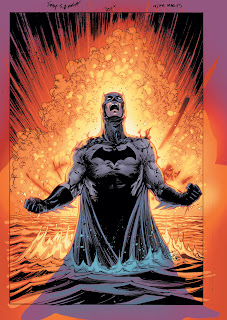 BATMAN #701
On sale JULY 14
32 pg, FC, $2.99 US
Written by GRANT MORRISON
Art and cover by TONY DANIEL
Grant Morrison and Tony Daniel re-team to tell the exciting 2-part, untold tale of Bruce Wayne and his adventures between BATMAN R.I.P. and FINAL CRISIS! What happened to Batman – and Dr. Hurt, for that matter – after the devastating events at the climax of R.I.P.? And what secrets within this story point toward THE RETURN OF BRUCE WAYNE?

Jim: Man Grant is everywhere with this return story. He has had it in the regular Batman and Robin series, now this book and has a six issue mini-series telling the story. I’m very curious to see where this is going. If it is all just to make Bruce Batman again I will be disappointed.
Lee: I just wonder if he left this out of Infinite Crisis so that more books could be sold later.
Gwen: So not excited by this. Although Grant Morrison has done well with the B&R stuff. 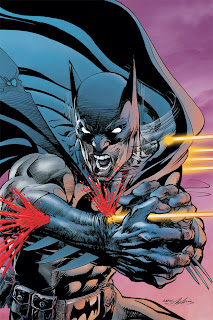 BATMAN: ODYSSEY #1
On sale JULY 7
1 of 6
40 pg, FC, $3.99 US
Written by NEAL ADAMS
Art and cover by NEAL ADAMS
1:25 sketch variant cover by NEAL ADAMS
Legendary Batman artist and comics pioneer Neal Adams returns to Gotham City with the first issue of two 6-part miniseries!
In this electrifying new story, The Dark Knight faces a series of seemingly unrelated challenges as villains and allies old and new push him to his limits like never before. After Batman discovers a dark and mysterious matrix being superimposed over his life, what sort of life-changing voyage must he embark on to escape from this powerful and insidious force? Be here to find out as Adams writes and illustrates his next masterpiece Batman tale!

Jim: Now you would think this would be an automatic buy for me as I love Batman and Neal Adams back drawing Batman again, but a part of me says to wait three years and just buy the absolute, but I will not be able to wait. It is curious to see creators come back to a character, sometimes it works and sometimes it doesn’t.
Lee: I just want to know what the heck is up with the cover. Blood spurting from his arm???? Since when does Batman get shot?
Gwen: Actually I was more concerned with the fact that Batman looks undead. Perhaps the coloring is more clear in full size? 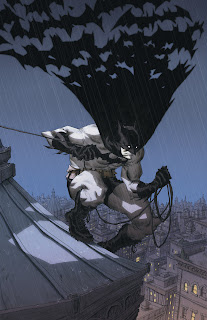 DETECTIVE COMICS #867
On sale JULY 28
40 pg, FC, $3.99 US
Written by DAVID HINE
Art by SCOTT MCDANIEL and ANDY OWENS
Cover by PETER NGUYEN
The four-part epic “BATMAN: IMPOSTERS” begins with this thirty-page adventure!
A call to arms has gone out through Gotham City, and normal, everyday citizens are being drafted into a bizarre battle. Will they side with vigilante justice or join the cause of chaos and anarchy? Only The Dark Knight can rein in the terror created by the villain known only as The Imposter. But what is The Imposter’s true motivation for this gang war — and what’s hiding behind his rictus grin? Be here to find out!

Jim: My favorite part of this solicitation is seeing David Hine’s name in the credits. He was doing some great work at Marvel and has been playing in the DCU sandbox for a little while with a Brave and Bold story and a Arkham Asylum mini-series. Hine is a quality writer and I hope he remains in the DCU. Also he is taking over Azrael this month.
Lee: It appears that DC is putting all the big guns back on Batman books. Maybe this will be a mini Golden Age for Bats again.
Gwen: Huh, for once a solicitation has served its purpose in making my both curious and interested in a storyline. Good job solicitors! 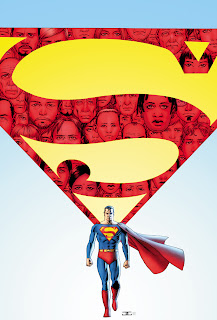 SUPERMAN #701
On sale JULY 14
32 pg, FC $2.99 US
Written by J. MICHAEL STRACZYNSKI
Art by EDDY BARROWS & J.P. MAYER
Cover by JOHN CASSADAY
1:25 “DC 75th Anniversary” variant cover by JOHN CASSADAY
J. Michael Straczynski begins his highly anticipated run on SUPERMAN! After the devastating events of WAR OF THE SUPERMEN, how can Superman possibly continue his battle for Truth, Justice and the American Way? Find out here in “Grounded” part 1 and get in on the starting line of a modern-classic SUPERMAN story!

Jim: JMS usually comes in with some great ideas, I just hope he know where he is going and brings back Clark Kent. It has been heavily rumored that he wants control of Superman so Action Comics will be about Lex Luthor.
Lee: I don’t care who writes it, I just want it to be good. The last Superman arc has been toooooo long.
Gwen: I too want Clark Kent back although the Kryptonian stuff did a good job establishing that Superman is still Superman regardless of his powers. 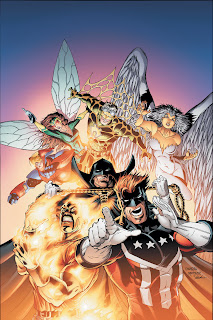 THE MIGHTY CRUSADERS #1
On sale JULY 14
32 pg, FC, $2.99 US
Written by ERIC TRAUTMANN & BRANDON JERWA
Art by JULIAN LOPEZ & JOHN LUCAS
Cover by STANLEY “ARTGERM” LAU
1:10 Variant cover by IAN CHURCHILL
Fellow Americans, we are pleased to introduce you to your official government superhero team – the Mighty Crusaders! The Red Circle has closed, and the mystery around it has grown into a full-blown conspiracy that The Shield, The Web, The Comet, Inferno, Fly-Girl and War Eagle must publicly investigate. But first, the team faces great loss and great obstacles, even when it comes to dealing with each other!
Written by Eric Trautmann (ACTION COMICS, THE SHIELD) and Brandon Jerwa (INFERNO, THE FOX) and drawn by Julian Lopez (SUPERMAN, ADVENTURE COMICS), this new monthly series brings together the Red Circle heroes to investigate a massive mystery in the DC Universe and features action, intrigue and giant robots. You dare not miss it!

Jim: So they canceled The Shield and The Web and have launched this book. At least one series about the Red Circle characters makes more sense they trying two solo series at a $4 price point.
Lee: It appears to me that DC doesn’t have a clue what to do with these characters. The market couldn’t support multiple books so DC releases one with ties to nothing. I hate to nay-say but this won’t last a year.
Gwen: I have yet to form any real attachment for these characters. But still, they might do better in a group setting. 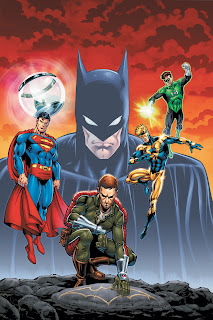 TIME MASTERS: VANISHING POINT #1
On sale JULY 21
1 of 6
32 pg, FC, $2.99 US
Written by DAN JURGENS
Art and cover by DAN JURGENS & NORM RAPMUND
1:10 Variant cover by CHRIS SPROUSE & KARL STORY
“The Search for Batman” starts here! Vanishing Point – where time ends – is tearing itself apart, and one of the keys to keeping reality from being torn asunder is finding exactly where Bruce Wayne is in the time stream! Rip Hunter puts together a high-powered band of Time Masters to travel throughout history in search of the World’s Greatest Detective, but can even the combined might and skill of Superman, Green Lantern and Booster Gold help the Time Master pinpoint where Batman went at the end of FINAL CRISIS?
DCU fans won’t want to miss this 6-issue companion series to the highly anticipated BATMAN: THE RETURN OF BRUCE WAYNE!

Jim: I do not believe this is a real companion piece to the return of Batman. Morrison knows what he is doing and someone came up with this idea as another storyline of people looking for Batman. No way are the two series intertwined.
Lee: Good grief, how many Batman related books are there this month. And how many different series are we going to get about where Batman went???
Gwen: Is Superman a character in this because of all his time traveling experience? Does that mean time travel will look like a rainbow? 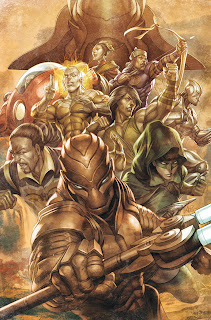 THE GREAT TEN #9
FINAL ISSUE
On sale JULY 7
9 of 9
32 pg, FC, $2.99 US
Written by TONY BEDARD
Art by SCOTT MCDANIEL & ANDY OWENS Cover by STANLEY “ARTGERM” LAU
The tragic history of the Mother of Champions is revealed in the final issue as she confronts the Socialist Red Guardsman about his connection to the alien threat to China. But when the aliens attack, it’ll be up to the super-functionaries of The Great Ten to put aside their differences and band together to save their homeland – or die trying!

Jim: I was enjoying this series, but was it selling so bad that they had to cut the series to nine issues from the planned 10? Yikes the sales must have been way down the charts. Truth be known why I have enjoyed it I could see this had no mass appeal.
Lee: I’ve heard good things about the series, and not just from you. Too bad it’s being canceled. The other downside of this move is I won’t get the trade now. I have doubts about any writers ability to wrap a huge storyline up cleanly cutting an issue out this late in the game.
Gwen: The Great Ten does seem like it should have 10 issues. I mean, really, how much would one more issue cost in the grand scheme of things?