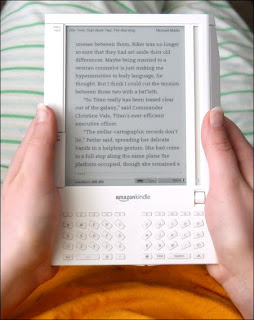 We've gone on about the future of comic books on this blog quite a bit. I've given a lot of thought to the future of books in general and with technology like the Kindle, the Nook and broader devices like the ipad I wonder how the future of the written word will progress. Despite my love of reading I was somewhat resistant to the idea of digital readers as I really love having an actual book in my hands. I enjoy the whole experience of reading. Turning the pages, even the smell of books (yes, I'm aware I'm a weirdo). So the idea of the Kindle, when I first was exposed to it, didn't appeal to me all that much - but now? I love it.


So how did I go from being wary of an e-reader to practically sleeping with my Kindle under my pillow? Honestly it started with my cell phone breaking. At one of my soccer games some bug spray broke in my soccer bag and destroyed my phone so not only did I have to get a new one but I also had to get a new plan asmy contract was almost up anyway. Jim offered to help me get into AT&T and even ended up getting my an iphone for Christmas. Having an iphone is like having superpowers it does so many cool things - but one of the reasons I wanted one was to try out the Kindle app. After just a week with a tiny (an annoyingly bright) kindle screen I was hooked - but I hated that the screen glowed. It would give me a headache if I read too long and I started dreaming about getting an actual Kindle - but it was way too expensive for me. Luckily my little sister (regardless of the fact that I told her we were on a budget for the holidays thatnks to saving up for my upcoming wedding) and her husband got Andre and I one gift - a Kindle. Of course, poor Andre hasn't been able to use it at all since we got it.


The Kindle it one of the coolest toys I've ever gotten.


1. The Kindle instantly sends books to me. I don't have to go to the bookstore (the nearest one is 20 minutes away as bookstores have been slowly closing down). Instead I just go onto Amazon and can read any book as soon as it'sbeen released. I can preorder books and have them show up on my Kindle the moment they're hitting the shelves. I read very rapidly and the idea that if I get a new series book and like it that I can have the next book in my hands as soon I finish the one I've initially picked up - it's fantastic.


2. You can get most classics (including A Princess of Mars) for free on the Kindle. This has been a great way of clearing my shelves. I haonestly have way too many books around my house. I was drowning in books and even though I re-read almost everything in my collection I sometimes have a hard time finding my books. I've managed to give away three boxes of books since getting my Kindle. Don't get me wrong - there are a lot of books I'm keeping and want to have in their paper format - but there are plently I can enjoy just as well without them taking up space in my house.


3. I can keep tons of books on the slim and light Kindle. Which means the fact that I can read an average novel within a few hours doesn't mean I have to bring a heavy bag of books with me on my extremely long upcoming trip to Europe. I can just have them on my Kindle - not to mention it hold a charge for something near a month - so I don't even need to worry about it losing power.


4. The inkscreen is excellent - little to no glare and no headache inducing glow to the screen. Also, my Kindle is only a little larger (thin obviously) than an average paperback - so it;s easily transportable.


Of course there are some things I'm not fond of. Like the price of some books. I can only hope the money goes to the writers but I doubt it - while there are cheaper books for the Kindle I feel like there should be a price cut for all books - as obviously the digital book avoids the cost of paper, ink and distribution - so there is no reason a Kindle book should ever cost the same as a paper book.

Also, it's a bit harder to tell where I am in a book as it's much slower to "flip through". Even so, this is easy enough to adapt to.

Manga and black and white comics are great on the Kindle but of course the lack of color doesn't work as well for most comics. I'm sure their will be later versions of digital readers that have both a glare free screen and color.


Either way, I love my Kindle - but where does this leave the business of books? How much will be lost as more and more people discover the joys of digital books? Border has already declared bankruptcy and there are more and more bookstores disappearing evry day. I can only think that comics may not be far behind as the paper comics are already highly priced and there are so many good online comics that are offered for free - with their creators surviving off of donations and their online stores. I'm sure the book business will adapt but as with any major change things always get lost along the way even as we gain the new.
Posted by Gwen at Tuesday, March 29, 2011