Indies Preview Review for May Part 3 of 3 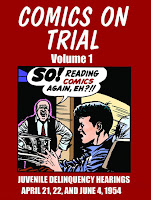 Pure Imagination Publishing
Comics on Trial Vol. 01 SC by (W/A) Various
Discover the dark chapter in comics' history when Congress held a series of hearings that explored whether or not comic books contributed to juvenille delinquency. Testimony from Walt Kelly, Milton Caniff, William Gaines, and Frederic Wertham given in April and June of 1954 is included. These are the hearings that almost killed the comics industry and lead to the creation of the Comics Code Authority. A must-have for historians and fans alike. $25.00
Lee: Ahh, the comic book cliff notes on one of the biggest events of comic book history. I love it!
Gwen: Oh the many things that contribute to juvenile delinquency - comics, D&D, magic cards - I'm amazed I wasn't locked up in juvie for most of my childhood. The real irony of these trial being, for me, the fact that comics actually taught me a lot about being a good person - not the other way around.

Secret Acres
I Will Bite You and Other Stories GN by (W/A) Joseph Lambert
I Will Bite You! includes the Best American Comics selection, 'Turtle Keep it Steady,' plus several new stories. Juxtaposing an economy of line with sophisticated, unusual narratives, this is the long-awaited debut of an artist many are watching with interest. 128 pgs. $14.00. Visit Joe here.
Lee: Lambert linework is really interesting, and his stories seem to have plenty of indie appeal to them. This is certainly a book worth taking a look at.
Gwen: I really like the title "I Will Bite You". While it's true that you shouldn't judge a book by its cover having a title or a cover that makes me take a second look does tend to influence some of my reading decisions.

Shh Productions
DPD Doktormentor: Jail Babe Surgeon #2 by (W/A) Peter Pants
This all-real-photo comic story features girls gone bad and crazy B-Movie style adventure as the mystery of Doktormentor unfolds with more thrills, chills, and ta-tas. Who has been informing police of the mad doctor's experiments on the female inmates of Lake Erie's infamous women's prison? The young policewoman closes in on the doctor as more inmate clothes come off! And who's side is the ultra-sexy Nurse Nawdy on and is her uniform next to come off? It's 'Prison Girls Gone Wild' with lots of topless action and sexy humor! #2 of 3, $9.95
Lee: I think the cover blurb “Will this bi-sexual nurse die a virgin?” tells me everything I need to know about this… this… ABSOLUTELY EXCELLENT book. This is to balance out all the girly books I picked earlier.
Gwen: I can't stop laughing. I mean, I'd never buy this book, but it's like the entertainment I get out of reading the tabloid covers while in line at the grocery store.

Top Shelf Productions
Homeland Directive GN by (W) Robert Venditti (A) Mike Huddleston
Dr. Laura Regan is one of the world's foremost authorities on viral and bacteriological study. Having dedicated her career to halting the spread of infectious disease, she has always considered herself one of the good guys. But when her research partner is murdered and Laura is blamed for the crime, she finds herself at the heart of a vast and deadly conspiracy. Laura must evade law enforcement, mercenaries, and a team of cyber-detectives who know more about her life than she does - all while trying to expose a sinister plot that will impact the lives of every American. $14.95
Lee: Let’s start with the caliber of the creators, Vendetti wrote ‘The Surrogates,’ forgetting the bad movie, was an excellent comic. Mike Huddleston is a fantastic artist who has worked on many great books including my favourite, ‘The Coffin.’ This is another quality book from Top Shelf.
Gwen: I heard the Surrogates movie was decent. Either way I am interested by the premise for this book - it actually sounds like a cool idea for a TV show. 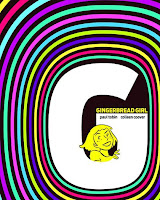 Gingerbread Girl HC by (W) Paul Tobin (A) Colleen Coover
There are plenty of established facts concerning 26-year-old Annah Billips. She likes sushi and mountains, but hates paper cuts and beer breath. She dates girls and boys, and loves to travel. She may have a missing sister, or she might be insane. Did Annah invent an imaginary sister named Ginger during her parents' ferocious divorce, or did her mad scientist father extract part of her brain and transform it into a living twin? Boyfriends, girlfriends, magicians, pigeons, bulldogs, and convenience store clerks follow Annah through a night in her life in an attempt to determine that one last fact about Annah - and the Gingerbread Girl. $12.95 Visit Colleen Coover here. Read the opening sequence here.
Lee: And another stellar offering from Top Shelf, husband and wife team Tobin and Coover are established creators who continually generate outstanding work. Without a doubt, this will be good! The book is being released as a webcomic too, so check out the links.
Gwen: The descriptions here really pull me in. It sounds like a book that will have a lot of underlying meaning inter dispersed with light hearted and wacky encounters. Very cool. 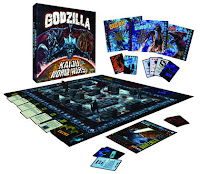 Toy Vault Inc.
Godzilla: Kaiju Wars Board Game
It's an all-out brawl of monstrous proportions, and Earth is the battlefield! The Xiliens have pitted Godzilla, Rodan, Gigan and King Ghidorah against each other in a catastrophic battle, and only one monster will emerge victorious! In Godzilla: Kaiju World Wars, players pick a monster and a scenario, stomping over terrain and destroying buildings on their warpath - all while fending off aggressive military attacks, bombs, traps and, of course, other kaiju! Special abilities are used to eliminate the competition or force them to tuck their tail between their legs and run away before they are taken out. The game is jam-packed with pieces sure to please any gamer, with the four fully painted 2 3/8 plastic Kaiju figurines, 90 stackable plastic tiles for building skyscrapers, four individual monster playmats, 86 terrain and power tokens, and much more. You've never had so much fun ravaging the world as you will when you play Godzilla: Kaiju World Wars! $69.99
Lee: If I thought I could sneak this into my house unnoticed it would be there tomorrow! But there is no way Wife is going to believe this “just” showed up. Sigh, this looks sooooo awesome in a giant monster crushing buildings sort of way my inner little boy is dying to play this. Actually, my inner little boy is dying to play this with my own son and crush him silly! And I wonder why Wife won’t play games with me?
Gwen: Come on Lee, just use the excuse you bought it for your son! Not that I wouldn't be into playing this, how awesome. Sadly, while Andre would probably also enjoy this $70 is a bit too high of a price ticket for a board game. I don't even spend that much on video games. Excellent idea though. 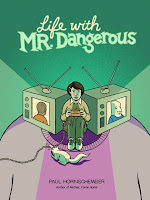 Villard Books
Life with Mister Dangerous GN by (W/A) Paul Hornschemier
From rising star Paul Hornschemeir comes a touching, often funny, always heartfelt graphic novel about a twentysomething girl trying to put her life into order. Although Amy struggles to define a life outside of the example her mother provides for her, her past and present romantic life are a mess and the only person she truly cares about lives half the country away in San Francisco. As a result, she finds herself spending too much time watching a cartoon, Mr. Dangerous. And lately, it seems that Mr. Dangerous has been trying to talk to her through the television! 160 pgs. $22.00 Read Hornschemier blog here.
Lee: Hornschemier is a talented artist and writer, so a new collection of his material is something to look forward too. I’m not sure he’s a rising star since I’ve been reading his material for years now. I would describe his work as quirky, slightly depressing, but always entertaining.
Gwen: Ahh, when you know you're watching too much TV - when it starts talking back. Regardless I'm sure this will be a well done book, solid art as well. 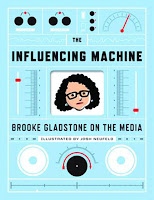 WW Norton
Influencing Machine HC by (W) Brooke Gladstone (A) Josh Neufeld
Nearly 1 million weekly listeners trust NPR's Brooke Gladstone to guide them through the distortions and complexities of the modern media. This is a visionary and opinionated work of graphic nonfiction on the media and it discontent. 192 pgs. $23.95 Visit Josh here.
Lee: This pick is for Jim & Thomm! Everyday, behind the scenes, I have to deal with those two. It’s like getting Foxnews and Huff Post sent directly to my inbox with some additional, completely unnecessary innuendo and swearing. But, other than that, I love reading about media distortion so I’m sold.
Gwen: This isn't really a topic I'm all that interested in reading about. I hear enough about it as it is.

Yen Press
Beauty and Squat Bears HC by (W/A) Emile Bravo
Beloved fairytale worlds collide in this adventure for kids and parents. When stepmother's magic mirror declares that Snow White is the fairest in the land, Snow flees the kingdom and finds herself at the doorstep of the seven squat bears' cabin! But the squat bears aren't interested in harboring fugitive princesses. The best place for a beautiful princess is with a prince! Setting off to find a prince, the squat bears quickly learn that the lives of royalty are far more trying than they seem! 48 pages, $14.99
Lee: This is a little thin for the price but Emile Bravo is another fantastic creator! I have a copy of his Eisner nominated book My Mommy Is in America and She Met Buffalo Bill, and I loved it. Even though it’s thin, I have no doubts this will be fantastic and I can’t wait to get a copy.
Gwen: Interesting but I'm not sure I'm sold on this version of Snow White. Even so, the squat bears are pretty adorable.

Lee: What a great month! There is so much out there from established creators that there is very little that will disappoint. My budget is crushed again.
Gwen: Indies are so much fun. There's such a variety to choose from and it's such a refreshing change from mainstream comics.
Posted by Lee at Friday, March 25, 2011