Marvel Preview Review for May Part 1 of 2

Greg: Lee gave up on picking single issues this month, so I stepped in. Shall we see a ray of sunshine in our Marvel previews?! KEEP READING TRUE BELIEVERS!
Lee: Marvel, in a truly bizarre move, printed quote-normal-unquote covers this month. No extreme blood, no extreme boobs. No nothing for me to complain about so it was better than Greg pick.

FEAR ITSELF: YOUTH IN REVOLT #1 (of 6)
Written by Sean Mckeever
Penciled by Mike Norton Cover by Guiseppe Camuncoli
With a growing sense of uncertainty and despair gripping the nation--and the world--the remnants of the Initiative program are sworn in as federal agents charged with keeping the peace. Their ensuing actions, however, threaten to plunge America's young heroes into civil war! Featuring Avengers: The Initiative stars Thor Girl, Ultragirl, Cloud 9, Komdo and Hardball--plus Firestar, Gravity and some very cool surprises--Youth In Revolt brings the horror of Fear Itself to the doorstep of a generation!
Greg: Young Allies and the castoffs of the Initiative get a Fear Itself miniseries here. Sean McKeever has probably been the most successful teen superhero writer of this generation and his work goes criminally unappreciated. Here’s hoping this mini gets him some much needed attention.
Lee: I agree. Mckeever was writing some great stuff before going to DC where they tried to kill his career. Marvel loves Sean and so do we. 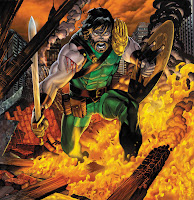 HERC #3
Written by Greg Pak & Fred Van Lente
Pencils by Neil Edwards Cover by Chris Stevens
X-Men Evolutions Variant by John Tyler Christopher
Fear Itself has made its way to Hercules’ home turf! Stripped of his powers, Herc must change everything he knows about being a hero to win the day. But against an army of monsters and super villains, what chance does a mere mortal have? Find out when Herc shows the world the true measure of a superhero in Herc #3! 32 PGS./ $2.99
Greg: Incredible Hercules was amazing and I’m glad that Marvel has found a way to keep Pak & Van Lente with the character. Worth a pick up, especially for $2.99.
Lee: I've been reading this on and off for the last year or so and I am still not sure I understand the appeal. It's good, even above average, but that's about it. Solid and entertaining but not mind blowing.

THE STAND: NO MAN'S LAND #5 (of 5)
Written by Roberto Aguirre-Sacasa
Penciled by Mike Perkins Cover by Tomm Coker
After the horrific fruition of Harold and Nadine's plans last issue, everything in the Free Zone hangs in the balance. Newly returned from the wilderness, Mother Abagail clings to life, just barely, prompting city-wide fear and unrest. Meanwhile, the surviving members of the Committee keep vigil by her bedside, unprepared for her latest revelation: That the time has come for the forces of good to make a stand against Flagg's armies of darkness in the west... The stage is set, True Believers, the die is cast, and it's time to choose sides, as this shattering arc concludes! 32 PGS./ $3.99
Greg: Hey, remember when Marvel started publishing all of Steven King’s adaptations and it was a huge blockbuster ? Is this still busting blocks, cause that’s an impressive creative team on a book I don’t know anyone’s reading.
Lee: This is the same as the Oz books, and other classics that Marvel publishes. This isn’t for the DM, this is for the bookstores. I don’t know how good this is because, while I liked The Stand, I didn’t like it enough to read it in comic book form.

ULTIMATE COMICS SPIDER-MAN #158
Written by Brian Michael BendisPencils & Cover by Mark Bagley
Variant Cover by Steve Mcniven
Will Spider-Man Survive? The Sinister Six are determined to bury Spider-Man for good, and if Spider-Man can’t find Aunt May or Mary Jane, they could be going with him. “Death of Spider-Man” continues, and the real question is, will ANYONE survive? 32 PGS./ $3.99
Greg: "Will ANYONE survive?" I think the answer is a probably. I look forward to Jim’s editorial about this in a few months.
Lee: Now that is just plain nay-saying before the event. 20 yrs ago, a blurb like this might have meant something but not these days. Now it just smacks of exhausted editor who didn't care enough to really plug the book. The death references aren't a significant hook, so you either are already buying the book or you aren't.

NEW AVENGERS #12
Written by Brian Michael Bendis
Penciled by Mike Deodato & Howard Chaykin
Cover by Mike Deodato X-Men Evolutions Variant by Khoi Pham
Secrets!! Who were the first Avengers? That is the question and this chapter will bring you the shocking answer. And how will the first mission of the earliest Avengers affect the survival of one of the most beloved Avengers of the modern day? The Dark Avengers team of Bendis and Deodato reunite and bring comics legend Howard Chaykin with them! 40 PGS./ $3.99
Greg: There is alot of chest hair on that cover. I mean alot. If only Magnum P.I. could join those Avengers, it would be complete.
Lee: Sadly, Marvel skipped the blood and boobs in favor of chest hair. I got nothing... on that topic. BUT, I do want to b tch about the X-men Evolutions covers! What a seriously F'ed up idea. Let's put a cover on a comic book that has NOTHING to do with the interior of the book.

I can see it now, new reader comes into store and picks up X-men comic because he/she liked the movie. Then they find out the book is actually Avengers? I feel bad for store owners because they are going to have to make sure people get what they are paying for.

VENOM #3
Written by Rick Remender
Pencils by Tony Moore
Cover by Mike Deodato
Flash has lost control of the symbiote! Jack-O'-Lantern and his enigmatic boss are poised to flood the black market with weaponized Antarctic Vibranium! With his military handler’s finger on the self-destruct button, can Flash overcome his temper to regain control over Venom and save the world from descending into chaos before he’s blown to pieces? 32 PGS./ $2.99
Greg: You know, in theory, Venom with a gun doesn’t really excite me and just sounds like a hangover from the 90’s. In actuality, ITS VENOM WITH A GUN d00dz !!!!!!!!!
Lee: Here's the rule of thumb, if, when you say it out loud it sounds dumb, then it is dumb. So, let's try it right now... here goes... sitting in my living room saying "Venom with a gun doodz"....

What just happened? My wife came over and took my beer away. What the heck is up with that? Although, Boy did perk his ears up when I said it....

SPIDEY SUNDAY SPECTACULAR! #1
Written by Stan Lee
Pencils & Cover by Marcos Martin
The legendary Stan “The Man” Lee and artist extraordinaire Marcos Martin bring the real world into Spidey’s world in this collection of their two-page Spidey Sunday strips, straight from the pages of Amazing Spider-Man! Get ready for a heaping helping of fourth-wall-breaking, web-swinging wonder in the Mighty Marvel Manner! 40 PGS./ $3.99
Greg: This is a surprisingly cute story from Stan Lee, but the art is the attraction here. Marcos Martin is a better Spider-Man artist than anyone whose last name isn’t Romita or Ditko. This is worth the price of admission for his art alone.
Lee: SOLD! I loves me some new art so I will check it out.

HULK #33
Written by Jeff Parker
Pencils and Cover by Gabriel Hardman
X-Men Evolutions Variant by Greg Tocchini
Two nightmarish new villains attack Red Hulk at his most vulnerable! After sleepless weeks on edge, Red Hulk is losing it fast. Perfect timing for enemies mounting separate attacks—and the deadliest comes from a dark horror restored to the world, known as Black Fog. Deadliest until the world-ender called The Omegex arrives! The book CBR says “continues to impress…” 32 PGS./ $2.99
Greg: I know its tempting to avoid this book cause, well, Red Hulk was written by Jeph Loeb for however many years, but you’re doing yourself a disservice. Under Jeff Parker and Gabriel Hardman, its become one of the most fun books on the stands. If you want to see a dude punching gigantic monsters in the face, this is your book.
Lee: It was a dude punching giant monsters in the face when Loeb wrote it! And it had better art then too. I know I am in the minority but I liked Loeb's run for the giant punching and hitting. Parker has introduced characterization into the book and it makes it painful for me.

MOON KNIGHT #1
Written by Brian Michael Bendis
Pencils & Cover by Alex Maleev
The wait is over! Moon Knight is here...like you ' ve never seen him before! And we mean Never! The Eisner award-winning team of Bendis and Maleev tear into the mythos of Moon Knight with the same verve and derring-do they brought to Daredevil. A Marvelous reinterpretation of one of the most enigmatic characters in Marvel history starts right here! 48 PGS./ $3.99
Greg: Its Bendis and Maleev. Its worth at least a look.
Lee: I don't know. Scarlett was from Bendis/Maleev and that was... divisive.. is probably the best word. Bendis excels at books with single characters but I'm not sold on his take on insanity. And, Moon Knight is all about the insanity.

POWER MAN AND IRON FIST #5 (of 5)
Written by Fred Van Lente Penciled by Wellinton Alves
Cover by Mike Perkins
Who Killed Crime-Buster? Power Man and Iron Fist, our non-profit private eyes have figured it out, but they have to fight their through every homicidal maniac in Seagate Prison to prove it! Plus: Noir's true identity! The fate of Vic Alvarez's girlfriend! The Divine Right! Commedia Dell'Morte! Dogs and cats living together! Van Lente and Alves bring you the senses shattering conclusion! 32 PGS./Rated A …$2.99
Greg: The first issue of this opened with a sombrero wearing villian declaring that he wanted to keel jour face. If you haven’t been buying this, then you’re missing one of the best things Marvel’s putting out.
Lee: Sadly, I agree. This is one of the rare mini series that no one should like, but everyone loves. It's worth your time and money.

X-MEN #11
Written by Victor Gischler
Penciled by TBA Cover by David Yardin
X-Men Evolutions Variant by David Lopez
Jubilee has been turned by the dark forces of the undead. And though the battle with the vampires is over, Jubilee’s own battle has just begun. Now a vampire living amongst an army of mutants, Jubilee struggles to find her place and to keep her vampire cravings at bay. But unbeknownst to her, one of herfellow X-Men may just hold the key to curing her of her thirst for blood. Could Professor Xavier’s own encounter with a vampire hold the key to her salvation? 32 PGS./ $3.99
Greg: There is so much wrong with that solicit, I don’t even know where to start. Lee ?
Lee: That was the weakest punt I have ever seen! But never one to run from a challange... I got nothing. It's just kinda dumb. Marvel has taken a character and changed her into a vampire so that it will appeal to the legion of Twilight fans out there. Smart move on their part. Sorry, but it does make sense.

NOW the cover... that seems to be a direct swip from the movie "The Professional" (excellent btw). Specifically, the opening sequence in which Leon takes out the other mobster. I wish cover artists would be creative these days and just not produce a zombie version of FF#1 or of a movie poster.

Come back tomorrow when Lee takes of picks of trades and hc's!
Posted by Lee at Thursday, March 17, 2011