Marvel Bringing Back Punisher and Daredevil

It used to be when a character exited stage left, he was off the radar for a period of time. Not with Marvel, Daredevil Reborn is not even completed and we have a new series by Mark Waid coming out and the latest Punisher mini-series is not completed when Greg Rucka is announced as the writer of the in continuity Punisher.

I find it odd that Remender wraps up Franken-Castle and that series goes into a mini-series to wrap up Remender’s run. I guess sales numbers and marketing research shows this to be a successful strategy, but Marvel makes it hard to follow some characters stories as it winds from book to book. So now we get a new unlimited series, it makes my head hurt. No wonder people like to wait for the trade.

I think that not allowing these characters some time away from the stage is a mistake. Once a character has been overused or ruined by an arc, I believe leaving the character sit for a period of time can be a good thing. Thor was exciting when he came back after a long layoff and in fact was a top selling book when it re-launched. Of course Marvel has oversaturated that market as Thor has a movie coming out. Also with the Ultimate Universe Marvel has even diluted the franchise even more by doing solo series for Thor in the Ultimate Universe. The proliferation of books containing these characters and the many incarnations of the same character make it difficult as a fan to invest in any of them. 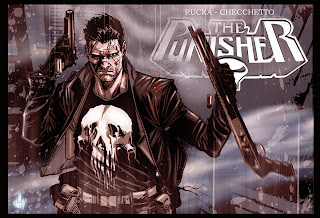 Even though the Punisher has been overused Greg Rucka strikes me as a perfect choice to examine what Frank Castle’s place will be in the Marvel Universe. In fact I would love to see Greg take it down some dark paths like having Frank kill off some guy who is corrupt as all get out, but to the public appears to be okay. DC almost had Deathstroke go that route and pulled back. I like the idea of someone taking out the bad guys regardless of whether they wear a suit or are a card carrying thug. I thought I had read somewhere that Greg had a three book deal with someone and I hope that comes to fruition still as I have missed reading stuff by Greg. Greg has done some great work over the years and I thought his Checkmate, Queen and Country, Whiteout, Stumptown were all very good to great reads. I have hopes his Punisher work will be as well. 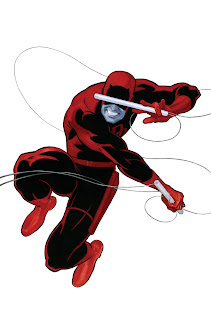 Mark Waid doing Daredevil does not excite me as much. Mark has never had that definitive run on a book yet and Daredevil seems to be an odd choice for Waid. What I was excited about was reading an interview with Mark where he states we will not see Wilson Fisk or a ninja anytime soon in the book. I hope it works because everyone always falls back on Frank Miller’s work on DD and if you are going to do DD take a chance and go somewhere new. Finally I read that Marcos Martin will be drawing every other arc of DD and that will be exciting.

In some ways I see Mark’s run on DD are having a chance to be a great one or a total miss and Greg’s appears to be a solid book from the jump. Of course I need to actually read them before judging, but hey we all prejudge things, especially when the marketing departments try to tell us every new book will be great.

The real problem is that both characters are approaching 50 years old or more and after awhile it is going to be “been there and done that” no matter what a creator does. I feel like the industry has been slowly circling the drain over the last five to ten years and how we transition from a direct market industry and become part of the digital age will be key to a comic revival or more doom and gloom.

Finally if Mark or Greg ever hit the blog and want to do an interview (or another interview for Mark) give us a holler. In fact I have an open invitation to any creator to contact us for an interview if they want to pimp a new project and we get to check under the hood (so to speak).
Posted by Jim at Sunday, March 20, 2011