Two books that could have been better

Two books that were so close to being great... 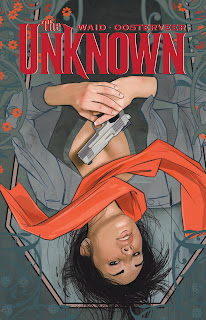 The Unknown Vol 1, written by Mark Waid, illustrated by Minck Oosterveer
Story: Catherine Allingham is one of the world’s greatest detectives. Unfortunately, she has terminal brain cancer and is going to die in less than a year. Now she takes cases that may, or may not, prove the existence of something beyond death.

The Results: Overall, Unknown is neither good nor bad. It’s a fine, non descript, non superhero detective book. The main problem with the book is that it suffers in comparison to one of Waid’s greatest works, Ruse. Ruse was the story of a world class detective with an everyperson assistant that grounded some of the sillier aspects of the cases. When compared to the lead in Ruse, Catherine isn’t all that interesting as a lead character. At times, she was mean and obnoxious but not so mean and obnoxious that I disliked her. And, when she was nice, or showed a softer side, it wasn’t fully believable. This left me in a limbo where she was fine, but not enough of any one thing for me to really feel for her.

Luckily, the art was really good. Oosterveer has a style that seems to mimic the body’s of Derrick Robertson, and the facial expressions of Shawn McManus. The mash up works well and this is a pretty book to look at.

Conclusion: It reads like Waid mailed the script in, but the art saves it from being a complete loss. 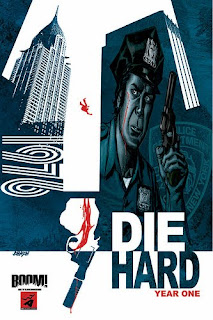 Die Hard: Year One Vol 1, written by Howard Chaykin, illustrated by Stephen Thompson.
Story: July 4, 1976 was supposed to be an ordinary day for John McClane, hero of countless Die Hard movies, as a rookie cop patrolling NYC unfortunately it turned out to be anything but.. In the right place at the wrong time, McClane gets drawn into a conspiracy to rob some of New York’s richest families at the height of the bicentennial celebration. Can he save the day and win the girl? You betcha!

The Results: Let me start by saying that I can’t believe Chaykin wrote this! Chaykin’s work has been very hit and miss the last few years with more misses than hits. I no longer buy his work on sight so you can imagine my surprise when I finished reading this and realized that the story was great. Chaykin manages to capture the feel of the Die Hard movie with a large cast of interesting good and bad guys that just happen to coincidentally meet over the course of the day. The antics in this book are tame compared to the silliness in some of the Die Hard movies, but there is plenty of movement and action to be seen. It is a Die Hard movie on paper, so if you can believe all the lucky coincidences in the movies, then you can do it here.

The problem with this book is the art. Thompson does a fine job with composition, and his people are mostly the right size and shape throughout the book. Unfortunately, Thompson can’t draw Bruce Willis’s face the same way for more than two pages in a row. To be fair, trying to draw the likeness of any movie star for any length of time is incredibly hard. But, if this book is going to be successful, then Bruce Willis needs to look like Bruce Willis. Not BW today, then BW 20 lbs lighter, then 20 lbs heavier, then older, then younger. I don't care if the face is wrong as long as it's the same wrong all the time.

Conclusion: An excellent caper story that is almost derailed by sub-par art.

SUMMARY, good books with some flaws that are best purchased when your local store has a sale.
Posted by Lee at Friday, March 04, 2011