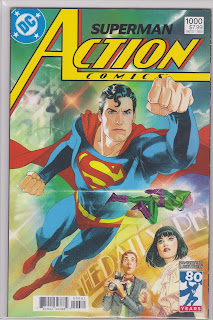 Action Comics #1000 -- So good I had to buy two copies!  Actually, I spent a great deal of time deliberating on the cover I wanted most, knowing I could only afford two.  And these were just the "regular" decade variants, not the premium offerings.  I first gravitated towards the 1930's Steve Rude cover and the 1960's Mike Allred cover, but eventually chose the Joshua Middleton 1980's cover and the Dan Jurgen's 1990's cover.  There were minor imperfections along the edges of the Rude copies and the Allred one seemed too busy after closer inspection.  The background of the Middleton cover is gorgeous and it also shows my favorite version of Brainiac and Luthor again.  I think it is important that the "1000" number be extra bold.  In my opinion they used the wrong logo though. It's the Byrne-era one (1987), but the image is strictly pre-Crisis early 80's. The Jurgen's one represents my favorite version of Superman, focused on Lois and Clark, and it contains the Superman logo. Which one did you select?

As we all know, "you can't judge a book by its cover" or at least you're not supposed to.  But in this case, the covers do a good job representing the quality stories inside. Let's explore after the break...

This landmark issue contains 10 stories and 3 pin-ups, which are listed below* and I'll briefly comment on them:

Story 01 -- "FROM THE CITY THAT HAS EVERYTHING" by Dan Jurgens

Comment: An all pin-up story that depicts Superman in virtually every incarnation through the years.  Very well done.

Story 03 -- "AN ENEMY WITHIN" by Marv Wolfman and Curt Swan

Synopsis:  Maggie Sawyer has to handle a hostage situation while Superman is busy with Brainiac in space.

Comment: This must have been an unpublished Swan tale from years ago that was recently inked, perhaps rewritten too.  I think the inclusion of a page from the SECRET YEARS mini-series was to represent that artist as well.  The Butch Guice inks really add "weight" and atmosphere.

Comment:  This is an outstanding story where the "helping others reform" Superman is merged with the "punish bad guys" Superman.  I don't think both existed at his inception.  Superman confronts the guy whose car he smashed on the cover of Action Comics  #1.  This is the same guy that abducted Lois earlier.  No need to say anything further, it's a masterpiece.

Story 05 -- "THE FIFTH SEASON" by Scott Synder and Rafael Albuquerque

Synopsis:  Superman and Lex recall an incident from their Smallville past.

Comment:  I think Maryland has been going through the Fifth Season recently.  I really liked the rendering of the "S" on his chest.

Synopsis:  Superman says Goodbye to the Earth in the distant future (and to the Kents).

Comment:  Not a lot happens, but the script is loaded with detail and sentiment.  It clearly establishes that Clark went to church when he was younger.  No, that doesn't mean he's a born-again Christian. Larry Tye's "Endurance" text piece from the Action HC states something else:

"There is one more thing that even his most fervent fans may not know about the Man of Steel: he is Jewish."

I disagree.  Sure there are elements of the Jewish faith and lifestyle incorporated into the Superman  mythos, but it's not the same as Ben Grimm (The Thing) observing his faith.  If being created by Jewish guys makes a character Jewish, then that would mean almost every hero is, including the Black Panther.

I believe the statement that Tye makes later on in the same essay is more accurate: "For the religious, he [Superman] can reinforce whatever faith they profess; for nonbelievers, he is a secular messiah."

Synopsis:  Clark has five minutes to finish a story for the Daily Planet, but there's Superman work that needs to be done first.

Synopsis:  Find out who Superman's greatest foe is at the Actionland amusement park. And no I'm not going to spoil it!

Comment:  I LOVE García-López's art!!!  After more than 40 years, he still has the stuff!  It's a fantastic story that gives him a chance to draw lots of characters too.  The last page is the best and I bet the last panel puts a smile on Jim Martin's face.

Synopsis:  The title says it all.

Story 10 -- "THE TRUTH" by Brian Michael Bendis and Jim Lee

Comment: Okay, that was an incomplete synopsis for sure (and on purpose).  Lots of Bendis dialogue, but lots of Action too that ties directly into the forthcoming Man of Steel mini-series.  Other than the "shorts" comments, which I agreed with, I really liked how Superman stopped himself before he hit the window.  Very cool.

*with no disrespect to the other creators, inkers, letterers, colorists, editors, etc. that aren't listed here.

The three pinups were by JR JR (didn't like it), Walter Simonson (nice smile), and Jorge Jimenez (beautiful).

That's it.  Short and sweet, although still taking my usual 2 hours+ to write.  I'm really out of practice, but I get to rest up now for another month.  See you next time on May 27th!
Posted by Matthew at Saturday, April 21, 2018