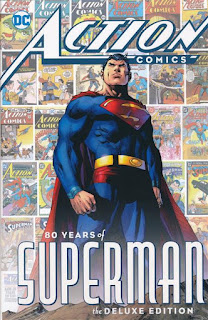 Happy 80th Birthday to Superman (and 18th birthday to my beautiful daughter, Helen [who likely will never read this]!!!  In celebration I plan on doing two review posts this week on recent publications honoring this historic event.  First up, is the ACTION COMICS: 80 YEARS OF SUPERMAN - THE DELUXE EDITION HC.

Is it wrong to judge a book by MY expectations?  How about judging it by its solicitation?  Read it for yourself below:

(CA) Jim Lee Join us for the 80th anniversary celebration of the most important comic book in American history: ACTION COMICS #1, featuring the first appearance of Superman! It's an extraordinary party as we revisit stories from across the decades, featuring the debuts of not just the Man of Tomorrow, but also Supergirl, Brainiac, the Fortress of Solitude and more! See the work of generations of top writers and artists on the original superhero! Enjoy sparkling essays from literary wizards who have won Pulitzer Prizes and hit the bestseller lists, including Jules Feiffer, who relives his memories of when ACTION COMICS #1 first hit newsstands. Plus, a historical essay by guest editor Paul Levitz, and all one thousand ACTION COMICS covers presented on a special 30' x by 39.75' poster! And as a bonus, don't miss a previously unpublished 1940s Superman tale believed to be written by Jerry Siegel with art by the Joe Shuster studio, salvaged fifty years ago and hidden away until now! This new hardcover serves as a companion to the ACTION COMICS #1000 comic book coming in March!

My first complaint: no poster.  I mean, that was one of the things I really wanted to get this book for in the first place.  Although, I should have been suspicious when the dimensions were listed in feet, not inches!

Now, I don't blame my go-to hardcover online store, InStockTrades.  Every week the new Marvel and DC books are 50% off and if you spend at least $50, shipping is free and there is an additional 2% loyalty discount when buying consecutive weeks.  Since I was already getting the latest Avengers Marvel Masterworks (MMW), volume 18, featuring the awesome John Byrne issues with the secret origin of Scarlet Witch and Quicksilver (#185-187), I was going to pay the normal $4 shipping.  So, I bought this for $10.99 ($14.99-$4), instead of the listed $29.99.  At that price, I got my money's worth (and something else to write about), but there are still issues, including issues with the issues included.  More after the break.


Let's examine the title by parsing out some key phrases.  It says "80 years of Superman", not "80 years of ACTION COMICS".  This could have been an historical account of the entire series, not centered solely on Superman, but they choose to focus it on Superman.  So, why did they "waste" valuable pages in reprinting the first Zatara story (Action Comics #1), the origin of the cowboy Vigilante (Action Comics #42), and the first Human Target story (Action Comics #419)?  I actually enjoyed the Vigilante tale, since he appears in the Bronze Age Justice League Omnibus and was on the Justice League Unlimited cartoon (I also have his action figure), but I would have preferred another Superman tale.  Also, while including such key moments as the first Fortress of Solitude, first Brainiac, and first Supergirl (#241, 242 & 252, respectively), did we need another full-length Supergirl tale too (#285)?  Those stories are reprinted a lot, how about something unique?

Remember, you can always go to Mike's Amazing World of Comics, if you want to view the covers yourself.  I was going to link them but this turned into a longer effort than anticipated.

Well, they did accomplish that to some degree.  There are several text pieces throughout the book.  The ones I've read so far are interesting, but all are fairly short.  Reading the Forwards in the Marvel Masterworks HCs is my favorite part of getting each volume, so I like a "meaty" text piece.  I did enjoy Marv Wolfman's account of when he saved an unpublished Superman story from the incinerator (back when original art was not deemed valuable), which is printed for the first time in this volume.  There is also a new Paul Levitz/Neal Adams story where Superman plays chess with Lex Luthor.  It's done in the typical [New] Adams style, if you know what I mean.

Here's a summary of the other reprint stories.  We have the first two Supeman stories from Action Comics #1 and 2.  I hadn't realized that it was a two-parter.  Then there is the first Toyman appearance from Action Comics #64.  The famous Superman Super Spectacular story from Action Comics #309, where a handshaking line of his friends is led by Clark Kent.  I've seen Fred Hembeck do redos of this cover before.  I was really excited to see that Action Comics #484 was included with the famous Garcia-Lopez cover depicting the wedding of the Earth 2 Superman.  I've always wanted to get a copy of that issue, BUT the reprint quality is really, really poor!  Worst of the entire book!  Action Comics #554 is a Marv Wolfman/Gil Kane story where Jerry and Joe create Superman to fight aliens in a universe where he didn't exist in any form yet.  It's a good story and I have an original copy, I'm pretty sure.  The only John Byrne Superman tale is from Action Comics #584, his first.  I must have reread that issue numerous times when it came out.  There is a photo-album story from Action Comics #655 and the issue where Clark reveals his identity to Lois (Action Comics #662).  Weirdly, they used the second printing cover for that one.  Finally, we get Action Comics #800, which I'm eager to read, and the New 52 Grant Morrison story, "The Boy Who Stole Superman's Cape" from #0.

Breaking up all the Superman stories (not the non-Super ones) by decades, you get the following tallies:

Can you imagine what the column chart would look like? I certainly can.  It's not what I would consider a good representation.  But then I'm biased.  You see, I grew up reading the 1971 (Crown published) tomes at the library: Superman from the 30's to the 70's and Batman from the 30's to the 70's.  Both include exhaustive historic essays by E. Nelson Bridwell.  I was fortunate enough to get my own copies about 10 or 15 years ago (for cover price [$10/each]) at a local used bookstore.  Unfortunately, then didn't have the SHAZAM volume.  There is a smattering of stories included, mostly in black and white, along with some classic covers, but not the ones for the reprinted stories (Although, hardly any are from the brand new 1970's, that was a bit of a misdirection -- Hey, at least DC is being consistent! I guess they do say "to" the 70's, not "thru".)  Anyway, that's why I was expecting what I was expecting. 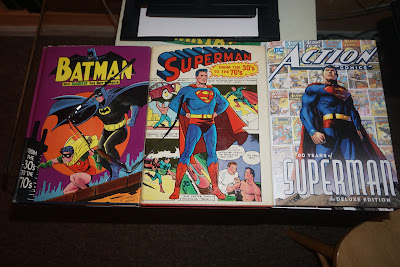 There is a small cover gallery in the back of this HC.  It includes a whopping SIX covers from each of the major COMIC AGES, some of which I'd never heard of before!  We've got the Golden Age, the Silver Age, the Bronze Age, the Dark Age [WHAT IN THE WORLD?!?], and the Modern Age.  This doesn't agree with my filing system at all!  Personally, I think DC should be broken up into Crisis eras.

I would have preferred more Superman stories and a more uniform representation. How about all of the anniversary issues, especially Action Comics #544, which I got signed by Marv Wolfman when I went to my first Baltimore Comic-Con back in 2005.  It contains the first appearance of the revised Brainiac and Luthor, which were excellently molded into plastic as part of Kenner's Super Powers line and featured prominently in Crisis on Infinite Earths.

Finally, let's get back to that title: "The Deluxe Edition".  Doesn't that suggest there is some non-deluxe edition out there somewhere?  Is there a Luxury Edition that contains the missing 30-foot poster?  Well, the answer was revealed to me by David at Cosmic Comix on Wednesday (yesterday as I write this). This was originally supposed to be a beefed up Action Comics #1000, but people complained that is should be an actual comic, instead (understandable).  The whole conversation started, because I was commenting on the rolled up poster containing every cover that was laying on the rack!  It was $10, but I didn't get it -- After all, I already paid for it, right? (and the images were likely too small to read).

So, Lord willing, I plan on reviewing, perhaps very briefly, Action Comics #1000* before my posting week is up.  That will be a nice counter to this review and boy, would I have enjoyed this HC more if it actually had been issue 1000!

*I'm sure one of my compatriots on this site may have their own opinions about that book too.  Right, Shawn?