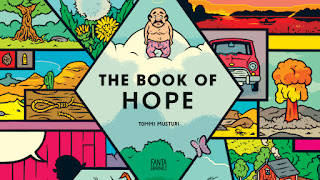 The week I read "The Book of Hope" by Tommi Musturi

Have you ever started reading or listening or looking at some work of art and immediately realized that it was something special?  This is one of those books.

As soon as I started I could feel what a work of art it was.  I could hear the whispers of the message Musturi was trying to tell me.

Sadly I couldn't make out a single word of what he was saying.  He was like the drunk at the bar who tries to give you life changing advice before passing out.  Yeah, I got nothing.  I can tell it's a great book but I'm not sure why.  But I will attempt below the break... 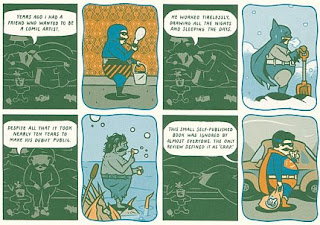 Let's start with I'm really not sure how I am going to review this book.  Which begs the question, why am I talking about it then?  Well, I wanted to talk about it because there is something special about this book.

The art is fantastic.  It's a simple 4x2, 8 panel grid which Musturi fills with images and colors.  He possesses a simplistic style which reminded me of Chris Ware.  There isn't a wasted line anywhere.  The transition from close ups to far shots between panels is amazing to see.  Somehow Musturi makes the simplest of things, such as eating breakfast, a visual feat for the eyes.

The problem for me was that I didn't quite understand the message. Allow me to explain.  Like most of you I grew up reading comics.  I started Bronze age and quickly worked my way back through Marvel's catalog reading almost everything Stan Lee and Roy Thomas wrote from 1965-75.  There was a piece of purple prose or overly wordy dialogue box written that I didn't love.  So, when I encounter a book in which the message is introspective and dependent upon self awareness... I got nothin'. 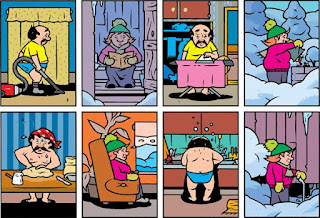 I thought it was a rumination about getting old and missed chances which made it one hell of a depressing book.  It also made me think that the title was ironic because I really found the book depressing.  But, I went and read a couple of other reviews and it's not about that.  Others said it's like "free form poetry" or something similar like that.  Their interpretation sounded way better than what I got out of the book.