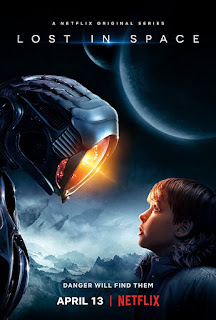 The new Lost in Space series that premiered on Netflix 48 hours ago is PHENOMENAL!!!  I absolutely loved it and would venture to say that it is easily one of the Top 10 Sci-Fi (SyFy) TV shows of all time.  Yes, it is THAT good, especially if you like a lot of science in your science fiction.  I watched the first 9 episodes on Friday, which included viewing the first episode twice.  Saturday, I watched episode 10 and after a harrowing hour of rookie driver instruction, sat down for the 11th.  But it was already over! "Oh, the pain.  The pain!"

Speaking of pain, my wife figured out what we owe in taxes this year.  You've got until the 17th to file in case you thought it might be due today.  Thus, ends the public service announcement portion of this post.

Everything about the look of Netflix's Lost in Space is incredible.  The sets and equipment are wonderful, modern "realistic" updates of the classic series.  The Jupiter 2 is round enough to evoke the iconic saucer appearance that I love so much with the addition of vital functional features (like rocket engines).  And the chariot is still the best looking mini-van on any planet!  The costuming is top-notch from the spacesuits to the fuzzy-hoodie jackets, both of which use some of the coloring from the original show.  The special effects are on par with any blockbuster movie.  The Robot is the most different looking "machine" (Sorry, Robot), but it's super cool too.

If you've ever had to suffer through the 1998 movie version, "Have no fear", this version encompasses all the best concepts and stories from Irwin Allen's most famous creation, meaning nobody is dressed up like a carrot.  My thoughts on the first season's story and the characters continue after the break, but "WARNING! WARNING! SPOILERS, WILL ROBINSON!!!"  Seriously, if you want to be surprised, watch the show first and then see if you agree with my assessment afterwards.


The casting and acting on this show is simply superb and I'm now totally on board with the changes, especially having watched the whole season.  I had a hard time accepting the disunity within the Robinson family between Maureen and John; it was really painful to watch.  In the original series, John is a professor and pretty much runs the family with a firm, but loving hand with Maureen the strong and capable, but submissive wife.  In this version, Maureen is the brilliant scientist and leader and John (an ex-Marine) is the struggling follower as he attempts to reintegrate with the family after multiple military deployments.  This is a real issue that military families encounter when "Dad" comes home after a long absence when the kids got used to "Mom" making all the decisions.  Penny even asks near the end of episode two, "Which of you am I supposed to listen to?"  The reunification of the family is a major aspect of the first season and I was very satisfied with the resolution in episode seven.  Boy, was that one intense.  Really, each episode has thrilling "edge of your seat" moments.

Penny and Will are very much like their original counterparts, although their ages (15-16 and 11, respectively) agree more with the third season.  Penny really has to rise to unexpected challenges and does so spectacularly with both scalpel and steering wheel.  Will, while super smart, is very vulnerable too and is a worthy successor to Bill Mumy.  (I really enjoy seeing pictures of old Will and new Will together on Bill's Facebook page.)  Judy is the most different, being an 18-year old doctor, and racially mixed (she was born before John met and married Maureen).  There is a great moment in the final episode, which remarkably utilized a Moby Dick-type weapon from the original first episode cliff-hanger, where John tells Don West that "crashing on this planet was the best thing that had happened to him" after he espouses what he loves about each one of his children.

If you thought that Bill Mumy would have been a great actor to portray the new Doctor Smith, well, he did!  Unfortunately, his identity was stolen from June Harris (a great amalgamation of June Lockhart's and Jonathan Harris' names) and she becomes Doctor Smith.  There is another character, Angela Goddard, which takes her name from Angela Cartwright and Mark Goddard.  Even Debbie, the Bloop, gets a makeover in this version, only not quite as noisy (cluck cluck).  Doctor Smith has always been such a complex character.  How do you balance the selfish and sometimes downright evil tendencies with likability?  Well, this modern take works extremely well.  Doctor Smith is creepy, but helpful (when it suits her); endearing yet manipulative; and the most honest liar of them all.  It's really a masterful performance that doesn't degenerate into the ridiculousness that ,while entertaining, became a major departure in the original show from it's first season seriousness.  If you look closely you can see some of the same mannerisms that Harris used, although far less flamboyant.   At least twice she goes against her strong self-preservationist nature and actually helps the Robinsons.

Yikes, less than two hours until posting time!  What with my wife working on taxes most of the day and us watching two more episodes of Lost in Space as a family, I've really got to wrap this up.  I love that this is a family show (PG-TV).  They push the envelope in terms of language for that rating, but I applaud the creators for making this show accessible to all.  Even my mother has started watching it.  My only fear is that it may be so good that it will eventually eclipse the original, or make the original unwatchable to newer viewers.  I hope that doesn't happen, since the original has always held a special place in my heart, but then I did discover it (in reruns while visiting my Grandmother in Kansas) when I was pretty young.  Thankfully, I started my youngest son, Manny (Matthew Jr.), on watching the original series on Blu-Ray a few weeks ago and he enjoys it. (We've just finished episode 9 on Friday, isn't that ironic?)  Although, he has realized that they always get out of the cliff-hangers fairly easy in the next episode.

I could go on and on.  This show is just so good.  The storytelling is great.  The mini-flashbacks interspersed with the main stories are effective.  And I don't think I've been this moved by any TV series or film is a long time.  Incorporating the fantastic John Williams "Full Forward Thrust" third season theme in the score, certainly helps.  The scene of the Jupiter 2 escaping the glacier ice in episode 3 made my heart soar!