Have you ever noticed that people have a default comic book genre?  I'm convinced that people, when they want a good read, naturally gravitate towards one specific genre.  For example, Jim loves crime noir, Matthew loves nostalgia and has a soft spot for every book from the 80s, and Thomm just love confrontation.  I meant, a spirited discussion about people's inability to use gramar correctly. 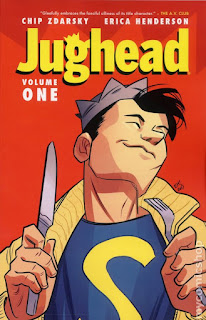 My default comic genre is always humor.  From Carl Barks Ducks to Groo to Squirrel Girl, if a comic has a good joke there's a chance I've read it.  EXCEPT for Archie books.  For some reason, I've never been an Archie fan.  But, when Archie relaunched their entire line a couple of years ago I knew I had to give it a try!  Which is why.... this week, I want to talk about Jughead Vol 1 tpb collecting issues 1-6, written by Chip Zdarsky with art by Erica Henderson.

Don't worry if you've never read a Jughead comic, the first issue quickly set the stage by introducing all the main characters and the plot.  Riverdale H.S. has a new principal and according to Jughead he's turning everyone's favorite high school into a training school for spies!  Or is Jughead just dreaming it and if it's true, how will Jughead avoid detention?


Zdarsky does a great job of updating Jughead for modern readers.  From the very first issue, the old style Jughead, Archie's goofy straight man, is replaced by a Ferris Bueller-esque savant who manipulates the system to maximum effect.  I didn't think Zdarsky wouldn't be able to keep it up for six issues but I was wrong.  Each issue featured Jughead thinking up some new and ever more creative way to torment the school's new principal.  I didn't think I would like Jughead as a lazy genius but it fits perfectly. 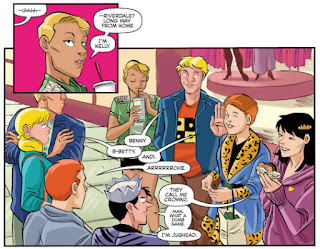 Zdarsky has a simple formula for each issue, the problem is introduced, there's a spoof dream sequence, and of course the resolution.  The dream sequences are brilliant send-ups of modern pop culture (Game of Jones!), Spies (The Man from R.I.V.E.R.D.A.L.E), and even time travel.  The dream sequences allowed Zdarsky to really use other settings and really ramp up the silly and keep things off kilter.

That isn't to say Zdarsky doesn't do a great job of silly outside of the dreams in each issue.  One of my favorite scenes is when Archie, Jughead and gang travel to the next town over and meet... Andi, Crownz and the gang???!!!!!  It's played so straight that you can help but smile! 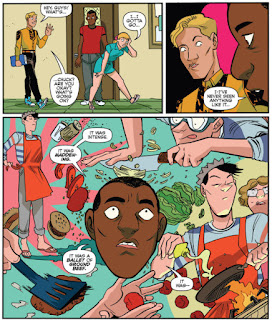 Finally, Erica Henderson does a perfect job on the art!  Her loose style is perfectly suited for the material.  She has a solid command of facial expressions which is necessary in a book without superheroes.  I loved her sense of design, like this page in which Jughead learns to make hamburgers in home economics in order to "defeat" the evil principals nasty lunch menu.   My only quibble was Betty.  Henderson tried to make her an "every girl" to offset Veronica but she never quite nailed Bettie's look.

Overall, the new Jughead series was a fantastic read that will make you smile and laugh with it's good natured fun.