Story 4/5 stars
Recommended age: 3 and up

I had no idea Lego Ninjago even existed until I had a kid. I was vaguely aware that the Lego stuff was way cooler than when I was younger (Batman space shuttle, enough said) but I didn’t know much about the stories the Lego company owned. I’ve now be immersed in the Lego movie world, Ninjago, and Next Knights. Ninjago is by far my favorite. The TV show is surprisingly well done with compelling storylines. I mean this show has not only grown and changed over time (the characters grow up, they have dynamic relationships, the writers are not afraid to seriously shake up the status quo…) but the plots have been fantastic. 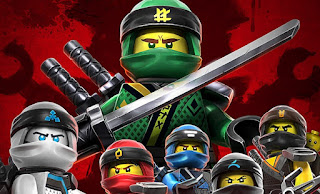 The original storyline (basic chosen one type story) was okay but the following plot when one of the main characters sacrificed himself to save his friends was very well done and fairly deep for a kid-oriented show. The current episodes have managed to take what could be a very dark theme (one of the main characters is systematically broken down and made to think he has lost most everything but he finds a way to keep fighting and is now running an underground resistance) and still make the show completely appropriate for a 5 year old. On top of all of this the show has changed with the times. Nya, the main girl character, went from being a side character to a pretty cool self-made hero, to a full member of the ninja team. While Lego hasn’t completely succeeded in integrating solid female characters in their shows they have made a strong effort and continue to improve.

Now don’t confuse this with the Ninjago movie from last year. While cute it is a very different story and universe than the main Ninjago stuff and I just consider it an elseworld of sorts.

So, what does this have to do with comic books? Ninjago is one of the only Lego stories that also has a comic book version. The graphic novels follow the same timeline as the TV show but usually have side stories that there wasn’t time to tell during the course of the TV season. They are all written by Greg Farshtey (the artists vary) and generally they are so-so in quality as the author is constrained to mini stories that could easily have taken place in the same timeline as the show. My son adores them and they are hands down his favorite comic books because he knows enough of the context of the story that he can generally tell what is going on even though they are mostly above his reading level at the moment. I’m genuinely sad that they haven’t put out new graphic novels for 3 seasons.

The books I am reviewing today are the only stand-alone Ninjago comic book material. The Dark Island Trilogy was written to take place right after season 6 of the TV show and before the TV special: Day of the Departed.

The Dark Island Trilogy story is okay but it too broken up into odd segments to really come together. The start to the story was strong with two of the characters investigating a mystery that leads them to the Dark Island (a location from the early days of Ninjago that definitely deserved further exploration). The characters come under attack from an unknown group and just manage to leave a message for the ninja to find warning them to stay away. Of course, they don’t, and that’s how the ninja and Sensei Wu end up on the Dark Island.

The strong points of the story have to do with the characters struggling against their own demons and it was interesting to read about overcoming inner weakness. This is a good talking point with my son as well and we always discuss the first rule of being a ninja: ninja never quit.

The final battle of the book was laid out well, especially giving a chance for Master Wu to shine a bit more as the ninja’s teacher is often shunted to the side of the story.

The art was nice here as well. Occasionally Lego hires artists who are less experienced and it was nice to see they kept the same solid artist for the entire trilogy.

The big reveal of the big bad guy and his plot to “take over the world” falls a bit flat. Honestly how many bad people out there actually want to rule the entire world? It is a bit silly.

My son and I both liked reading a brand new Ninjago story but it was annoying to have the main plotline constantly interrupted by journal entries written by “Sensei Wu”. They were somewhat insightful but did not hold my son’s interest as he just wanted to know what happened next. If they had been less disruptive to the flow of the plot it would have been more interesting.

Finally, there seemed to be a lot of buildup going into finding out what happened to a missing character (Kai, my son’s favorite ninja) but when you finally get to his story it was disappointing and no where near as involved as the other characters’ struggles on the island.

Overall, entertaining for Ninjago fans but it is not what I’d use to introduce anyone to the franchise. Also, it can be expensive to get ahold of as it is out of print and Lego never published it in a different format from the original hardcovers. Still, my son got a big kick out of it so I don’t have any regrets from spending the time to hunt down less expensive copies.