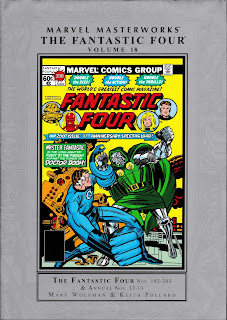 Wow, I just finished the 18th Fantastic Four Marvel Masterworks volume and in record time.  Perhaps, I consumed it a tad too fast, but I've got to ride this FF interest wave for as long as I can.  You know, before something else comes up and takes its place.  Pity my poor stacks of unread new comics; they just can't compete.  While it wasn't quite the masterpiece volume 17 was, which I posted about this past Sunday, it was still good and contains some classic moments in FF history. 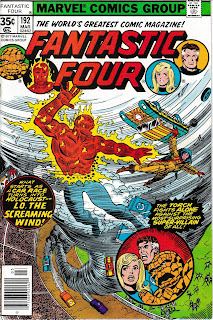 #192 -- "He Who Soweth The Wind...!":  The last Len Wein/George Perez issue (sniff, sniff).  After the FF disbanded in the previous issue, we take a spotlight turn on the Human Torch who has entered a drag race in the southwest.  He's met at the airport by his longtime friend,Wyatt Wingfoot, where he displays his powers, including a faux Torch, for some local kids.  Meanwhile, the Thing's packing for a trip to Houston, TX, where he'll test out the Solar Shuttle next issue.  The Yancy Streeter's give him a ticking good-bye present.  Johnny's main competition in the race is Rebecca Rainbow, a "friend" of Wyatt's.  It's a close race until they're ambushed by the Texas Twister!  TT was supposed to abduct Johnny for his employers, which are never revealed.  Although he most likely was referring to the S.H.I.E.L.D. Super-Agents that he's seen as a member over in Captain America #218 (aren't shared universes grand?).  Reed is offered a mysterious new lab job.  Solid, entertaining issue.  I wish this team had continued.


#193 --  "Day of the Death-Demon!":  Keith Pollard comes on board as penciller/storyteller.  He's quite good, especially when he's inked by Joe Sinnott, which he is here.  Sub-plots continue to simmer as Sue starts her acting career in Hollywood, Reed starts his research, and Johnny feels like a third wheel with Wyatt and Rebecca.  The main protagonist is Darkoth, last seen in issue #144, who has some new ampped up powers, including some cute ankle bat-wings that give him the power of flight (somehow).  He's being kept alive and manipulated by Diablo.  Both are out to get revenge on Doctor Doom, but first Diablo wants to siphon off the solar energy from Ben's test flight.  Darkoth is struggling against his "master" and tried to warn Ben of the danger from the sabotaged shuttle, because he is secretly Ben's old best friend, Desmond Pitt!  He saved Ben's life once too. The shuttle crash sequence is very well done and ends in a spectacular last-page splash. Good issue and the first one with the brief (4 months) "fat" (no month shown) issue numbering, a hallmark of  the summer of 1978.

#194 -- "Vengeance Is Mine!":  I liked Dave Hunt's smooth inks over Byrne's pencils in Marvel Team-up, but as a finisher to Keith's layouts, it seems a bit rushed and lacks detail.  The Thing just doesn't look right and ironically, he's rendered perfectly on the cover -- a George Perez solo effort, sportin' George's nifty new signature.  Darky saves Ben and seemingly destroys Diablo.  An okay issue, necessary for the story, but it could've been better. 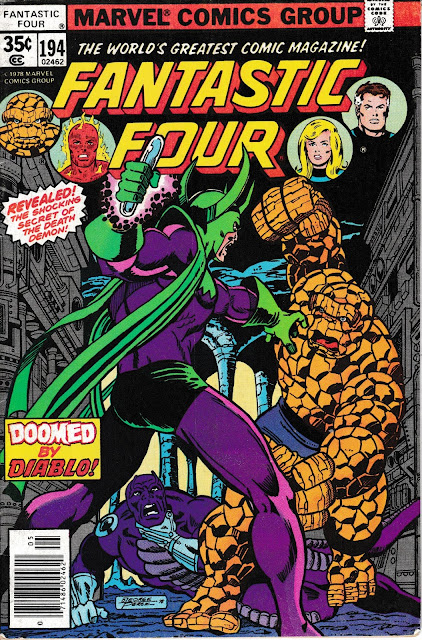 #195 -- "Beware The Ravaging Retrievers!":  Besides John Byrne's 1990 Namor solo-series, I really don't like the character that much.  And although this is Marv Wolfman's first full issue as writer, it just wasn't very interesting to me.  It turns out that Sue is working for Namor's movie studio from an early FF issue (you can buy a lot with found treasure under the sea).  Namor left Atlantis because he was ticked off at how the people were trying to Deify him. Huh? Yeah, that's what I thought too. (A lot of time is spent in many of these issues giving flashbacks that explain where a character has been and how they came back.)  Atlantis sends the robotic Retrievers (not dogs, unfortunately) to apprehend him.  Good thing Sue is on hand to help him out.  He decides to go back to his throne.  Not my favorite and never was.

#196 -- "Who In The World Is The Invincible Man?":  Great cover by Perez.  Pablo Marcos' finishes to Pollards' pencils/layouts are okay again (also present last issue), but the story is definitely getting better.  In fact, this is part one of the "greatest FF saga of all time" to be culminated in the 17th Anniversary milestone #200.  The members are almost all reunited again with Sue, Johnny, and Ben hanging out in Beverly Hills.  They are attacked by the Invincible Man (last seen in #32), who turns out to be a brainwashed Reed Richards. Reed back to his senses must continue to help his mysterious employer or his family will suffer.  Meanwhile, said family make an escape attempt only to be gassed by Doctor Doom!

#197 -- "The Riotous Return Of The Red Ghost!":  Reed gains his stretching powers again after being powerless for 20 issues!  This story is phenomenal.  I think I got this in the mail for some reason, but it's action packed and is the perfect Mister Fantastic showcase vehicle.  Joe Sinnott is back and makes all the difference.  Reed's powers are often deemphasized in favor of his brain, but we're reminded about how cool his powers actually are!  And...as mentioned last time, he got an upgrade.  Fabulous issue, probably my favorite of the entire volume.  The excellent Perez cover was actually inspired by a Dave Cockrum sketch, which is included in the back matter along with the original art to the FF #200 cover! 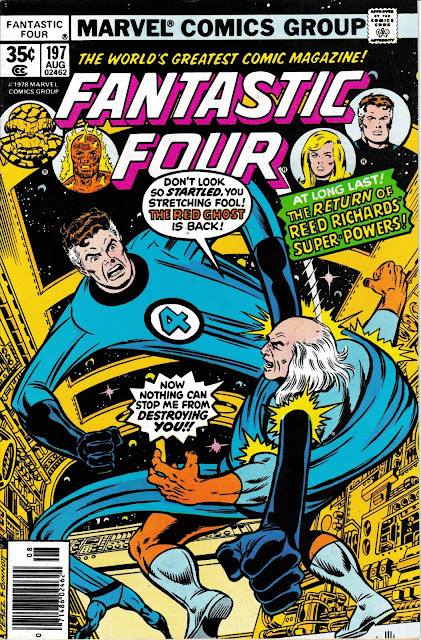 #198 --  "Invasion":  While #197 may be a personal fave, all the remaining Doom issues are great.  Reed leads a one-man assault on Latveria.  It's really cool, but a bit of a stretch when he's essentially got his hand on a Grand Tetons-style peak, while swinging around the mountain, easily several miles away?!  Pollard and Sinnott are really in the groove now with some very exciting panels.  Reed hooks up with Zorba, the heir-apparent and part of the Latverian underground.  They storm Doom's castle, but are easily defeated.  Reed shows off an awesome new ability, taking the shape of Hauptmann, Doom's scientist lackey.  Now that the four are together for real, Doom is going to use them to empower his Son!!!

#199 -- "The Son of Doctor Doom!":  I've always loved this story.  Here's Doom's plan:  Due to a Latverian law, he needs to abdicate.  So he's cloned himself (raised for years off panel) and will designate his "son" as heir (and rule through him).  He's also getting Alicia to sculpt him with a handsome face as part of a hollow statue, which will be gifted to the UN.  Everything is proceeding as planned until the FF escape and worse-yet, his son starts to exhibit their powers, including the rocky skin tones of the Thing. None to pretty for Doom (although I think he looks kinda neat), so father and son battle and Doom kills him, but the son gets to speak some truth first.  Great action, great dialogue -- excellent issue. 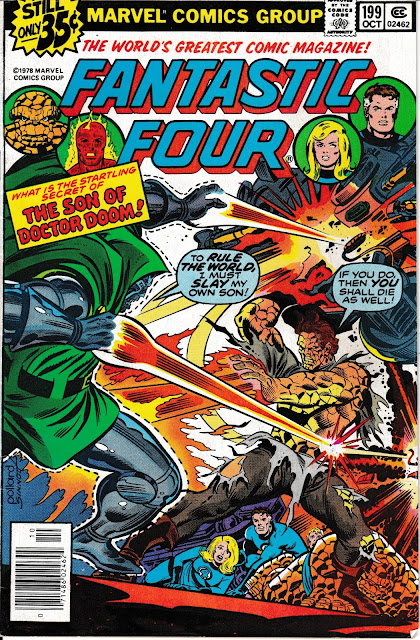 #200 -- "When Titans Clash!":  It really lives up to the hype.  It's spectacular, especially the climactic battle between Reed and Doom.  And yes, Reed defeats him alone, but even then he's trying to appeal to the nobility within the masked tyrant.  Doom's shattered visage is reflected back to him thousands of times over and he goes mad.  The other three tried to keep the UN ambassadors from killing them after Doom's statue zapped the members into submission (that's how he was going to take over the world, with a non-binding UN resolution [chuckle] -- make Doom ruler of earth or we'll put sanctions on your country [can you say nuclear war?] -- that particular point was better when I thought the UN more powerful as a kid).  Zorba promises to hold democratic elections soon [liar].  So, the FF are now into regime change.  Get your reality out of my comics, it's still a great story!

#201 -- "Home Sweet Deadly Home!":  Very enjoyable issue.  The FF settle back into the Baxter Building and we get a nifty schematic too.   Unfortunately, the building's defenses start to attack them. Wolfman said he reused this plot in a New Teen Titans story.  The traps are clever and it's fun to see how they escape them.  They break out the champagne at the end and "The Fantastic Four Are Together Again!" (after just under a year).   Oh, the reason behind the attack won't be revealed for another 16 issues...

#202 -- "There's One Iron Man Too Many":  Fondly remembered, but in actuality a bit weak.  John Buscema is guest pencilling with Joe still on inks.  The action is good, but some of the details are bit sparse and the uncoupling of the Baxter Building's top five floors, which blasts off to the tropics is a bit ludicrous.  I think the whole point is just to get Quasimodo into space.  The cover sports a reference to the 1978 cartoon series, which I've started to rewatch on YouTube -- it's really bad, but the layouts are by Kirby. 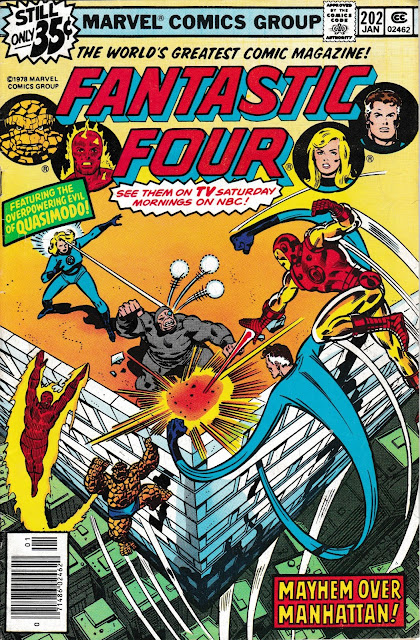 #203 -- "...And A Child Shall Slay Them!":  Good one and done and a nice opportunity for Keith to draw some African-American characters for once.  A mutant child creates evil avatars of the FF, which the team has to fight.  Reed refers them to Xavier's school -- I wonder if the child ever showed up in the X-men later?

#A12 -- "The End of the Inhumans...And The Fantastic Four":  Honestly, if it wasn't for the appearance of the Nova (and soon to be FF villain in the next FF MMW vol 19), I'd have skipped it. The story seems out of continuity, the art seems rushed....Bob Hall and Keith (before he got the monthly gig) share the pencils, but Bob Wiacek's inks are too sketchy.  The most redeeming part is an appearance of the Gong Show and the follow-up to the end of the Inhuman's monthly series.  I shan't read it again...ever!

#A13 -- "Nightlife":  A really good annual even though the continuity is off a bit.  It talks about how the FF don't have access to the Baxter Building yet, but in issue #201, they arrive from Latveria and re-rent the place (because no one wanted it).  The annual came out first, but there is not much room for this story to occur between panels in #201. (Also how Alicia got back from Doom's kingdom is never explained.)  Bill Mantlo is the writer (with Marv as the editor) and Sal Buscema and Joe are the artists.  The Mole Man is stealing beautiful art for ugly people to live in his underground kingdom.  He's a sympathetic character here.  Not a perfect story, but a nice one.

Whew, time to upload some pics and then watch AGT.  I'm already on MMW Fantastic Four volume 19 and I won't have to wait long (less than a month) for volume 20 to come out.   It was nice to have time for another post too and there maybe one more (no, not vol 19) later in the week.