I've been following Steve Conley's The Middle Age award-nominating, weekly web-comic since the beginning.  Following and backing as a monthly Patreon supporter.  This community of fans help fund Steve to find the time to produce the best series work of his career!  If he gets more supporters then he'll be able to do two strips a week, rather than just one. It takes time to create those detailed images with the lavish colors and funny/punny jokes.  Steve usually provides current status updates and bonus features for his supporters too. 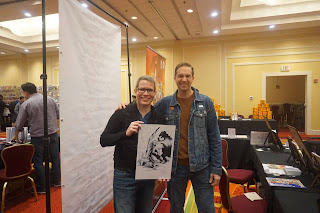 Early this year, Steve launched a super successful Kickstarter button campaign. I proudly wear the King Waddlebottom one on my jean jacket (seen above), along with two ApologetiX pins. ApologetiX, the Christian parody-band just released an awesome new single (She's Got Cooties/Dumb Questions) that I've listened to over 45 times this week at work (I just didn't get tired of it).  Now, Steve is in the midst of another Kickstarter campaign to compile his first few chapters into a glorious larger-sized hardcover (for all our middle-age eyes).  There are also a ton of cool stretch goals unlocking as we speak.  For one we're going to get a Waddlebottom solo story (and if enough people pitch in, we'll get a printed copy).

So please check it out here: 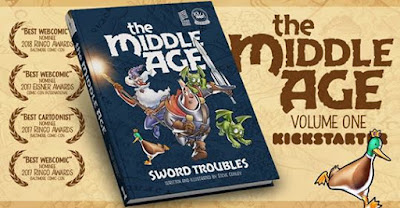 Hey, and if you just want to enjoy the series for FREE you can always do that too.  Just follow Steve on Facebook.

And although Thom Zahler's Kickstarter collection for his (SHOULD have been award-nominating [I nominated it for a Ringo]) web-comic: Warning Label is over. I posted about it a few months back.  You can now order the book directly from his store.
#warninglabelks

See after the break for Steve's inks over a Godzilla pencilled commission the late-Herb Trimpe drew for me: 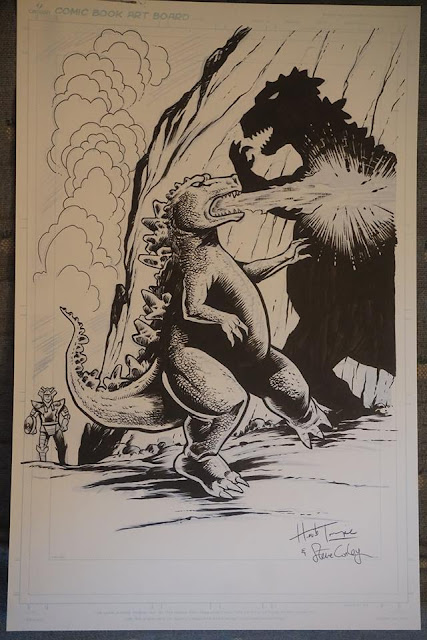