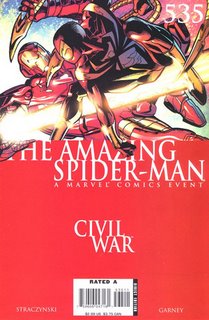 Premise - Part Four of Six of the arc entitled "The War at Home". The series has focused on Peter Parker's personal view of the Civil War and his growing unease as to which side he has chosen to be on.

What I liked:
1) The art. Ron Garney is not my all time favorite artist, but the more I see of his art work the more I enjoy it. His work at times hovers on cartoony, but is somewhat a minimalist style in use of his lines. My description is inadequate, but what I can say is it is a great story telling style and has a nice dynamic feel to the art. Reinhold appears to be a good inker for the book and the colorist did a decent job, but I thought was a little heavy handed and too dark. I worry that many colorist have yet to take full advantage of the new technology and paper being used today.

2) The return of Peter Parker. I recognized the guy I used to love as my hero. Doing the right thing no matter what the price. He is switching sides even though his identity has been compromised and he has Mary Jane and Aunt May to protect. Spider-Man felt like he was a man again and not someone's tool. It felt as good as when Batman stopped being an asshole and returned to being Batman.
3) The end scene where Iron Man and Spider-Man start to have their fight. Just neat stuff.

What I Didn't like:
1) Tony Stark. His whole characterization is so far off any previous continuity that I don't even know who the hell I'm reading about. This guy has gone from a hero to as bad as a villain as anyone could be. If this is a balanced representation of both sides viewpoint, I'm sure interested to see a unbalanced view.
2) Reed Richards. Even worse then Tony, a totally unrecognizable character. Why is Marvel spitting on some of their core old time silver age heroes is beyond me. What utter crap. I can only hope the Dwayne McDuffie can rescue the FF out of the doldrums and crap that has been laid on their continuity.
3) The awful speech that Reed Richards makes that after his uncle is railroaded, whom he loved, it made him realize you should always follow the law. What the f*#k are they talking about. When did it make Reed realize this - one month before Civil War. Just recently he defied a government mandate in his own book with trying to remake the Fantastic Four accident. And, by the way, didn't he steal the spaceship that launched him, his best friend, his girl-friend and his girl friend's younger brother into space. Now he follows the rules - bullsh*t.