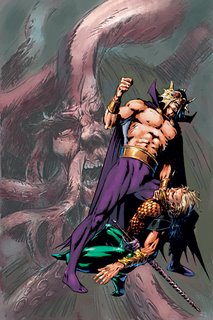 Aquaman has become a really great series. It appears as if this will be a bi-monthly series, but since it is not crossing over into fourteen other books and has secrets that effect every corner of the DCU, I can live with that. Whether it is Butch Guice being unable to produce a monthly book or Kurt Busiek having too much on his plate or any other reasons, again I can live with six issues of this book a year.

What makes Aquaman good in my opinion is that we have an almost Edgar Rice Burroughs type feel to a sword and sorcery saga. We have the mystery of why Orin (the Dweller in the Dark) doesn't remember that he was Aquaman, what caused his radical change in appearance and where did he get all of these powers he is displaying. How come the new Aquaman (Arthur Curry) become a water breather and exactly what is his origin. Why is King Shark apparently on the side of the angels. The layers of mystery and elements that are being slowly revealed are well played in this book. Instead of them hanging over our heads these mysteries make up a portion of the back story. They do not interfere with the story that started on the one year later jump and has continued forward. So the first element that makes this a very good series is the writing by Kurt Busiek.

Another element the makes this book work is the richness of the artwork. The characters are all distinctive and well drawn. The art conveys the feeling that we are underwater, yet retains a clarity. Personally it feels like there is none of the computer enhancements and shortcuts that mar many of the comics being published today. Too often we have a slickness to the artwork and coloring that seems to be burying mistakes and the lack of ability to draw the human form. The layouts in this book are well done and dynamic and enhance the story telling. Bold when needed and detailed panels when needed. The second element that makes this book is the artwork of Butch Guice.

A comic book is a visual medium that is enhanced by words and is made great when the story is interesting and well told. It is still just a few issues into it's run with Busiek and Guice but this really feels like a great story arc and could go down as an all time run on Aquaman. Ocean Master came back this issue and he is really menacing. We are following the plight of Mera and the people of Atlantis. A rich underwater world with multiple peoples and races are being developed. We stand in the new Aquaman's shoes trying to make sense of all that is happening.

It is such a good read and enjoyable book that I can forgive fighting with swords underwater, because even though it is ridiculous to the extreme it looks very cool and if we have an underwater world we need to make some of the action "realistic" from a land perspective.

Just a really, really excellent series right now and one that is making Aquaman a book I look forward to reading. Hell I'll get the trade and hard cover (if it gets that treatment).
Posted by Jim at Thursday, September 14, 2006