Why Batman is the Best Hero Ever 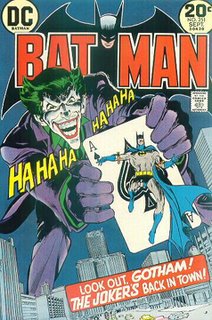 Batman is, in my mind, the best hero ever created. Now the Batman that really sold me on this was the Denny O'Neil and Neal Adams Batman. There version really brought the character to my attention and since then I have tried to examine why he is the greatest hero ever. Also since I recently heard Didio state that Batman is Bruce Wayne forever and I think he is wrong and keeping Bruce as Batman is one thing that needs to change.

I digressed for a moment, but then I do that way too often.

Batman is the best hero because first and foremost he is human. Theoretically if I had the motivation (and had the wealth) I could have dedicated my life to training and become the Batman. Strip away the money and you still have a brilliant detective and one of the best hand to hand fighters in the world. Since he is human I believe that ultimately he needs to age and then pass on his legacy.

Next up is his altruism. Bruce witnessed the death of his parents and took that as a motivation to never let what he lost happen to anyone else ever again. Some writers have made him psychotic because of this, but I see it as a magnificent obsession. Yes, he is obsessed, but in a good way and he is desperately trying to make his part of the world a better place. Bruce Wayne as the philanthropist and Batman as the crime fighter.

Third family is important. While the portrayal of Batman over the years have presented somewhat different views on this I have always seen Batman as someone who values Dick, Jason, Tim, Barbara, Jim, Alfred and others as family and always did what he could to protect them. Dick is his son for all intents and purposes and should be the one to take up the mantle of the Bat. Jason is the son who didn't work out, often despite our best efforts we cannot change someone to be better then they are. Tim is the youngest son and seems to me he would ultimately grow into a role of a leader and perhaps teacher of younger heroes. Tim also would be more of the master strategist.

Fourth, Batman does the right thing. In the Tower of Babel storyline where Batman had contingency plans to take down the JLA, I think he is right. If these heroes are ever compromised, not having a contingency plan to deal with them is foolish. Also he would never tell them about the plan as it would hurt any chance of it succeeding.

Also Batman does not kill. Now while I have almost screamed out loud for him to kill the Joker and I disagree with an absolute rule regarding anything, Batman does not kill and he sticks with his chosen moral. It shows integrity. I personally would like to see a scenario that Batman is forced to kill an evil person to save others and then have him deal with the repercussions, but Batman has always found a way to save the day without killing and that is a really cool thing. Batman remains true to his own internal code of ethics.

There are other reasons, but the above is the heart of the matter and no other hero matches Batman.