The Trails of Shazam #2 - A Review 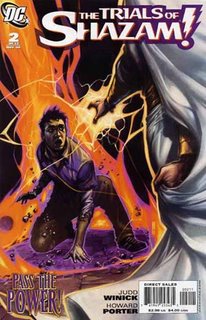 Premise - Magic has changed and the Marvel family is no more. Billy Batson has become a replacement for the Wizard and a new guardian will be needed. Freddy Freeman (the former Captain Marvel Jr.) has to pass a test from each of the gods of magic to earn the power this time and become Shazam.

What I Liked:
1) The premise and the direction the book is heading. I love when we actually have change and try to move characters forward (see all my prior diatribes about aging Bruce and making Dick Grayson Batman). I know that DC has tried to make Captain Marvel work many times, but the innocence of the character does not work as a long term character in the structure of today's comic market place. This does not mean I can't wait for Jeff Smith's Captain Marvel - because I can't - I want that series now. Just because we move a concept forward, doesn't mean we can't do mini-series or special stories of older times. BUT - now we are taking a character forward. Billy Batson has been transformed in a combination Captain Marvel and the Wizard. Freddy Freeman is now tasked with earning the power to become Shazam. A new generation is taking over. I love it. I have been following comics for years and I welcome new generations all the time. It brings in a clean slate for new stories to be done, while honoring the heritage of what has gone before.
2) The character building bits with Freddy Freeman. A nice introduction to our hero and it we learn a fair amount in a short period of time.
3) The art. Howard Porter is learning a new style and method to doing his art. It appears to be heavily computer generated and is apparently being colored by Howard also. It was a dramatic departure from his old style and he has already gotten better from issue #1 to #2, but it is just okay at this point.

What I Didn't Like:
1) The art. I know, I said I liked it, but I'm iffy on the art in this book. I appreciate the effort that Howard Porter is putting into it and if I was betting I would guess by issue #6 the art maybe great, but I feel like we are learning with Howard Porter how to make this style work in comics as he does.
2) The white Captain Marvel with silver hair. I may get used to it in time, but for me the costume is a little too... something, it's not right for me at this point. I hope we explore exactly what the hell happened to poor Billy Batson down the road.
3) Mary Marvel's fate. At this point it looks grim and I would hate for a hero that I loved (especially in the last "I can't believe it's not the Justice League" series) and who came across so heroic would end up a vegetable for life.