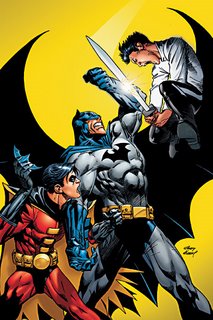 Premise - Part 3 of Batman & Sons - Wonderboys. Batman has taken in his supposed son from a long ago dalliance that he had with Talia. He brings Damian back to Gotham and tries to intergrate the boy into a more normal life. Damian has been trained by the League of Assassins.

What I Liked:
1) The art. Comics are strongly a visual medium and the art is the first thing that I always notice. Andy Kubert has a great style (the Kubert's are the Mannings of the comic book world) and I loved the two page Batcave spread. Between the six page spread in All Star Batman and this it appears all artists want to draw the cave. Great artwork, strong inking and great colors. Love the layouts usage, six panels, five panels, one panel, two page spread, just really well done.
2) Character bits. Morrison has done a great job of having Robin and Alfred in the book, but still keeping the focus on Batman himself.
3) The return of the Spook. A very minor villain, but a fun use of the character. Loved the undercover cop infiltrating the Spook's gang.
4) The fight scene between Robin and Damian in the Batcave.

What I Didn't Like:
1) That Batman just brings an obviously highly dangerous person into his domain and then runs off on a case.
2) That Robin was beaten by Damian in a fight. To be fair Robin was holding back and suckered by the kid, but still if felt like we lessened Robin.
3) That an apparent 10 year old (at best) kid pulled all the crap off he did in the book. I suspend my disbelief at the door of a comic, but expect some level of internal realism and this stepped over the bounds for me.

Side comment - since the One Year Later jump DC has put great talent against Batman and Superman and I'm glad that the two biggest and most well known heroes are being treated the right way by DC.
Posted by Jim at Saturday, September 30, 2006