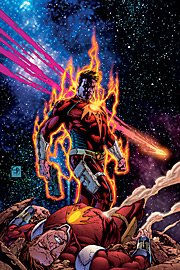 Mystery in Space was a very well done book. All reviews have an automatic basis and this book had two pluses from the jump for me. One a fondness for older characters that have had limited time in the spotlight and a creator whose work I have enjoyed before, so Captain Comet and Jim Starlin made this book a buy from the start.

Captain Comet was an older character who has been allowed to age and the first issue resolves this problem by having Captain Comet be resurrected as a younger version of himself. I appreciate the fact that a character's age is recognized and dealt with either a form of immortality, a new person taking the mantle or some deux ex machina to make them younger again. Plus given Captain Comet's powers this didn't feel as contrived as Green Arrow's resurrection.

Without getting into too much detail the reason I think this comic was well done because the stories were well written and has me wanting to come back for issue #2, the talking dog giving us the Captain's backstory, the tie-in between the front and back story, the return of the appropriately named "Weird", the artwork by Shane Davis for Captain Comet and Jim Starlin and Al Milgrom for the back up story, 38 pages of art and story for only $3.99. In one issue they have managed to give us the back story of both characters, introduce a small supporting cast and a villain, and bring to the forefront one under utilized character and one almost forgotten character.