Rise Up Against the Cynicism! 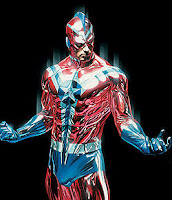 You know, considering that I never read the Kingdom Come story in the first place, I'm finding the JSA story line interesting. There are enough hints back to the original story that I know what's going on. At least I think I do. And the leisurely pace of which Jim often complains rather suits my lack of background knowledge. I'm hoping Johns turns Citizen Steel into an interesting character during the course of this story. So far the most interesting thing about the guy has been the slaughter of most of his family at the beginning of his story line many moons ago. The reluctant hero bit has been wearing a bit thin for me up to this point. Of course, if Gog gives him the ability to feel when others touch him, I wonder if he won't just end up back where he started when the story line ends (presuming all that Gog has done is undone).
I guess that's why so many comics readers are cynics. Too many times around the track with the same starting point all over again, once it's all said and done. Nothing's less final than death in a

comic, after all. At least in Marvel and DC, which is where most of us cut out teeth reading comics. I came into comics just after Jean Grey/Phoenix died (the first time). I eventually picked up those issues (no trades then), and it was a great story. It was a significant, moving story. It had real bearing on the characters in the Uncanny X-Men. Of course, it didn't hurt that there weren't forty thousand X books being published at that time, so I could read all about it in that one comic, month in and month out. Scott's grief was realistic, and the time alone that he sought was something you'd expect with a character who so often internalized his feelings.

And that lasted for a good long while, but then the inevitible end came and Jean Grey wasn't really dead. Norman Osborne isn't really dead, either, I gather. I stopped reading Spider-man before that particular travesty occurred, so I've only figured that out by second hand references. For me, Marvel is worse in this regard because Marvel was what I read from the time I was 10 until some time in the early '90s. I read the occasional Batman or Superman story, as well as a few independents, and for awhile I was really into Green Lantern for some reason, but Marvel was where I started. Now, the only Marvel I'm reading are Ghost Rider and Thor. Both are cases of me following the authors rather than any actual interest in the Marvel Universe.
But I digress.
How many times, and in how many meduims, do writers, editors, producers, studios, et al have to play the same tricks before they figure out that the trick used to keep the series alive is in fact killing the series? Dallas, anyone? 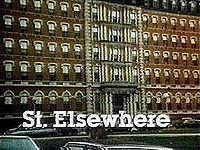 One of the worst was actually St Elsewhere, I thought. By making the entire series run a product of the autistic fantasies of a young boy, the audience was told in the last moments of the show that they'd wasted however many years watching because none of it really mattered for any of the characters involved. That was unusual in that the switcheroo occurred at the end of the series and not in an effort to keep the series going, but it still rather sucked.
Now, I don't mind a hard re-set every now and then. In fact, any time a long standing stock character like Superman, Spider-man, or Tarzan is given to a new writer to come up with a new story, that's fine, as long as it's straightforward that that's what it is. Matt Wagner's Batman stories? Great stuff. John Byrne's re-launch of Superman? Good stuff. But both were honest.

Wagner's stories are isolated stories using the character. There's no need to worry about continuity. Byrne was doing a much heralded new beginning that was re-setting continuity.


But things like the return of Jean Grey or the revival of Norman Osborne are just cop outs for original story telling. It's partially re-winding continuity, but not entirely. Other characters have moved forward, but now we're going back to this one character who ceased to exist some time ago, only to be brought back now. I gather the Brand New Day business with Spider-man was much akin to this.
You can see the cynicism in Jim every time he writes about Captain America. 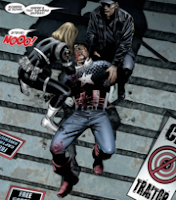 Like every other comics reader, he knows damn well that Marvel will eventually bring back Steve Rogers. The only question is when. (Of course, you can see the cynicism in Jim in lots of other conversations, but that's another topic altogether.)
And, sure, lots of villians have appeared to have died only to return from the beginning of superhero comics. But that was a kind of stock in trade within the medium that everyone accepted. Inevitably the villian would disappear at the end of a battle (if not apprehended and sent to prison), apparently dead. Never, though, was a body found, so the reader could easily know that the villian would return at some point. Jean Grey and Norman Osborne (not to mention Gwen Stacey) were, to paraphrase L Frank Baum, not just really dead, but most sincerely dead. We had their dead bodies in the stories. They were buried, even.
So, I say to you, throw aside your cynicism! Breath free of the cloud of suspicion endemic to Marvel and DC superheroes! Go out now, yes, right now, even though it's a Sunday, and buy something with definitive character growth and changes that are permanent! Get thee to a comics shop or book store! Buy a trade of Proof, Sandman, Fables, Northlanders, Invincible, The Walking Dead, Scalped! Buy singles of any of these (except Sandman, of course) or Madame Xanadu or House of Mystery!

And if you must by Marvel or DC super hero stories, leave your cynicism with them. The real world actually has consequences to actions and people do move forward. Amen.
Before you join the revolution, though, be sure to go see Madagascar 2. My wife and I took the kids (9 & 7) to see it on Friday and laughed our buts off. The little boy a few seats over from us enjoyed it so much, he laughed himself right out of his seat and onto the floor. Alec Baldwin and Will.i.am make great additions to the voice cast, though I thought the voice was Tone Loc until I saw Will.i.am in the credits. Anyway, the penguins continue to wreak havoc, the monkeys are inscrutibly English and the subtle lessons about individuality, group politics and conformity are subversive and hilarious.