Alan's War: The Memories of G.I. Alan Cope - A review 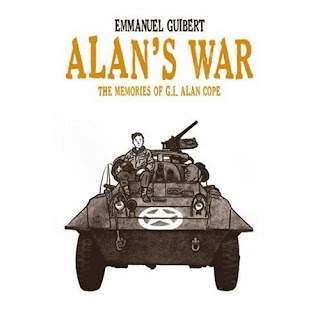 Another week, another great book that Jim and I recommended in the Indies review. This past week I read Alan's War: The Memories of G.I. Alan Cope by Emmanuel Guibert, published by :01 First Second.

Like most of the books I’m reading these days, I knew my local store wasn’t going to get a copy so I preordered it. I must confess that I wasn’t all that impressed when I first saw it. It has a simple cover and a brief glance at the interior showed simple art. I was so unimpressed that I actually used an age old excuse, “HEY! There’s a bump in the corner. This book is flawed! AAAUUUGGGHHH I can’t have a FLAWED book in my collection. Yick, yick, yick, flawed book! I’m sorry but I can’t buy this book.” That’s right, I did the lowest deed of any subscriber… I rejected a preorder book.

Luckily, my local store is run by a Saint, who rolled his eyes and said “ok”. Later that week, I ended up at Jim’s for an informal comic book swap. While there, I saw that Jim had a copy of Alan’s War. The book seemed to stare at me from the shelf. It seemed to call out to me. It was calling “READ ME YA PUTZ! READ ME!”

What can I say, when a book calls to me, it really calls to me. So I sat down and read the first twenty or so pages and was hooked. The next day I was back at the store ordering a new copy. I still didn’t want the yicky flawed copy but I did want my own.

Alan’s War is the memoir of Alan Cope as illustrated by Emmanuel Guibert. In 1943, at the age of 18, during the peak of WWII, Alan Cope enlisted in the Army. The first third of the book follows Alan during his time in boot camp and after. While in bootcamp, Alan ends up the highest rated radio operator and manages to stay in the states for two years. Eventually, Alan does get shipped out to Europe, which leads to Part 2. The second part of the book is Alan’s adventures on the front. But, to be fair, by the time he gets there in 1945, the war is predominantly over. He ends up in the southern part of Germany and Czechoslovakia racing to meet the Russians. The third part of the book is the about Alan from the end of the War until the 1990s.

I need to mention up front that Alan is a story teller. Storytelling is an art, and I am lucky enough to have had several of them in my family. I know a good story from a bad one. I know the difference between a stretched truth for the sake of a good story and a lie. Alan Cope was a storyteller. As I was reading the book, I could remember my Grandmother telling me stories about when she was a little girl. I can remember my mother telling me about growing up on a farm. There is a fluid, matter of fact, quality to Alan’s story that holds your attention.

I found each of the three sections interesting for very different reasons. Each section told a story that was distinctly different from the one previously. The first section deals with Alan, and the friendships he makes, while in the states. The second part deals with his experiences while in Europe. I’ve read several books about WWII but they always seem to be cold, factual chunks of book. I always find them interesting but in a scholarly type of way. This is a memoir. It’s a personal memory full of inaccurate details and biased impressions given comic book life. There is a certain amount of rawness to the details that can’t be experienced elsewhere. There’s also a certain amount of true reality that all the soldiers didn’t get along. And the equipment didn’t work. And the troops washed their clothes in gasoline because they had more of that than water. The final third deals with Alan growing up and learning to find his way through life.

The third section, really shined as Alan becomes more introspective about who he is and who he wants to be. It also sheds a great deal of light upon the earlier sections and why he made some of the decisions that he had. The bottom line is that Alan is a dreamer. He longs to be an artist and intellectual but he never knows how to get there. Once you realize who Alan is, it makes his experiences in the war even that much more amazing.

Finally, the art, which I had originally derided, is actually quite impressive. Emmanuel Guibert was a friend of Alan’s who also happened to be an accomplished cartoonist. Over the period of several years, he sat and talked with Alan about his life. From those discussions, and many hours of audio tape, he created this graphic novel. And, he does an amazing job of creating little photographs to go along with Alan’s tale. It’s best seen here in the preview pages here . And Visit here for a short video on how the art was made

The bottom line is this is a great book. I’m not one to typically read memoirs but I am glad I read this. It’s a fantastic book that you will certainly enjoy more than once.
Posted by Lee at Thursday, January 22, 2009