Jim: Looks to be a rather slow month for Image. I’m a little worried about Image as it seems that a bunch of books have just disappeared. I know that basically the creators are the ones backing these books, but we saw 76, Bonds and Infinite Horizon all just disappear. I know it is not a popular thing to do but I wish someone would report when a comic is being stopped.
Lee: It appears to me, since Larsen stepped down that Image has released less and less. I’m sure it’s a sign of the times but the variety of material that Image released as little as a year ago just isn’t there. 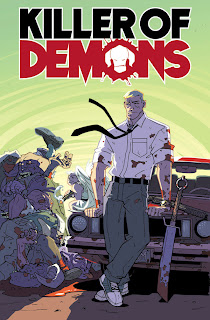 Killer of Demons #1 (of 3) story Christopher Yost art & cover Scott Wegener. Hell has invaded Earth, and only one man can stop it... junior account executive Dave Sloan, aka the Killer of Demons! With an angel at his side, Dave can see the demons that have infiltrated our world... and they all have to die! But these 'demons' are mostly Dave's co-workers at the office or people that annoy Dave in some way, leading him to believe that he's gone totally insane. Or has he? Now Dave must fight to survive and find out the truth... is he a whacked out mass murderer, or the last hope the world has against the forces of Hell?MARCH 4 * 40 PAGES * FC * $3.99

Jim: See this is a book that I believe maybe doomed to failure. The writer has done a fair amount of work for Marvel and I believe I know the artist, but the premise is out there and in a slow market the wrong way to sell this book. I think releasing it as a web comic and then selling it as a trade might generate more interest (a la Freak Angels).
Lee: Ummm, might know the artist? The guy won did fan favorite “Atomic Robo”? Yeah, we might know him. I’m amazed at how long this has taken to get into print. I met Scott two years ago at the Baltimore Comic-con and he was talking about this project then. It interesting and should be good.
Jim: My bad (as you kids say) I love Scott's work, still marketing the book wrong.
Lee: There's nothing wrong with the book. He's diversifying so he doesn't get type cast. 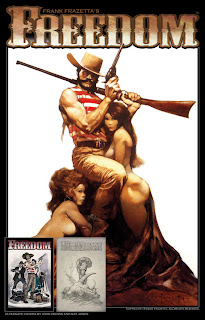 Frank Frazetta's Freedom (One-Shot) story Mark Kidwell art John Cboins covers Frank Frazetta, John Cboins & Nat Jones
MARK KIDWELL (FRANK FRAZETTA'S DARK KINGDOM) and JOHN CBOINS (GRAVESLINGER) team up for the first Frazetta Western!
In the fall of 1876, three months after the murder of Wild Bill Hickock, another legend rode into Deadwood, South Dakota.
The dime novels said he was fast with a six-gun and faster with the ladies--said he'd killed more men than he could count. They called him the FREEDOM KID.
Sometimes, the pen is indeed mightier than the sword...
...and a LEGEND is a hard thing to live up to.MARCH 18 * 32 PAGES * FC * $3.99
Jim: The Frazetta line has not been classics per say, but they are entertaining and often that is what I want out of my comics.
Lee: Not classics is being kind. Some of them have been awful. I’m not overly fond of these books and I’m surprised that they managed to keep getting published. 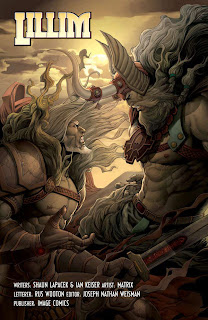 Lillim #1 (of 5) story Shaun LaPacek & Ian Keiser art & cover Matrixa A battle of epic proportion ensues in an ancient time. Since the death of his mother Lilith, Odin, first son of Adam and Lilith, vows to continue to punish Eve's children as his mother desired. The second child of Lilith, known as Loki, has had enough of his sibling Odin's grasp upon the children of Eve. After witnessing their death at his hands, Loki crawls deep into the ocean depths...and time passes. Many years later, Loki awakens to a modern world, where he meets and falls for an ER doctor named Bridgette. Their happiness is short lived, as Loki realizes that his siblings are still very much alive and wrecking havoc upon the children of Eve once again!MARCH 11 * 32 PAGES * FC * $2.99

Jim: I’m a little iffy on this book, but Stan Lee and Jack Kirby made many of us Norse Mythology fans (with a warped knowledge of the real stuff), so I’m trying this series out.
Lee: You’ll have to let me know how it goes. I’m not convinced.

Invincible #60 story Robert Kirkman art & cover Ryan Ottley & FCO Plascencia
THE CROSSOVER EVENT OF THE DECADE!Invincible is drawn into a company-wide crossover event done in ONE oversized issue! SPAWN! SAVAGE DRAGON! YOUNGBLOOD! SHADOWHAWK! CYBERFORCE! PITT! ULTRA! and many, many more all here for one issue - don't miss it!
SPECIAL FOUR-PAGE GATEFOLD COVER BY RYAN OTTLEY AND FCO PLASCENCIA!MARCH 18 * 40 PAGES * FC * $3.99
Jim: This is what drives me away from Marvel and DC, I’m thinking of skipping this issue. A real waste of my time.
Lee: It’s this kind of negative attitude that gets you into trouble. At least Image is doing the crossover right! One issue, in, out, done! You don’t have 40 other issues to buy to get the story. No fluffy-ness. There’s a better chance than not, this will be good. 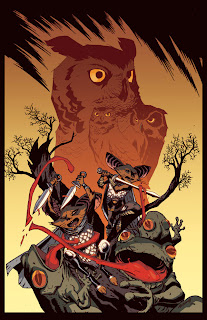 Mice Templar Sketchbook #1 story Bryan J.L. Glass art & cover Michael Avon Oeming
Filled with never-before-seen artwork by MICHAEL AVON OEMING from all phases of the development of the acclaimed anthropomorphic series. And featuring an all-new short story that bridges the gap between series volumes one and two: following Karic's ceremony, knighting the young mouse as a true Templar, Cassius is instructed to take the boy and flee into the wilderness before competing factions can exploit him. But Cassius's mission may be doomed from the very start as a tree filled with Templar Priests stands between him and freedom. Is Karic and the prophecy he fulfills worth the cost in lives and shed blood?
MARCH 18 * 32 PAGES * FC * $2.99
Jim: Wow, this book was one I cancelled early on, it must be doing well enough that they are doing a sketchbook.
Lee: It’s an artbook so it’s easy to produce. Oeming already has all the art done, Image just has to bundle it. Plus, while you might not like the story, the art on Templar was really good and that will interest the casual fan 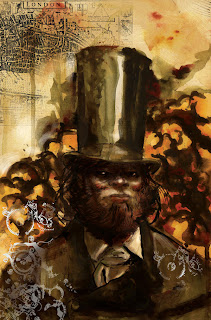 Proof #18 story Alex Grecian art & cover Riley Rossmo "JULIA," Part OneSASQUATCH AND STEAMPUNK! Proof's a young man in 1860 London. Springhel Jack is murdering prostitutes and he may be hiding out in the circus sideshow where Proof is a featured attraction. But Proof's mind is on something else: the beautiful "Baboon Lady," Julia.MARCH 25 * 32 PAGES * FC * $3.50

Jim: This has to be the best series being put out under the Image banner right now. Month in and month out this book sets the standard.
Lee: I read this in trades and I’m always surprised how good it is. 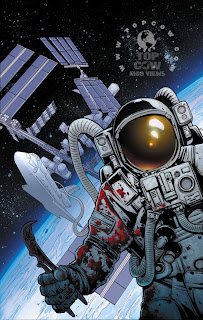 Black Vault #1(W) B. Clay Moore (A) Nelson Blake II (Cov) Jeremy Haun
From Kickstart Productions ("Wanted" movie); B. Clay Moore, the creator and writer of the critically acclaimed Hawaiian Dick; and brilliant new talent Nelson Blake II (Broken Trinity: Witchblade, Orphan) comes a gripping tale of torture, terror and the threat of nuclear annihilation...set in deep space.
When the astronauts aboard the International Space Station help install a state-of-the-art weather observation satellite, everything seems perfectly routine...until the screaming begins. Now it's up to the ISS crew to face down the threat, and the stakes are higher than they could ever imagine.
Full Color 32 pages $2.99 ongoing series
Jim: Very little sci-fi stuffs gets published, this looks like a series that I will have to check out.
Lee: Sci-Fi? Where did you get sci-fi from that write up? Crime fiction set in space, sure. Sci-Fi, no! Anyway, nothing like the hype of torture and blood to sell a comic. I think that I shall pass.
Jim: Now it sounds even better when you say it that way. Ok it is more of the old sci/fi setting with horror or crime being the real story. Still checking it out.
Lee: It's the same as the Boom! series set in space. Just with more blood if the cover is any indication. Still not getting it. Besides... the dude (or dudette) looks like a mad dentist more than an astronaut with the little pliers thingeee. Pass.

Jim: A light month from Image and I have to say that it is a good thing they made Kirkman a partner, because if he leaves Image their sales numbers in total will drop, especially in trades and hard covers. 2009 will be an interesting year for Image.
Lee: I think that 2009 will be interesting for everyone. But, Image is diversified enough that they will always offer something interesting.
Posted by Jim at Wednesday, January 14, 2009