As I'm still in holiday mode and have been playing host to my Mom and Grandmother I haven't finished much reading recently. Due to this I don't have all that much to review. In summary I've read two fun fantasy books I got for Christmas: Cry Wolf and Magic to the Bone. I've also started a book about a super powered boy who's in the closet, Hero (which was recommended by a coworker). I have squeezed in a few comics but have been mostly involved with my new hardcover (Absolute Sandman 4) which is shiny and awesome.

I have, however, been reviewing a lot of Legion stories. Most of my friends and I are gamers of one sort or another but I have to say tabletop gaming is one of my favorite hobbies. A D&D campaign I was playing in recently concluded and as such I've decided to fill that time by running my own game. I've taken the Abberant gaming system and decided to use it to run a game based on the Legion of Superheroes. 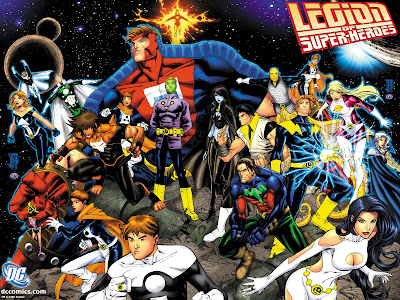 The most challenging part of this is, despite the fact that I have a lot of the setting established for the game, I have to figure out a way to combine 3 different Legion worlds and histories. I decided to combine them for two major reasons: 1. I can tailor the setting based on what I want for the story, and 2. this way my players can read any of the Legion comic books to get a feel for things without anything being given away.

So far I've had four players give me character ideas. They will all be descendants of original Legionnaires living in a time where there is no Legion (as they get to be a part of reforming it). Shadow Wolf will be a descendant of Timber Wolf and Projectra - though he himself doesn't even know his parents. Orbit is going to have gravity type powers (both sides of the power) and Star Boy would have been his Grandfather - I haven't decided who his Grandmother was quite yet. I have an great-grandchild of Mordru (and a grandchild of the White Witch) running around who decided to be a hero rather than a villain, and a character named Fix who's possibly connected to Tharok in some way. Everyone has decided to come from different planets as I've been slowly instructing my players about the different worlds of the 31st century.

I've decided that the grandchild of Brainiac 5 and Dream Girl (I decided that their romance was a bit more fun to play with than the Supergirl one) is going to be the person pulling Legionnaire descendants together to fight a building threat to the universe. I'm going to have fun building someone who has both the intelligence of a Brainiac as well as a bit of her grandmother's prophetic powers. 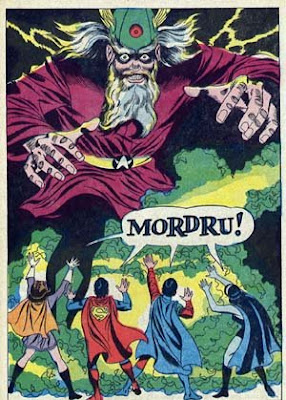 My biggest dilemma is what main villain to use. This will only be an 8 part game so it's essentially on story arc. While there will be a few puppet villains I'm debating between Mordru and Universo as the starring villain. Even so I'd hate to miss out on using the Fatal Five or even the Time Trapper. It's so hard to pick just one!

If anyone here loves the Legion and has any ideas for what they'd like to see in a Legion RPG I'd love to read the feedback!

I hope everyone is enjoying the new year :)
Posted by Gwen at Thursday, January 01, 2009

Email ThisBlogThis!Share to TwitterShare to FacebookShare to Pinterest
Labels: Miscellaneous