Spotlight Review I Kill Giants #7 (of 7) 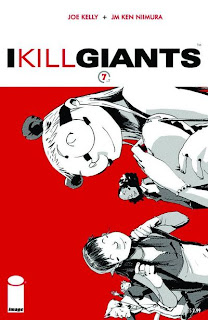 This is one of the best mini-series I have ever read. Maybe it is because I have two daughters (now 26 and 22) and maybe it has to do with the fact that my parents are getting old (89 and 86) and I realize they could die any day. Maybe it is because I never had to face the crisis that Barbara has to face but this book is an absolute gem.

Barbara is a young girl whose father has left the family and her mother is dying of cancer. Barbara’s older sister is trying to take care of the family which includes Barbara and her brother. The mother is bed ridden and also needs constant care. Barbara can’t seem to deal with it at all and refuses to go to her mother’s room to visit. She acts out by being defiant, sarcastic, anti-social, hating her sister’s cooking and all the things you expect a young child to do when they don’t know what to do. What sets Barbara further apart is her imagination (or is it) about her ability to be able to kill giants.

Over the course of the story you wonder is Barbara really fighting giants or is it her imagination. In her climatic battle with the Titan she seems to go down with the Titan as she chases it away from her family. We later learn it was a rare Nor’Easter storm that had a tornado with it. Barbara almost drowned, but fought back and made it home. Or did she defeat the Titan and learn that she is stronger then she thought.

She reconciles with her mother and manages to spend the summer with mother before she dies. The family now consists of Barbara’s siblings, but Barbara is part of the family and a happier person for having faced her demons. She is not happy about her mother dying, but she has learned to understand it and accepts that it has happened.

It is a beautiful story about fantasy, about love, about loss, about growing up, about life not being fair and about having a heart and being stronger then you should have to be.

The art is a manga/Calvin & Hobbes style that is designed very well and conveys all the story elements with clarity. The emotions of the characters are evident in a simple line at times to represent a frown or a smile. Each character is distinct and you never have to think is this character Barbara or someone else. The Titan is the right mix of menace and fantasy as to be a perfect.

It sounds ridiculous to call a book a classic, that has just completed, but this book is just that. It is a true all age story and one I would have happily read and shared with my girls when they were younger. I’m happy to have read it now and think I have learned something about dealing with inevitable loss, especially as it stares you in the face. I hope I can ultimately deal with death as elegantly and honestly as Barbara eventually does. I’ll get the trade, I’ll buy the hard cover, I’ll give this book to anyone who has a heart.

GRADE A+ - An absolutely wonderful story that made me happy and sad all at once.