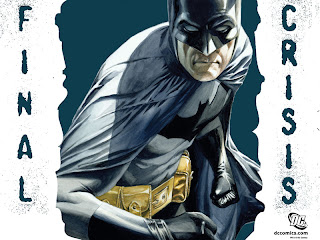 After having read Final Crisis #6 and experiencing the “Death of Bruce Wayne”, which I have learned later is really him being thrown into the alternative realities that he will have to fight his way back through, I started to marvel at all the ideas that Grant has running through this story. This series is overloaded with material.

We have the death of the New Gods and all the implication that it implies as the fifth world begins and our Earth is taken over. You have all of the stuff going on with Wonder Woman as the new female furies, Checkmate fighting back with OMACs, the JLA shattered, and the Tattoo Man becoming a good guy. I mean the story lines are so incredible and there is so much going on and all we are getting are the highlights. Instead of living the Final Crisis I feel at times that I’m just flipping through a photo album of WWII as opposed to reading a history of it.

I know there are so many elements going on that even with over 200 story pages we can only skim the surface, but I would love to see more of this story.

So why wasn’t this DC’s weekly book? Grant obviously has enough stories that he could fill over 1,000 pages. I bet Grant’s notes for this story are that long if not longer. I know that JG Jones could not have been the artist for the entire run, but planned out well enough and you could have had Carlos doing the first four, then JG Jones doing four, then Mahnke doing four issue, then Starlin doing four issues and continue with a couple more artists then repeat. Can you imagine the sales giant this would have been for DC. As the series was winding down DC could have fit their continuity into on a slow and more controlled basis over the year.

Instead we are given Trinity. The two biggest problems with Trinity is the story is dragged out 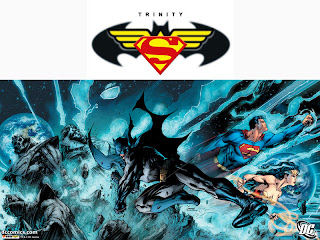 till the nth degree and that it was advertised as staring Superman, Batman and Wonder Woman and while the book has its core being about why they are important, the middle third of the book does not even having them appear. I’m tempted to drop Trinity myself even though I think the book is well written and Mark Bagley is drawing his butt off and doing a fantastic job. I was drawn on one premise and the book is something else and the story is stretched to a length that the story does not justify. This should have been a seven issue mini-series.

As poor as Marvel’s Secret Invasion was, you can tell the company has solid planning in how they are approaching stuff and they build a solid core universe. DC needs to step up their planning and have editorial retreats with their writers and plan things out long term for the DCU. You can always hang other titles off that plan and change as you go, but it is apparent DC needs to plan better and in my opinion Final Crisis would have been a magnificent book to do as a year long weekly series. The book is fighting to be contained in the pages it has been given and is overflowing, while Trinity is treading water in the middle of an ocean waiting for the last wave to being it back to the beach.
Posted by Jim at Saturday, January 17, 2009