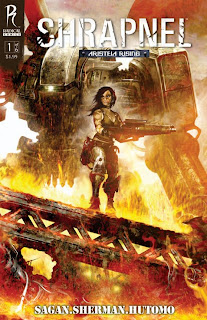 
First off 48 pages for $1.99, are you kidding me. Wow, Radical is always going out of their way to make sure that the consumer is being given a quality product and helps consumers to be able to try their product for a reasonable price. Radical and BOOM are my two favorite small press publishers, because both companies are always doing their best to give us a quality product and give us some really diverse offerings.


Two of my favorite movies are Blade Runner and Gattaca, both are science fiction classics and it appears to be that the creators and writers of these book share some of that love as the influences of both of those movies can be seen here.

The Blade Runner influence is felt in the setting of the story as this is set in a future with no fixed date, but the Solar System has been terra formed and settled by colonists. The core industry seems to be mining on the planet Venus, which would make sense as the exportation of the planet’s resources, would be a main reason to colonize the planet. As with all colonies, we are at a time when these worlds have become independent, but a group within the Solar System is exerting their will on all worlds. If you watch Blade Runner a lot of what was going on in the background is what is happening here. Also the look of the city on Venus we visit is straight out of Blade Runner.

The Gattaca influence is also evident as this society has two sets of humans. Helots are the non-genetically enhanced persons and Genotypes (or slang term splicers) are the humans who were genetically enhanced. This creates a society of have and have nots at a core level of what you are genetically. I have always enjoyed this concept because the logic of this happening in the future appears inevitable. If you where having a child how could you not want your children to be disease free and then how could you not want them to be stronger and smarter. Of course this technology would cost money and the upper class would be the first to use it and eventually it would create two sets of humans. Why I love Gattaca so much is it shows that regardless of genetics it is the human spirit and desire that is the true measure of a human.

So we have the backdrop of a war within the Solar System and the focus being on Venus and a smaller focus being on the central character Sam. Sam is living in the Helot side of the world and as it is revealed she is obviously a Genotype who has had a tragic history. She has a hologram doctor who is trying to help her through her post traumatic stress, but Sam is not responding to therapy and appears to have been running away from everything. When the war comes to Venus, she has to make a choice to run away or become what she once was, which has not been revealed. It is pretty obvious that she is a warrior and a top notch one at that, but this issue we have not yet seen her in action. This issue ends with Sam strapping into her ship and taking off, to run away or go to war is not answered, but I’m guessing to go to war.

The artwork is excellent. At times it is a little muddled and dark, especially during some battle scenes, but I think it actually works because in a battle of this type you would not necessarily know what the heck was going on. Otherwise the art certainly is laid out well and conveys the story very well. The art feels like a painted book, yet has the details of very tight pencils at times. I wish I understood the process better, but suffice to say the art works great for this story.

The battle has soldiers on both sides wearing battle armor, which certainly would lend itself to a video game. I have grown accustomed to the idea that any really good story can be used in any medium. We have novels of video game premises, books that become movies, comics turned into animation, and on and on and on. It strikes me with almost every Radical series to date that the ease in which these stories could be cross marketed is amazing. Every single book they have produced to date has marketability into movies, video games and animation.

Finally the story itself is a great read. It had the feel of a true graphic novel. By that I mean that the story is reading like a novel. We are establishing characters and a world setting and by the end of issue one you understand what the world is like, what the politics are like and have a great baseline and handle on who the main characters are. This is a text heavy book that does not explain what the art is telling you, the text is giving us the depth and detail of what the art cannot convey. At the same time it does not feel overwritten, the writer backs off when the art can tell the entire story. It is an excellent blending of words and pictures and both enhance the other, making this a read that is not a five minute one, but is one you want to savior.

Ultimately any good series has to be judged as a whole, but I feel confident that a series that starts off this well will not disappoint. I’m looking forward to the entire Solar War Trilogy that is being promised. Click on the hyperlinks above to see more detail of what is going on with this series and Radical.

Overall Grade A – Shrapnel delivers a high octane future war story with characters that you want to know.

Run out to your local store and get this book. For $2 it is the best bang for the buck on the stands and starts off 2009 on a positive note.
Posted by Jim at Saturday, January 10, 2009