Dark Avengers #14 – A Review of Sorts 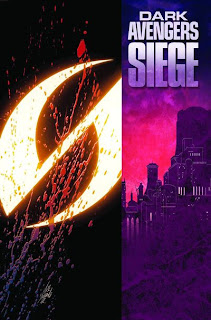 Hi boys and girls I’m back and hope to be doing more reviews as the weeks’ progress. I have been hibernating in the deep snowfalls of the fuc**** tundra wonderful city of Baltimore. Onto the review.

What I find fascinating about this is the story that is going on in Dark Avengers is happening before the Siege, which it is purported to be a part of. Also Dark Avengers for all intents and purposes has become the story of the Sentry. The Sentry is such a misconstrued character that I’m not sure where he will fit anymore other then the mad villain of the piece.

I have not gone back and re-read all of the Sentry material but I do believe that Marvel has retro-con the character all the way back into the sixties. But of course it was not the sixties because Marvel has the sliding scale of continuity which says everything happened within the last ten years, unless of course we want to use something from some other time. I have harped on this before but Marvel suffers from the weight of the past history their characters carry on their backs. These characters all started out in the early sixties and now carry the weight of that continuity around their necks like an anvil. No matter how they try to slip away from it that anvil drags them down.

The Sentry was retro-conned into having a more elaborate history and now he is a totally unstable character who was a punk before he got the powers of a god and is a punk again with the powers of a god, but he is the dark side. Marvel has a history of making their villains so powerful a rabbit out of the hat is the only way to beat these creations.

Back to the story at hand, I find it fascinating that Bendis is giving us the prequel as he is telling us the main story line in “The Siege” mini-series. I don’t remember every seeing that story telling technique and if his previous work had been plotted tighter I think this would have worked better. I'm guessing these events are why the Sentry is ripping Ares in half and has no issue in taking Thor out as he is now the Void.

This issue was all talking heads with dramatic moments which would cause a sound track to have heavy crescendos. I hope it is never made into a motion comic as the dialogue spoken would make a six year old cringe, but that is part of the charm of Bendis’ writing. Of course if a third rate artist was drawing this and not Mike Deodato (with Rain Beredo on colors) the book would probably be way down the charts.

At the end of the day it is a professionally done comic but I think it fails to hold true even to its own internal logic. But again with the anvil of time strapped around these characters they have to become malleable as silly putty to make them exciting, for me it is entertaining from a standpoint like watching a car wreck, I hope no one is hurt, but I still like seeing the cars smash against each other.