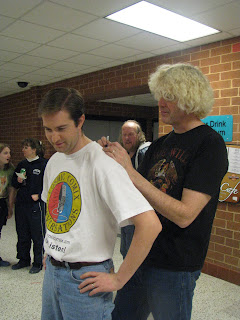 Last month, I attended my 20th ApologetiX concert. This one was held in Fredericksburg, VA, but I’ve traveled as far as Pittsburgh, PA to see the band. The last concert I attended was held in that “city of champions” back in October, when my oldest son and I went on a road trip to see them record their new LIVE album, “The Boy’s Aren’t Back’n Down”. If that title sounds vaguely familiar, you’re probably thinking of “The Boys Are Back in Town” by Thin Lizzy. You see ApologetiX performs Christian parodies of rock songs. The lyrics are superb and they are all excellent musicians – their parodies sound almost exactly like the original songs. If you’d like to purchase their new album or find out more about the band just visit their website: http://www.apologetix.com/

So, what’s that got to do with comics? Well, more than you know actually. J. Jackson has been the lead singer and lyricist of the group since the band started 18 years ago. He also happens to be a friend of mine as well as a fellow comic book fan. He even has had two letters 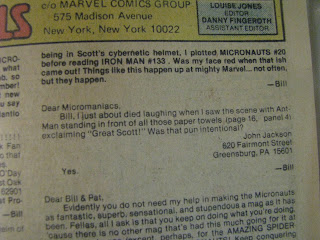 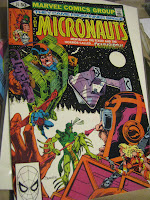 printed in Marvel Comics: Micronauts #25 and Marvel Team-up #105. Well, after the show I had J sign my Cosmic Comix Conversation T-shirt to commemorate my concert-attending milestone and he asked a simple question:

And you know what, I hesitated…I mean I couldn’t come up with an immediate answer. In fact, I really didn’t even know where to begin. My wife chimed in and said “It’s got to be Spider-man of course – you used to drive around in a car with a “SPIDEY” license plate.” She was referring to my old 1977 Chevy Nova (black and beautiful) that I got in my senior year of high school. Man, I loved that car, but I… “sniff”… traded it in “SOB” after I graduated from Tech, so that I could get an economy car for commuting “WAUGGGH!!!” I even had a black costumed Spider-man 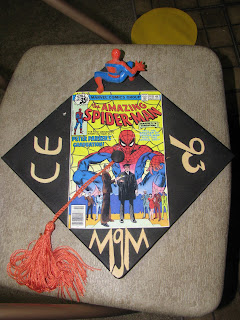 (Mattel Secret Wars action figure) hanging from my rear-view mirror and I was known as “Spider-Matt” in the dorm. A color copy of the cover of Amazing Spider-man #185 graced the top of my mortarboard when I graduated. For much of my life I identified with Peter Parker like no other comic character (and getting married to my best friend like Pete marrying MJ is my favorite similarity).

With so much history between Spidey and me, why would I hesitate at J’s simple question? Well, I think it comes from the fact that I haven’t regularly read Spider-man for 5 years. The Sins Past story line where it’s revealed that Norman Osborn fathered Gwen Stacy’s twins was too much for me to bear – I dropped the book right at the counter and wouldn’t even purchase the issue in my box – ending my consecutive run of Amazing Spider-man to 499 issues. I even was on a JMS boycott until I read his first Thor HC, which was excellent. I almost jumped back onto the Amazing Spider-man bandwagon after reading issue 600, which I reviewed on another site. However, issue 601 and the aftermath of Peter’s drunken “hook-up” with his roommate, kept me away. That’s not the Peter Parker I remember and it certainly isn’t the Peter Parker I always identified with growing up.

So, what’s going on in current continuity actually does seem to affect my like of a character. I’m for change and growth in characters (I love the Spider-Girl alternate reality series), but they need to remain true to their characterization. Now that I’m reading the Green Lantern archives, I can imagine the outrage when Hal turned into Parallax the first time. Of course, we now know that wasn’t the same Earth 1 covered in the original stories, so that makes it better. I really enjoy Mark Waid’s “Irredeemable” series, but I’m especially glad that he could not tell that story in a Superman’s Elseworld tale. There are just some things you shouldn’t do or mess with. 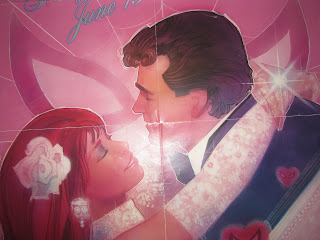 In a future post, I hope to write more about the Spider-man newspaper strip HC I’m reading, but I will say that it’s helping to remind me about how much I still like “classic” Spider-man. So, from a historical standpoint, Spidey probably is my all-time favorite, but I like so many others, in so many different genres – you can’t always compare them. Ironically, our local store is holding an online tournament of comic characters starting Monday, March 1st, akin to the college basketball playoffs. You can visit it, and see the brackets here.

Unfortunately, I didn’t vote on the nominees, so I’m left to pick from the characters listed. However, at least there is a variety to choose from and the match-ups should be fun. Will Spidey come out on top? Will I continue to pick him throughout the tournament (I don't know Galactus is pretty tough)? Now, if it were Spider-man versus Spider-Girl or Owly – he'd never make it to the next round. 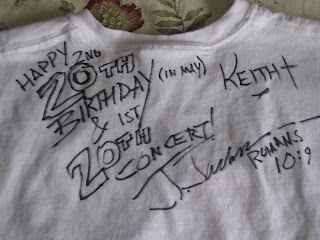