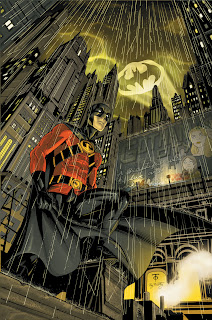 
I'll admit I've missed a few issues of this book what with moving and all - but this seemed like a good issue to pick back up on the story. I like that Tim's back in Gotham and it should be interesting to see what happens with Ras. I really like the guest appearance of Conner - its nice to see Tim in a bit of a better place. 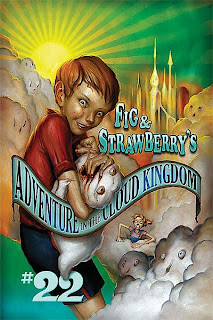 
Okay, I was icked out by the ending of this issue. I mean, I'm sure that was the intent - but really. I hope that the insinuated incest forthcoming is just insinuated. That the writer is just trying to keep people reading and that nothing happens between Fig and her supposed brother. Because that is just more than I want to know. Or read about for that matter. Ew. Also the idea that she all of a sudden has a brother is odd - I'm not sure where this is going. I miss Harry. 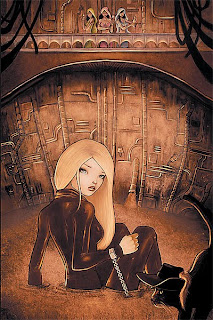 I really have a enjoyable time reading this book. It isn't the best spy story I've read but it's fun and entertaining. I really liked the addition of Puss in Boots to this issue. Of course it may have been funnier if the mouse had been summoned instead. Then again I don't know that the mouse could have done much to help save Cindy. 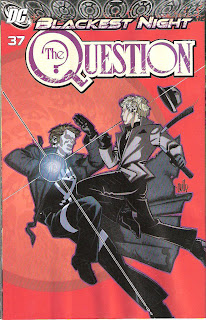 
The only reason I want to mention this book was the great way Shiva dealt with the undead - by becoming emotionally invisible. That was awesome. It made me like Lady Shiva more. Almost as much as I liked her when she was playing Black Canary. 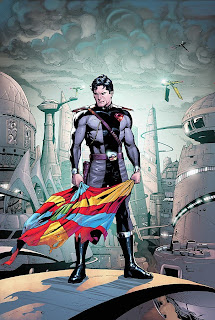 
Well this was apparently the final issue of this book. It's been interesting to see Superman in a new environment but I'm glad this story is moving on as the book was draggiing a bit for me. I've found myself much more interested in Supergirl as her adventures have been about her coping with trying to help on Earth while she's not welcome. I'm glad it's beginning to all tie together as far as the Superman books are concerned. 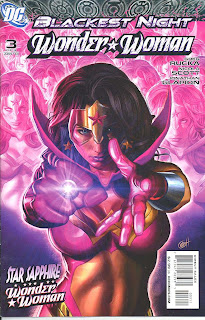 
Wonder Woman as a Star Sapphire is awesome. I think I missed something to do with Mera and the Blackest Night stuff... I'm not quite getting what WW's revalation was. Hopefully it'll be explained later. Or I'll have to go back through the books. Was it the whole not wanting a baby thing mentioned in the Parralax rebirth issue of GL? Ah well. This was a good Blackest Night issue and offered some insight into the idea of wielding a power ring. I'm really looking forward to see where all this craziness goes.
Posted by Gwen at Friday, February 19, 2010