More trades than usual this month. It's a combination of Cards, Comics and Collectibles (of Reisterstown, MD) having its usual winter sales, and Christmas gifts I just got to this month. It'll carry over into February, too, as the sales continue and I got a gift card from a friend. Anyway, off to the races...
1. daytripper 2 - This vaulted up a bit because I'm really intrigued. It had me to start wi

th just because of the setting in Brazil, a country with which I am somewhat familiar, but have not read a single thing set there. No movies I can recall seeing that were set there, either, so this was fertile now ground for my ever rapacious interest in other cultures. With the second issue, I'm totally on board with following where Fabio Moon and Gabrial Ba are leading. Not only do they show me an in depth look at Brazilian culture, with which they're intimately familiar, they're presenting a story that has me wanting more while puzzling where they're going. So far, the lead character of Bras de Oliva Domingos has died twice in totally unrelated ways. Each time an obituary has been written for him. This not being a superhero comic, we're either working on the deeply mystical or Bras is an obituary writer who fantasizes his own death at various times in his life by various methods. Or it's something else entirely. Can't wait to find out.

2. Fables 92 - Now we're back at full speed here. If daytripper weren't something spectacular this month, Willingham's opus would be at the top for sure. This first part of two looks like a detective fiction with fables and goblins in lieu of humans, though this detective fiction has a lot of potential political overtones. The developing relationship of Flycatcher and Red Riding Hood is also piquing my interest.

3. Northlanders 24 - Speaking of opus, Brian Wood's nordic magnum continues apace with the 4th in the 8 issue Plague Widow story. Wood took a somewhat unexpected turn in making our titular character's nemesis, Gunborg, a heroic personage in this issue. Presumably Wood will reveal what happened while Gunborg, alone after his men refused to go forward, went on to a neighboring settlement to see if help was available there. Common theme so far in the List? I'm eagerly awaiting what's to come.

4. Madame Xanadu 19 - Another great issue from Matt Wagner. We've dropped out of the 1960s setting where Nimue (aka Madama Xanadu) has been slammed by her sister, Morganna, into the back story of their relationship from the time of mages, which surplanted the time of fairies, to the rise of humans and the fall of Camelot. Joelle Jones is the penciller on this one and bears mentioning for the layouts reminiscent of illustrations of Medieval texts that brackets each era within the story. Of course, the story itself is wonderful in developing these characters and the relationship between them, as well as their older sister, Vivienne.

5. The Walking Dead 69 - To some extent this is the usual Kirkman excellence, but it gets a little boost on top of that because the intrepid survivors of post apocalyptic zombie world are now treading the familiar ground of DC, Virginia and Maryland, just down the road from where I live. Hopefully Kirkman is also foreshadowing some developments in how the world came to be in this state, though he's frequently stated he's not so interested in that so much as how the survivors survive. There's also a preview for an upcoming Image book called Choker, which isn't getting my attention with this teaser. I'll reserve for further input before considering it.

derella From Fabletown with Love 3 - Ah, more fine progress in the tale of super spy and Fable, Cinderella and her reluctant partnership with Aladdin. Cinderalla certainly maintains some old school attitude with her seduction and teasing of Aladdin this go 'round, perfectly in keeping with someone who's spent as much time in European and American culture as she has, and in keeping with the approach such a smart woman would take with a Fable like Aladdin. Hell of an interesting debate between Cinderalla and Aladdin on the merits, or demerits, of Islam, too.

7. Stumptown 2 - This book could easily be higher on the list, but it's a tough month. Dex Parios may be my favorite woman in comics now, which takes some doing with Nimue, Hilda of Northlanders, and Cinderella, but also explains why it's a battle royale here in the top of the List. Dex continues her investigation of the disappearance of Charlotte Suppa, and tracks her down this time. Now she has to figure out why there's a tie between Charlotte and the Marenco family, which allegedly heads the Pacific Northwest branch of Mara Salvatrucha, better known as MS13. And we're still in "I can't wait for more" territory. I'm still loving the pages at the back of the book that delve into artist Matthew Southworth's process of making the scenes and people depicted come alive. Love the Army jacket bought in Pittsburgh, too. Go Steelers (well, next season).
8. U

nknown Soldier 16 - This has got to be the best book ever to use the name of a much known and well liked character, yet have absolutely nothing to do with that character. Aside from the lead going around with a bandaged face all the time, and some hallucenogenic hints that the original Unknown Soldier is in our current emodiment's head, there's naught to do with the original here. The shift into a sort of detective story continues, as our "hero" steps into the role of camp doctor while trying to figure out who killed his predecessor. The hints at the psychological distress imminent for him in this return to his peaceful past are nice foreshadowing.

9. Jersey Gods 10 - Barock and his brother Serius rush back to Earth to investigate the attack on Rushmore while Zoe takes a more circuitous route with their mother. The bizzaro cubed Earth is a nice touch to the ongoing homage to works that have gone before, and the death of Helius's son is meaningful and touching. Where's my full frontal nudity of Zoe, though? :-)
10. Terry Moore's Echo: Moon Lake TPB - This was one of the Christmas gifts. 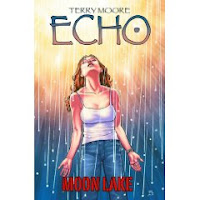 I'd heard nothing but glowing reviews of Moore's work here, and I have to agree. Domestic distress, corporate intrigue, governmental conspiracy, scientific phenomenon, betrayal, and a cool ass flying suit. This book has a lot going on and a lot to recommend. Like the rest of the protagonists on the top of this List, there's depth and contradictions to the lead character. I'm getting further installments as soon as I can.