WORLD WAR HULKS #1
Written by JEFF PARKER, PAUL TOBIN, SCOTT REED & HARRISON WILCOX
Art by IG GUARA, RAMON ROSANAS, ALUIR AMANCIO, TERRY AUSTIN, RYAN STEGMAN & TOM PALMER
Cover by JOHN ROMITA JR.
After the jaw-dropping conclusion of FALL OF THE HULKS, secrets, mysteries and surprises galore are revealed in this giant-sized, bone-crushing, gamma-irradiated special featuring key players of the biggest Hulk-saga ever told: A-BOMB, COSMIC HULK, RED SHE-HULK, DOC SAMSON and DEADPOOL! What is the heart-breaking decision that Rick Jones must make? Is there a hero left in the dark abyss of Leonard Samson’s distorted mind? Whose appearance will shock the wild Red She-Hulk to her core? Can an ancient alien technology spell certain apocalypse to the world? Don’t miss out on this essential assembly of startling secrets in one of the greatest conspiracies in the history of the Marvel Universe!!! 56 PGS./One-Shot/Rated T+ …$3.99
Jim: No let up from Marvel regarding the whole mini-event thing. They have to be worried about even mini-event fatigue with some things. Hulk has been running on event mode for a few years now so I guess no regular series will ever be published again. What this means is we lose the characterization bits which I love because it is always a non-stop adventure in this mode.
Lee: Yep, I love the transition from mega events to mini-events. This is sssooooo much better. But it goes back to the point I made yesterday, will this be re-readable? I somehow doubt it. Although all the punching with no characterization is a wonderful return to Marvel in the 70's. 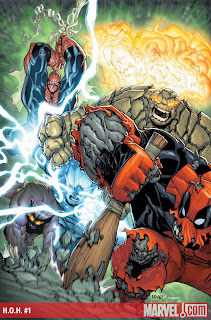 H.O.H. #1 & #2
Written by JEFF PARKER
Pencils & Covers by HUMBERTO RAMOS
Issue #1 & 2 Variant Cover by ED MCGUINNESS SOLICIT & FINAL TITLE CLASSIFIED UNTIL THE FINAL PANEL OF THE FALL OF THE HULKS IS REVEALED.
40 PGS.(each)/Rated T+ …$3.99 (each)
Lee: I can only judge this storyline on its cover and I’m sorry to say but this looks stupid. I wonder if H.O.H. is “House of Hulks”. The perfect book-end to “House of M”.
Jim: Yeah the idea of taking your character which was unique and just making everyone into that character is incredibly stupid and with nothing else but a cover to judge it on stupid seems to be the consensus. 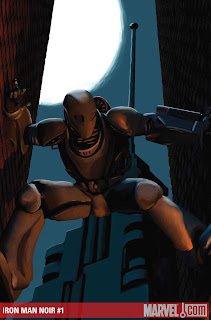 IRON MAN NOIR #1 (of 4)
Written by SCOTT SNYDER
Penciled by MANUEL GARCIA
Cover by MIKE FYLES
Finally, IRON MAN enters the world of MARVEL NOIR, with an action-packed pulp reimagining like you’ve never seen before!
In 1938, Tony Stark is a daring adventurer, traveling the world in search of its mythological treasures and trying to forget the responsibilities of an iron magnate. From the Fountain of Youth to the hanging Gardens of Babylon, Tony has conquered them all…but only his closest confidants know it’s all one last-ditch effort to cure the disease that slowly killing him. But someone has been selling out Stark Industry secrets to Count Nefaria and his Nazi sympathizers, and it’s only a matter of time before they catch up with Tony on his latest quest! 32 PGS./Parental Advisory …$3.99
Jim: Some characters are a natural for the noir treatment and some you have to wonder why. This is one where I really wonder if it will work.
Lee: How can this work? Make him steampunk???? And, let's not even discuss how Stark is now Indiana Jones! This has bad, bad, bad written all over it. 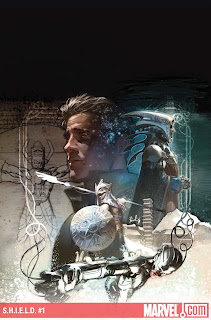 S.H.I.E.L.D. #1
Written by JONATHAN HICKMAN
Penciled by DUSTIN WEAVER
Cover by GERALD PAREL
Leonardo Da Vinci was an agent of S.H.I.E.L.D. So was Issac Newton. So were Imhotep and Zhang Heng and Galileo and many other geniuses throughout time. They were the first heroes to defeat Galactus and the Brood and turn Celestials back. They saved the world long before Captain America or Iron Man were ever born, but what does this mean to our heroes of today? What does this mean to Nick Fury? Do not miss this Marvel Comics masterpiece that fans will be talking about for decades to come. All the insanity is courtesy of JONATHAN HICKMAN (FANTASTIC FOUR, SECRET WARRIORS, Nightly News) and DUSTIN WEAVER (X-MEN). 40 PGS./Rated T+ …$3.99
Jim: I hope this is not just a one shot as I would love to see a SHIELD series, especially with Jonathan Hickman as the writer. So far Hickman has been doing a good job on regular super hero comic while still maintaining his own identity. Although I miss his indy work.
Lee: I'll like it if it can be somewhat independent of the Avengers. But, I'll doubt they'll do that which will make this Avengers: West Cooo... I mean Avengers: SHIELD. 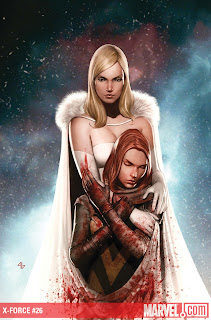 X-FORCE #26
Written by CHRISTOPHER YOST & CRAIG KYLE
Penciled by MIKE CHOI
Cover by ADI GRANOV
Variant Cover by DAVID FINCH
RIP VARIANT by TBA
SECOND COMING, CHAPTER FIVE
As the X-Men make their desperate attempt to get Hope to Utopia, the battle will cost them one of their own. Nothing will ever be the same. 32 PGS./Parental Advisory …$2.99
Lee: Nothing screams buy me like chicks groping each other on the cover. Oh wait, they’re just hugging. Completely different. Oh sorry, they’re just hugging and smearing blood on each other. WTF??
Jim: I have to agree. WTF?? Still after this issue nothing will ever be the same. Love the over hype that companies give you. After awhile it becomes meaningless. Plus I have to say that the variant cover thing was already overdone and now Marvel has as many variant covers as Zenoscope (Grimm Fairy Tales). 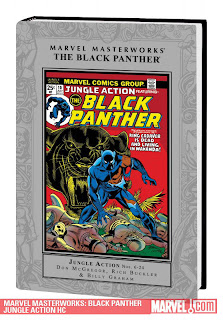 MARVEL MASTERWORKS: BLACK PANTHER JUNGLE ACTION HC
Written by DON McGREGOR
Penciled by RICH BUCKLER, BILLY GRAHAM & GIL KANE
Cover by GIL KANE
Collected for the first time ever, the MARVEL MASTERWORKS bring you the ground-breaking, trend-setting Black Panther from JUNGLE ACTION! In 1973 comics’ first African super hero took the headlining slot in an ambitious ongoing series, beginning a 13-issue epic unprecedented in its time. Writer Don McGregor teamed with artists Rich Buckler and Billy Graham to tell “Panther’s Rage,” a story so huge it ranges across the savannah, into the deepest jungles and up to the snow-topped mountains of Wakanda. Over its course McGregor & Co. would define T’Challa, give full depth and life to the Wakandas and their culture, while pitting the Panther against the murderous Erik Killmonger for control of the kingdom. Not one to rest on his laurels, McGregor then set out to raise the bar once again, sending T’Challa to the American South to investigate the murder of Angela Lynne and its connection to the Klan and the history of the Soul Strangler. A challenging storyline by a challenging storyteller, you’ll read it and so much more in this much anticipated hardcover classic! Collecting JUNGLE ACTION #6-24. 352 PGS./All Ages …$64.99
Jim: I’m really looking forward to this book. I know Don overwrote most of his books, but it was a good series and I’m glad it is getting the Masterworks treatment.
Lee: I'll get this but I'm not sure I'm gonna like it. I have all the original issues so I dug them out last night. The pictures are very, very pretty but it reads like a novel. 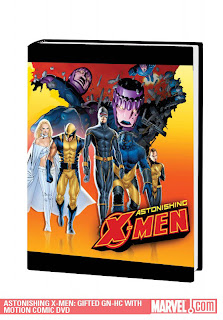 ASTONISHING X-MEN: GIFTED GN-HC WITH MOTION COMIC DVD
Written by JOSS WHEDON
Penciled by JOHN CASSADAY
Cover by JOHN CASSADAY
Dream-team creators Joss Whedon (TV’s Buffy the Vampire Slayer) and John Cassaday (Planetary, CAPTAIN AMERICA) present the explosive, all-new flagship X-Men series – marking a return to classic greatness and the beginning of a brand-new era for the X-Men! Cyclops and Emma Frost re-form the X-Men with the express purpose of "astonishing" the world. But when breaking news regarding the mutant gene unexpectedly hits the airwaves, will it derail their new plans before they even get started? As demand for the "mutant cure" reaches near-riot levels, the X-Men go head-to-head with the enigmatic Ord, with an unexpected ally -- and some unexpected adversaries -- tipping the scales! Collecting ASTONISHING X-MEN #1-6 plus a DVD featuring the ASTONISHING X-MEN: GIFTED motion comic. 176 PGS./Rated T+ …$24.99
Jim: The motion comic was horrible from what I saw of it. One thing people have to realize that a motion comic is a different animal then a comic. Dialogue that you read may work, but not when said out loud. Also certain shots done for a comic should be edited or modified to make it work for a motion comic. Still a lot of work to do to make this a viable entertainment form.
Lee: This is perfect for one of the primary rules of life, "If you say it out loud, and it sounds like a bad idea, then it is a bad idea." True comic book dialogue never sounds good out loud. 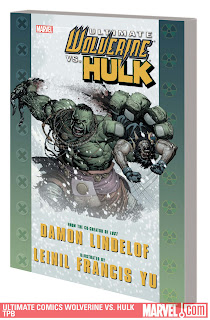 ULTIMATE COMICS WOLVERINE VS. HULK TPB
Written by DAMON LINDELOF
Penciled by LEINIL FRANCIS YU
Cover by LEINIL FRANCIS YU
It’s the unstoppable Hulk vs. the unkillable Wolverine in the biggest fight the Ultimate Universe has ever witnessed! S.H.I.E.L.D. head Nick Fury thought he’d killed the Hulk’s alter ego, scientist Bruce Banner. But now, the tower of rage and green muscle is rampaging across the globe. Fury has a long list of operatives at his disposal. But there’s only one man capable of doing this job right: Wolverine! With razor-sharp claws, unbreakable Adamantium bones and a healing factor that can shrug off wounds that would kill lesser men, Logan seems the perfect match for the Hulk. But in their first encounter, the Hulk shows him the meaning of raw power — by ripping Wolverine in half! Can either man survive this fearsome reckoning? And if so, will they ever be the same again? Collecting ULTIMATE WOLVERINE VS. HULK #1-6. 144 PGS./Rated T+ …$19.99
Lee: Fine, I will admit that I want to read this. It sounds like it was fun in a pointless action sorta way, but I don’t want to pay more than a dollar for it. Ebay here I come.
Jim: Good luck on getting it for a $1. I think that will take a year or so to happen.
Jim: Not a lot that I’m looking forward to from Marvel this month, but I’m curious as to what the “Heroic Age” will be all about.
Lee: Well, this was supposed to be Jim's month for picking all the Marvel books. I just can't stop making fun of Marvel. Maybe next month I'll find less to bitch about.
Posted by Jim at Thursday, February 18, 2010