I should really thank Lee for this one.  (Thomm writing here.  Blog issues caused this to go up under Lee's name.)

It’s a wonderful reminder of why I don’t read Marvel anymore. 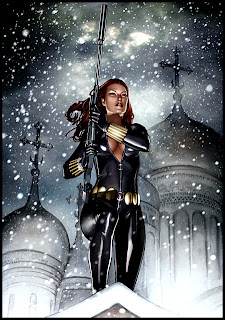 Black Widow: Deadly Origin by Paul Cornell, Tom Raney and John Paul Leon is more amusing than it has a right to be. It’s a strange attempt to clean up the history of a character who has been so manipulated and convoluted over the last 50 years that she’d have to spend the rest of her life in a maximum security mental facility if she were a real person. In fact, it’s the total removal from any semblance of reality that, in the end, makes this read so unsatisfying.

Granted, my experience with the Black Widow is largely limited to the Miller and Mazzucchelli era of Daredevil. Then she was a strong, well balanced individual. In fact, she was something of a touchstone of sanity for Matt Murdock during his first run of dark stories. I think I’ll hold onto those stories for my view of the character and leave this aside.


So, here’s the story. Someone’s trying to destroy the Black Widow through something called Icepick Protocol, which launched out of the remains of Russian security. The operation particularly targets her loved ones and close associates, past and present. The first to go is Ivan Petrovitch, a longtime colleague who she views as a father figure. And when I say a long time, I mean a really long time.

Jim has frequently mentioned that Marvel’s time line of stories seems to put the origin of characters 10-15 years in the past, regardless of where we are in the present, but, like Captain America who’s still supposed to be a veteran of WWII, the Black Widow is still supposed to have been born in 1928 in the Soviet Union. A Soviet version of the Super Soldier Formula has kept her and Ivan young, with her in her 30s to all appearances and Ivan in his 50s. The character’s first appearance was in 1964 so the Super Soldier Formula explains a lot for her but what about all the characters she met in the 1960s and onward who don’t have these life extending formulas?

See, that’s the thing with this story. It doesn’t reboot the character. It tries to explain all her various permutations since 1964 into one convoluted story of betrayals, institutionalizations, revivals of the program that created her to create others who sometimes substituted for her, and on and on. Hell, Bucky Barnes ends up in there at several points, and I still like it better when he was just dead all those years after WWII.

But if she’s been around as a Marvel character since 1964 and met many of the current characters a long time ago, she couldn’t have done so because they’ve only been around 10-15 years. It’s a time conundrum. I hate time conundrums.
But, even leaving that aside, the story’s not much. The villain is easy to see a mile away if you have any experience reading super hero and super spy works. His motivation as a spurned lover is unintentionally hilarious, too. At least I think it’s unintentional. Here’s this woman who’s had nothing but poorly pursued and badly ended relationships, and who’s made it clear she’s not romantically interested in him, but he’s sacrificing his own humanity and trying to kill everyone around her before killing her. It’s a Rube Goldberg revenge. I suppose it’s de rigueur for comic book super hero villains, but it just seems funnier than it’s supposed to be.


Ah, well. At least it looks nice. Raney does all the scenes in the present in a very clean style while Leon does the various flashbacks in a rougher edge. That part reminded me of the Miller years, which was nice.


I don’t think reaffirmation of why I avoid Marvel super hero comics is what they were going for, though.