Some odds and ends From Lee

Some odds and ends that Lee sent me recently.  This is Thomm, by the way.  A recently blog difficulty ended up with this being posted under Lee's name.

Higher Earth 1 from Boom! Studios is by Sam Humphries and Francesco Biagini. Strangely enough, I got the last issue of Incorruptible after getting this issue from Lee, and there’s a preview for it in the back of Incorruptible. Seems a bit of the cart before the horse to have a preview when the issue is already out. This book is a future sci-fi story with a lot of explosions and constant fighting. There’s a Sliders sort of thing going on with travel between parallel Earths, but that’s about all I got out of it. There’s not much in the way of character development so far.

G.I. Combat 1 from DC has work by J.T. Krul, Justin Gray, Jimmy Palmiotti, Ariel Olivetti, and Dan Panosian. The front end story is The War that Time Forgot by Krul and Olivetti. It’s very pretty but makes no sense so far. On physics alone I couldn’t figure out some things. For one, how is a pterodactyl flying in from above on a helicopter and not being torn to pieces by the rotor? The second story is another version of The Unknown Soldier. This one’s in Afghanistan when he’s “created”. Unlike the original character, we’re getting a back story to know who he is right away. I don’t know if that’s going to work. Some of what was great about the original was that he was a cypher. In the more recent Vertigo version in Uganda it was an entirely different sort of story, too, with the only similarity to this one being that we knew who the soldier is. Gray and Palmiotti, with Panosian on art, may get this moving into something interesting, but it’s not there yet.

Spider 1 from Dynamite is by David Liss and Colton Worley. It and The Shadow 1 & 2 by Garth Ennis and Aaron Campbell, also from Dynamite, have the same theme going. Bas ically, a largely forgotten old character, and the Spider is more unknown than The Shadow, is revived as a Punisheresque killing machine. I don’t know why I’m supposed to like these characters, as a reader. They’re angry. They’re unrelenting. They’re indiscriminate. They’re also uninteresting. I can go around shooting people who offend me. Doesn’t make me interesting to read about or worthy of some sort of adulation. Not my cup of tea, either of them. 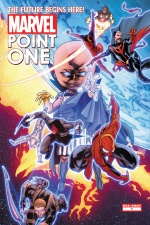 Finally, we had Point One, a one shot from Marvel. It reminds me of the old History of the DC Universe that was put out after Crisis on Infinite Earths so that readers could get up to speed on the status quo at DC, post all the big changes. This isn’t nearly as comprehensive, though. There are just little look-ins on various characters, via the deus ex machine of a couple of guys raiding The Watcher’s place while he’s doing some sort of download to his home planet. Nova, Age of Apocalypse, Scarlet Spider, Coldmoon & Dragonfire, Doctor Strange, and The Avengers are all visited. I know nothing about Scarlet Spider or Coldmoon & Dragonfire. The latter appeared interesting, if improbable. After seeing Scarlet Spider I have to wonder if there are any heroes in the Marvel U that don’t have some nefarious knock off running around, or at least who’s now being reformed into some sort of flawed hero, which is kind of funny, considering Marvel specialized in flawed heroes from the beginning.