Thomm: What will Lee’s mysterious reasoning for picking books be this time? Or are we back to the totally random?

Gwen: We may never know since Lee's power is out. 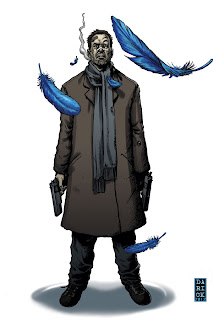 HAPPY! #1 (of 4)
story Grant Morrison
art / cover Darick Robertson
32 Pages / FC / $2.99
Meet Nick Sax - a corrupt, intoxicated ex-cop turned hit-man, adrift in a stinking twilight world of casual murder, soulless sex, eczema and betrayal. With a hit gone wrong, a bullet in his side, the cops and the mob on his tail, and a monstrous child killer in a Santa suit on the loose, Nick and his world will be changed forever this Christmas. By a tiny blue horse called Happy...
Lee: I’m waiting for the trade on this one but Morrison uninhibited by any type of continuity is always a good thing.
Thomm: Or not. I’m not the Morrison fan that certain other writers on this blog are. Too much self-absorption for me. 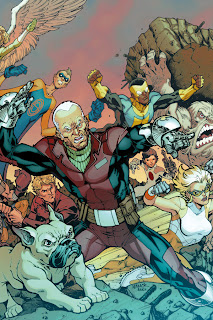 GUARDING THE GLOBE #1
story Phil Hester
art / wraparound cover Todd Nauck - John Rauch
32 Pages / FC / $2.99
The Guardians of the Globe are BACK in an all-new, all-exciting ongoing series! Your favorite heroes – Brit, Outrun, Invincible, Robot, Yeti, Kaboomerang, and more –face new challenges of epic proportions in stories by the all-star team of Phil Hester - Todd Nauck!
Lee: Didn’t you read the last Guardians book? I can’t imagine there is that much demand for this but maybe the last series was that good. Thomm, it’s up to you to see this one.
Thomm: No, the last one was a major disappointment. This is a new creative team, so maybe it’ll go in a better direction, but from what I can tell we’re looking at the same villain lurking in the shadows, and he was the main disappointment with the last series. I’ll be skipping this. 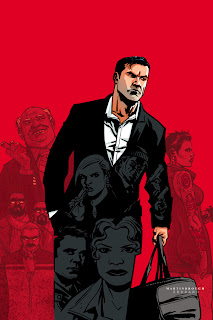 THIEF OF THIEVES, VOL. 1 TP
story Robert Kirkman - Nick Spencer
art/cover Shawn Martinbrough - Felix Serrano
152 Pages / FC / $14.99
Conrad Paulson lives a secret double life as master thief Redmond. There is nothing he can't steal, nothing he can't have... except for the life he left behind. Now with a grown son he hardly knows, and an ex-wife he never stopped loving, Conrad must try to piece together what's left of his life, before the FBI finally catch up to him... but it appears they are the least of his worries. Collects Thief Of Thieves #1-7
Lee: 152 pgs for $15? Sign me up! I don’t think people have loved it as much as they thought they would, but that’s a whole lotta book for not that much money. It’s worth trying at this price.
Thomm: It’s been a good book so far. As of this writing it’s up to the 5th issue, so I’ll be able to say more on it once it hits 7 and has wrapped the first arc. I rather like the cop chasing the protagonist better than the protagonist in this book. 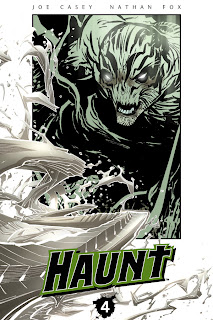 HAUNT, VOL. 4 TP
story Joe Casey
art Nathan Fox - John Lucas
cover Nathan Fox
140 Pages / FC / $14.99
In a bold new direction writer Joe Casey and artist Nathan Fox flip the Haunt series on its head. Still figuring out their newfound ability, brothers Daniel and Kurt Kilgore start experiencing the dark side of their powers, and no one is safe. Collects Haunt #19-25
Lee: Huh? Who? How come this is 7 issues for $15, just like Thief above but this is only 140 pgs? What’s the difference? Anyway, I really like Casey, and I really like Fox-Lucas and that may be enough to overcome my lack of caring about Haunt. Casey is so hit-miss that this will either be great or just plain awful.
Thomm: It can’t be worse than the original team. Not enough Kirkman and too much McFarlane, I think. No surprise there, considering how extended Kirkman is these days, but I gave away that entire run as soon as it ended. 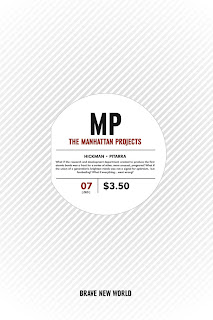 THE MANHATTAN PROJECTS #7
story Jonathan Hickman
art Nick Pitarra - Jordie Bellaire
32 Pages / FC / $3.50
"Above And Beyond" At a top Secret meeting in Iceland, the Americans and Russians have a world-shattering encounter with the Science tyrants of the Manhattan Projects.
Lee: I think this is a good book, or at least rumor has that it’s a good book, but wow are these covers dull. The first one was unique but this is the third variation of the exact same thing. Dull dull dull.
Thomm: I wasn’t impressed with the previews I read and haven’t heard anything since it’s been ongoing. I’m not a big Hickman guy, either, so I can’t really say if this is worth getting.

Thomm: A lot of single issues or recently collected new series in the picking this month. I think Thief of Thieves is the best bet in the bunch.

Gwen: You can all thank me for the pictures!