Last week it was an oddball Marvel series, this week it's DC's turn.  The series in question is Chain Gang War, written by John Wagner, art by Dave Johnson.  Is the series any good?  I'm not sure but I remember loving it when it came out.  I'm sure it's in the 25c bin these days and it's definitely worth checking at that price. 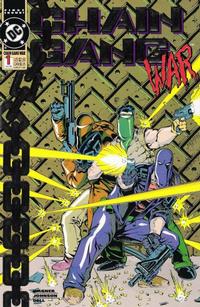 Chain Gang War #1, July 1993
Pencils: Dave Johnson
Inks: Karl Story
This cover is fine but not great.  It's foil embossed and was meant to draw the reader in.  But beyond the foil effect, it's really generic.  You'll understand why I chose it later. 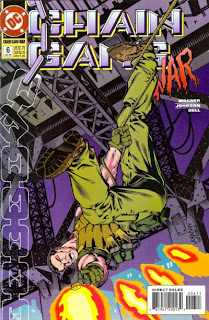 Chain Gang War #6, December 1993
Pencils: Dave Johnson
Inks: Karl Story
By issue 6, you can start to see Johnson getting the hang of things.  The linework that would make him famous is starting to emerge. 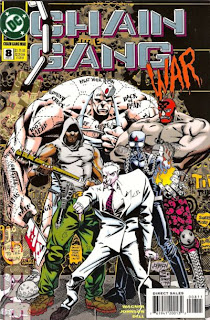 Now this is just fantastic!  Johnson on pencils and Bradstreet on inks.  This is GREAT.  It's amazing that a good artist/inker team can make even the strangest villains interesting. 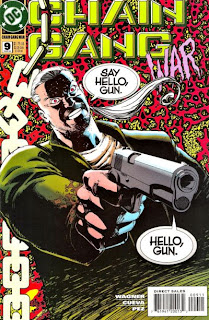 Pencils: Dave Johnson
Inks: Dave Johnson (?)
I love the sick humor of this cover.  It's obvious there's alot of violence within the pages but this seems to mitigate it somehow.  Who am I kidding? It just made me want to read it more.

But, a very interesting technical detail, our hero's jacket isn't ALL black.  If the entire coat had been black, then the cover would have been too black.  But neither would the green work because it would cause the reader to lose focus on the gun.  The answer, just a hint of color with the gun almost entirely surrounded by black.  Very good stuff. 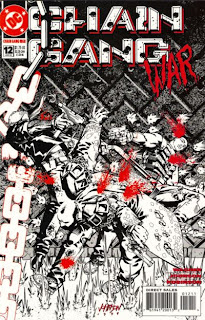 Pencils: Dave Johnson
Inks: Dave Johnson
Bringing it round full circle, we have the cover to issue 12.  I really enjoyed this because the series was ending.  The foreshadowed events were coming to pass and it ended in a very believable way.  Having this cover mimic the first issue was a great idea.

If you've ever wondered what impact an inker has on the final product, all you need to do is look at this cover (inks Johnson) to the first issue (inks Story) and it's obvious.

That's it for this week, now go out and root for the Patriots!