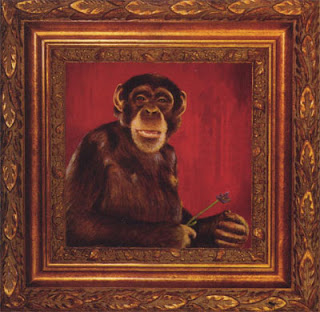 There are few things worse in life than 'the talk'.  Up until this point, Wife and I have managed to avoid it.  Unfortunately, with everything going on and kids talking to other kids, it was time.  Actually, it was well past time so over the summer, we explained evolution to them.

That's right, we explained the theory of evolution and the scientific basis for it.  In a nutshell, we explained how everything we know about man has come from this little theory.  We also had to explain that not everyone believes in it which led to another long, long discussion.  But, that is a topic for another day.  At the end of our family discussion, the kids understood the basics and that our family believes in evolution.

Soon after, we were at the pool, and Tiny swam over to me with a gleeful look in her eye.  She motioned me closer and whispered into my ear, "Daddy, Daddy, I can prove evolution to all the people who don't believe."

To say my curiosity was piqued is an understatement. "And, how would you do that?" I asked.

Tiny looked around conspiratorially, fixed her eyes on the biggest, hairiest man I had ever seen and POINTED. "Look at him Daddy.  He's got hair everywhere.  He's even got hair on his back so he must have come from monkeys.  See Daddy, he proves evolution."  And with that, she swam off happy as a clam that she had proven the theory of evolution.

Well, it's hard to argue with such logic.  I'm just glad the man didn't see her pointing because he would have killed me.

Anyway, as for books, this week I read Prophet Vol 1, Glory Vol 1, Peter Panzerfaust Vol 1, and The Bulletproof Coffin.


You can see what I thought of the rest of the books below the break. 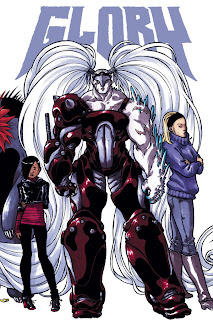 Let’s start the reviews off with Glory Vol 1: The Once and Future Destroyer, written by Joe Keatinge and illustrated by Ross Campbell, published by Image, 144 pgs, $10,

Why start with Glory? Because I am sure that is what you are asking me! Why the heck would anyone want to read about a watered-down, Rob Liefeld created, Wonder Woman clone? Honestly, I can’t tell you why I picked this up. Maybe it was the buzz coming off of Prophet (which I talk about later) or maybe it was just a general vibe. I don’t know my reason but I am glad I did. Just as Alan Moore did with Supreme, this is the best non-Wonder Woman story on the stands.

Keatinge writes a tight tale with just enough future events to make the reader aware that everything is going to end badly.  But there's enough sense of hope that it will all work out.  Beyond a tight story, I think his Wonder Woman Glory is just perfect.  She is the second most powerful being in her universe.  She was raised, and endlessly trained, to be nothing but an engine of destruction.  Can she change?  Probably not but it's fun watching her try and not succeed.

The art by Ross Campbell is awesome too.  He draws real women.  And I mean R-E-A-L women!  Glory isn't a supermodel in a bikini fighting bad guys.  She's a huge beast of woman full of muscles and plain old mean.  It's a welcome sight to see (semi) real proportions.  It should be noted that Campbell achieves this by using thick black lines.  It creates depth and size on the characters that make them leap off the page.  When Glory goes nuts and starts destroying enemies left and right, it's believable.

If you're looking for a great story with tight art then look no further. 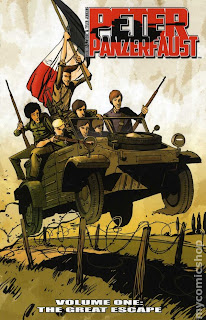 I wanted so much to like this book. I really, really did but it just didn’t happen. I’ve come to the conclusion that war books bore me. There’s way too much reality in them. I want my books to be huge and fun and have big, huge fantasicles that make me go ooooohhhh and aaaahhhh. Sadly Peter has none of this.

The premise is Peter Pan battles nazis in WWII.  Based upon that description I expected... I don't know.. more?  I expected some magic.  I expected some wild settings.  What I got was a standard war stories with a boy named Peter.  The problem is that I could have swapped Peter for a boy named Greg who is overly enthusiastic and really lucky and it would have been the same book.

The art didn't help either.  It was technically competent but not very exciting.  It reminded me of a watered down version of Ted McKeever during his Eddy Current days.

Sadly, I can't recommend this book. 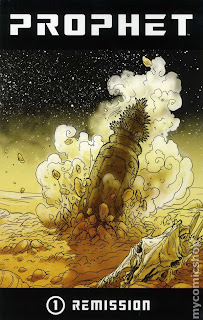 Let me just state for the record that this book is insane. Lots of stuff happened which impacted all sorts of other stuff and was in some really odd way all connected. See, I can’t even write about it coherently.

Remember how Alan Moore took a crappy Superman rip-off (Supreme) and wrote some of the greatest Superman stories ever? Well Graham has done the same with third tier throwaway character Prophet. It’s a book of great big Kirby-esque ideas mashed up and spit back out. I’m not saying you’ll completely understand it (I sure didn’t) but you will have a heck of a great time getting there. Where ever that is. Anyway, I wrote a long review here. 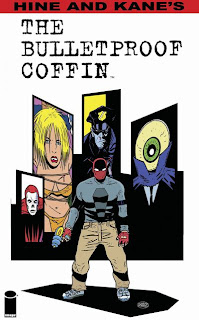 Also, I read The Bulletproof Coffin, written by David Hine and illustrated by Shaky Kane, published by Image, 200 pgs, $18.

You can read the long review here.

Email ThisBlogThis!Share to TwitterShare to FacebookShare to Pinterest
Labels: Daily Life, What I read this week