It's hard to believe that Harvey Comics, who produced such classics as Richie Rich, Casper, and Hot Stuff produced some of the best horror comics of the Golden Age.  But, it's true and the only books that were better than the Harvey Horror line of the early 1950's were the books from EC.  I mentioned on Friday that these were being reprinted by PS Artbooks and were available for pre-order.

Now, a selection of some of the best (most gruesome) horror covers of all time! 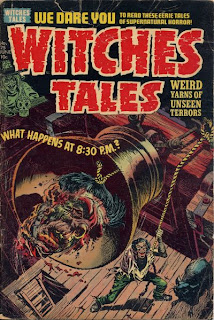 This has got to be one of the most gruesome comic book covers ever.


Jim: I love these old lurid covers. This was back in the days before the code and everyone was trying to outdo each other. 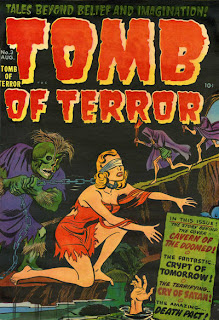 Tomb of Terror #3,  August 1952
Cover artist unknown
Not one of the classics but a hint of things to come.  Let see if you can find all the things that would make a Mom mad in 1952.

Did you pick:
(1) Scantily clothed woman?
(2) The bondage theme with the blind fold and dog collar?
(3) The mention of Satan on the cover? 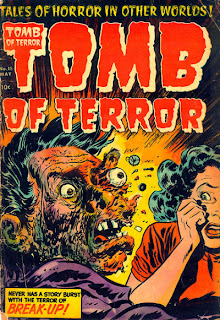 Tomb of Terror #15, May 1954
Another of the all time classic horror covers, the exploding face!

Jim: Nice to know the classics never go out of style. 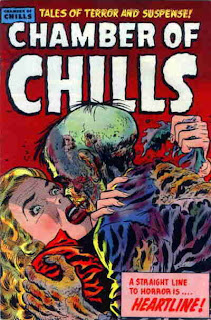 Another classic!  Harvey was on a roll in 1954!  In this case we have a spoof of all the romance books that were flooding the stands at the time.  But, because this was primarily aimed at boys... we have a zombie.

Jim: Lee Elias is one of those underrated artists. He did tons of work for a lot of companies and it was always professional and solid work. 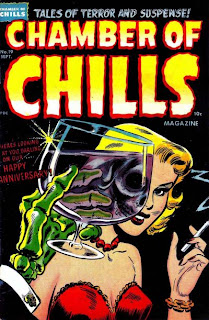 I love the subtlety in this cover.

Jim: I would guess Kremer. Even though many companies do all the variants to try and generate sales via retailer orders of the catering to the collector mentality, in the fifties the cover was everything and you only real chance to sell you book on the newsstand. This was a winning cover.
Posted by Lee at Sunday, September 02, 2012