ECONOMIX: How Our Economy Works (And Doesn’t Work) in Words and Pictures – A Review 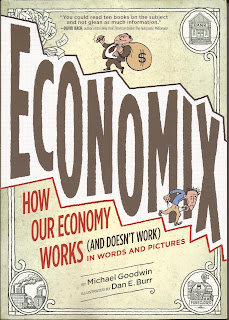 As I mentioned last week, I haven’t had much time lately to read my weekly comics.  That all is about to change, because I just finished reading Michael Goodwin’s highly enthralling Economix.  It’s been on my nightstand ever since I brought it home and I would generally read a chapter a night before passing out into my normal 5-hour sleep cycle.  Eight chapters in eight days with plans to reread it again soon after letting my wife and high schoolers read it next.  It was so jam packed with information that I couldn’t absorb it all the first time around.  Plus, it was just so enjoyable.  Sound impossible for a book basically explaining in detail the history of the U.S. economy?  Well, Michael and Dan (with his wife Debra handling the voluminous amount of lettering) not only make it look easy, they make it so understandable (as much as humanly possible anyway) and entertaining.


I’m no economist (see * below). I only know what I've experienced first-hand or observed and heard second or third hand.  Honestly, I don’t have time to delve into such a massive subject (no matter how important it is) myself.  However, I know enough to realize that our economy has serious, deep rooted problems.  But at least now I have a better perspective on how we got into the present mess.  This book is really a milestone achievement, because it has the potential to educate millions of people.

Michael narrates the history with his own comic avatar, always speaking directly to the reader with frank and honest dialogue.  He admits upfront that any economic book is going to be colored by the author’s perspective.  The great thing about Michael’s research is that he took the effort to delve into the source writings of the classic economists (or whatever they were called at the time), instead of just relying on someone else’s regurgitated view of what they said.  Michael’s not the only character of course.  Much like Action Philosophers, economists, Presidents, businessmen, etc. show up repeatedly in easily recognizable caricatures.  The expressions on faces, the reactions and common sense questions or responses to some of the ridiculous decisions people are making are wonderful.  You get history, theory, charts, and commentary all rolled together.  Michael’s up front about where he’s coming from and it was funny how he explained that italics and quotations mean real quotes, but everything else “[he’s] putting words in people’s mouth”.

The best way to give you an insight on what is discussed is to just list the chapter headings:

You also get a full Glossary and a recommended reading list.

Here’s an example of Michael’s straight-forwardness from page 199 near the beginning of Chapter 7, a turning point in the book.

“Now here’s the thing: I’ve been taking political stands all along.  But up until now, this book might not have seemed all that political, because the past is over.  Saying Slavery is wrong isn’t very controversial today.

At least among sane people.

But if this book had come out in the 1850s, that point of view would have been plenty controversial” [Panel of Michael running from a mob with torches and pitchforks.]

I’m confident that today’s justifications for extreme inequalities of wealth and power are horsepuckey, just like yesterday’s and will fade away as completely.

But for now, many people disagree, which means this book is about to get more controversial.  So be it. [Panel of Michael running from a modern mob]

Michael definitely leans to the left and while he mentions missteps by Presidents from either party, you can tell he’s less critical of the Democratic ones.  And it seemed to me that he rarely addresses as much the role Congress had in these issues (Presidents don’t govern in a vacuum).  Granted economics effects everything in some way, but the way it’s presented you might get the impression that it’s the primary factor all the time and the world is more complicated than that.  It’s similar to when Randy Bachman mentions a song on Vinyl Tap and talks about the drums; you hyper focus on the drums in the song.  If he mentions the same song in another show and focuses on the guitars, you hyper focus on the guitars. (I LOVE Vinyl Tap and consider myself a "Tap Head".)  I think that is what’s going on here.  While most of his observations and commentary are valid (they’re always sincere), some you have to take with a “grain of salt”.

The hardest chapter for me was the last one.  After covering over 200 years of history, he talks about the last eleven, which includes 9-11, the War on Terror, the present recession, etc. He even spends a lot of time on really recent events like the Tea Party movement, Occupy Wall Street, Global Warming, etc.  I think we don’t have enough perspective on some of those events yet, like we do in most of the rest of the book.  But that’s just what he warned the reader about in the quote above.  It will be interesting to see a revised edition ten or twenty years down the road to see what happens.

Regardless of whether or not you agree with his political views or not, his intent is a noble one.  He wants this to be “a foundation for further reading, observation, and thinking”.  He accomplishes that goal in spades, which is why I’ll be recommending this book to everybody.  I think it’s a sure bet that he won’t have to worry about his finances from here on out.

GRADE A+: THIS IS A MUST READ!  And remember, it’s fun too…and sickening when you see what people will do for their own selfish greed.

New International Version (NIV)
10 For the love of money is a root of all kinds of evil. Some people, eager for money, have wandered from the faith and pierced themselves with many griefs.


Now for my own short commentary:

I think both political parties are so entwined with big business that neither one will be able to completely fix the ailing economy.  Although, I sure hope we can get some decent change to it soon.  I also think that both political parties are unfairly demonized by their opposing side. There are a lot of good intentions around, just different ideas on how to implement them. (Just talk to your co-workers and friends of a different political affiliation.)  We're not always going to agree and there are some issues that can't be compromised on either. However, good stewardship of resources and the environment and compassion toward others is key (they also happen to be Biblical principles as well).

*I'm a licensed professional civil engineer by trade with 15 years specialty experience in highway traffic noise and consider myself a keen observer both at work and in my personal life.  I have no problem with the scientific method and I have to use models to explain things I can't observe directly all the time (like predicting future noise levels).  I'm also a born again Christian (I know adding the born again is redundant) who has observed the Holy Spirit at work in changing my life and the lives of others, most notably my best friend and wife of nearly 20 years. I mention this picking up a thread that Thomm and I had a few weeks ago.  Basically, you CAN follow the scientific method and still believe in the Biblical account of Creation.  And that's the last I'll say on the subject for awhile.  Thomm, you're going to LOVE this Economix book!
Posted by Matthew at Saturday, October 20, 2012