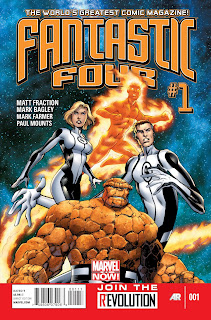 Fantastic Four #1 by Matt Fraction, Mark Bagely and Mark Farmer was a great start.
I had fallen off the book as I believe Jonathan Hickman had finished his story about six months ago or so and the rest has been filler as we moved towards Marvel Now.

Any comic is a mixture of writer, art and characters. Matt Fraction has not been a favorite writer of mine, but I feel his work has been getting better and better. Hawkeye is his latest work and his best so I was cautiously optimistic on that front. Matt delivered the goods with this story. He has kept all that has gone before with the Future Foundation and the feel of family remaining at the core of the story. Johnny still controls a large portion of the Negative Zone and apparently has the cosmic rod in his control. We start out with an adventure in the past and Reed has an injury to his arm unlike anything he has seen before. When they get back Franklin has a premonition about going into space, so of course the FF and the families are going to travel into space and explore different universes. The great part is that Reed has discovered that the unstable molecules that give them their powers are now degrading and is killing him and maybe killing the rest of the group. Of course Reed instead of trusting his wife and friends wants to hide it from them as he searches for a cure amidst the subterfuge of exploring and teaching the kids.


The premise is a good one that allows the Fantastic Four book to be a thing unto itself and sets the premise for the sister book to be a different and advertised oddball group of replacements while they are gone. They are going to be gone a year per the storyline which could be twelve issues or more. Of course Reed says since time moves differently so they may only be gone a short time. That was my main quibble with the book. In comic books trying to equate anything to real time just gets you caught up in trouble and invites readers to nitpick stuff. I’m sure I will notice some time issues now that I would never have worried about if not mentioned.

The second element is art and Bagley and Farmer make a great team. I have never been a huge Bagley fan but appreciated that the man can produce a monthly book and his layouts and storytelling are top notch. The style of his work is solid but often uninspiring. That seems a little harsh because I do enjoy his work, but he is never a factor in making me buy a book. Mark Farmer’s inks added that little extra something that make this some of Bagley’s best work ever. Mark adds a little more depth and flourishes to Bagley’s work that puts it over the top and makes me appreciated Bagley.

The last element is the characters. The FF was a favorite of mine growing up and I have still enjoyed the characters. My problem is they are stuck in amber. We are now fifty years in and nothing has really changed. What this means is I can leave the book at anytime, but as long as it is a good story I can also enjoy hanging out with old friends.

A very good issue that has me back on the FF bandwagon.
Posted by Jim at Tuesday, November 20, 2012